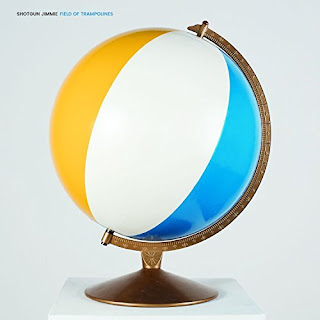 If you’re in the mood for some good, fun rock and pop tunes, with some interesting topics and unusual lyrics, you should definitely check out Shotgun Jimmie’s Field Of Trampolines album. The music has a joyous, youthful vibe – youthful, that is, without being stupid. It’s more about the energy and the sense of excitement, the sense of play. Youthful in that way. This album features original material, and these songs have plenty of great lines, some that made me laugh aloud, like these from “Project 9”: “It’s no one’s fault/All right, it’s mine” (his delivery of “All right, it’s mine” is perfect). And nothing is too polished; there is something of a raw punk energy here, which I appreciate. The band is Shotgun Jimmie on guitar and vocals, Jory Hasselmann on guitar and vocals, Marie-France Hollier on bass and vocals, and Cole Woods on drums and vocals. Joel Plaskett, who produced the album, joins the band on guitar, vocals, tambourine, organ and piano.

A few moments into CD’s opening song, “Join The Band,” I just started smiling. The music overtook me. Here is some good rock music that has a sense of play, a sense of enjoyment, and encourages everyone to join in. “Join the band/Come on tour/Get in the van/What are you waiting for?” It’s a song that mentions various places, and is certainly a song you want on your playlist if you’re traveling around to see a band (as we’ve all done at one point or another). There is some delightful goofiness, like these lines about the soundcheck: “Line check, mike check, soundcheck, mindset/Checkity check before you wreckity wreck.” And at the end, this song simply rocks. That’s followed by “Georgia OK,” about Georgia O’Keeffe. I dig how the bass is used in this song. “I’m losing sleep over Georgia O’Keeffe/I can’t compete, no, I can’t compete.”

I love word games. I tend to play Boggle more often than Scrabble these days (mainly because of the time involved), but once belonged to a somewhat casual Scrabble league. So when I first glanced at this CD’s track list, “Triple Letter Score” stood out as something I was excited to hear. In this one, Shotgun Jimmie sings, “Triple letter score wasted on a vowel.” Ah, only three points. But the song is mainly about camping at the beach, and it’s getting me excited about my own trip to Cape Cod (we won’t be camping, but we’ll be spending a lot of time on the beach). It’s a fun tune, and features some good lyrics, like these: “Find someone to love/Fall in love and fall apart/Get distracted by another/Change your mind and break her heart/As the sparks from the fire rise into the sky/Watch everything you know disappear into the night.”

“Field Of Trampolines,” the album’s title track, has something of a 1960s pop vibe, combined with touches of punk. This is a great sound for summer. “Are you ready for green/Are you ready for blue/Could you actually ever be blue/Do you know what I mean/When I’m telling you/I could actually never be blue/In the fields of trampolines.” That’s followed by “Love Letter,” which has kind of a quirky sound, thanks in large part to the addition of organ, which I love. But that vibe is also because of the song’s lyrics. Here is a taste: “I didn’t want to fail ya/You took me to Australia/And everyone got sick/We went down to Florida/And everyone adored ya/It was so romantic.” This is one of my favorites.

“Song For Julie, Chris, Rick + Mark” is a fun tune to get you bopping around, coming at you at a good clip with a great punk vibe. “You seem so angry, and it completely breaks my heart/To know I could feel like that about anything/It’s probably not that smart.” It’s a punk length too, at like a minute and a half. The album then concludes with “Walkman Battery Bleed.” This one definitely takes me back to those days I spent at Cape Cod in the summer when I was a kid. “Back in the summer when we were younger/Pockets of sand that we brought home from the beach/I watched the waves move in slow motion/I let the Walkman drain its batteries.” And at one point there is a playful nod to “Heart And Soul” on piano. “Whatever makes you happy/Whatever gets you through the day.”

CD Track List
Field Of Trampolines was released on both CD and vinyl on March 18, 2016 on You’ve Changed Records.
Posted by Michael Doherty at 2:03 PM