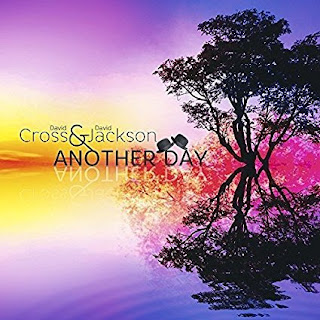 David Cross is electric violinist known for his work with King Crimson, and David Jackson, who plays flute and saxophone, is known for his work with Van der Graaf Generator. The two (who both also play keyboards) have joined forces for an intriguing album titled Another Day. This instrumental album features all original material, written by Cross and Jackson (with a few tracks co-written by band mates Mike Paul and Craig Blundell). Mike Paul is on bass, and Craig Blundell is on drums. These tracks take us on some wild journeys, creating entire worlds in the span of several minutes.

“Predator,” the album’s opening track, starts a bit chaotically, but once that funky rhythm is established, I am on board. This track mixes jazz and progressive rock, but with a twisted carnival vibe, which I love. It’s like a passageway to a strange, captivating, and perhaps dangerous realm. Watch your footing, mind your head. Then, with “Bushido,” we’re invited into a very different world, one perhaps more natural, but also darker, with denizens lurking about, checking you out from the periphery. There is something almost magical about this brief number. “Last Ride” begins with a more ominous sound and tone, with a heavy feel. Then suddenly, after a minute or so, it opens up into a wild landscape, with devils on trapeze, tossing poison darts at your feet to get you to move. And you have no choice but get caught up in the progress of the tune. There is some excellent playing on this cool track.

“Trane To Kiev” is an interesting track. It begins tentatively, cautiously, like taking small steps into an unfamiliar place. But then the music becomes bolder, even insistent. And the drums, when they come in, at first have a sort of an official feel. Then at one point things come to a sudden halt, with just a heartbeat remaining. The heartbeat continues as the world comes rushing in on it, spinning around. Then “Millennium Toll” comes in sounding like the ticking of time, or the dripping of water. Time suddenly fractures and disappears as the tune breaks through, rising forth with confidence. The idea of time is never gone, however, and comes in force toward the end, with what sounds like the striking of a great bell. That’s followed by “Arrival,” which has a more uplifting vibe to it and becomes rather beautiful.

“Mr. Morose” is a more bluesy tune, a sad and passionate yearning for something you feel the person knows he or she will never get or achieve. Yet, there is life in it. If not hope, then there is at least some sort of acceptance of the state of things. And, after all, it isn’t the end. That’s followed by “Anthem For Another Day,” which begins with a lone instrument raising its voice. There is some joy there, but it is when it is joined by other instruments that the tune really begins to feel cheerful. It becomes rather pretty and works to raise our spirits, with those repeated phrases raising us up more each time through, working in time with our hearts, our hopes. It feels like it is uniting us, and as it does, it becomes one of my favorite tracks. Wonderful.