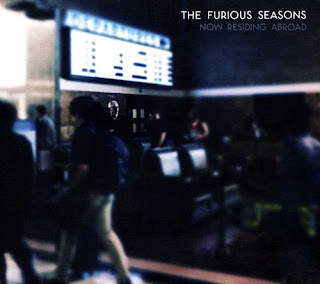 As the world continues to spin in discouraging directions thanks to Donald Trump and all the racist morons who support him, we turn to music for solace, for cheer, for some honesty, for signs of life, for something good. The Furious Seasons provide all of that on their new album, Now Residing Abroad. Even the title is appealing to a lot of us these days. Honestly, who hasn’t entertained the idea of leaving the United States since that horrifying election in 2016? But no, this is not a political album, though it certainly contains some relevant ideas and situations. These songs have vivid descriptions, with some excellent lyrics, with both warmth and wit, delivered by three talented musicians. The Furious Seasons are a Los Angeles-based trio consisting of David Steinhart on acoustic guitar, vocals, and percussion; Jeff Steinhart on bass and keys; and P.A. Nelson on acoustic guitar, slide guitar, electric guitar and vocals.

You get a sense in the first track, “Expo Line,” of how good this band’s lyrics are. “And I just got old, I didn’t realize/I was ripe to be among the downsized/Feels like an elevator that just dropped a dozen flights/Now I’m invisible in the plain daylight.” Los Angeles always seems to be growing and expanding. Even in just my immediate neighborhood, several new buildings have gone up in the last year, changing the look and feel of the place. Sometimes it feels like it’s changing without me, trying to push me out.  “Because these days there is no place that I need to be.” That’s followed by “So Sorry Adele,” which takes us to London to attend a concert there by a woman whose vocal cords snap. The line that always stands out for me is, “And a voice that could make you believe/In god or aliens.”

“Tethered” is one of my favorites. A lot of us can relate to this song’s opening lines, “The days of relative calm/Gave way to a season of storms/With less to fall back on/So much for our comfortable norms.” And I like this line: “Like you woke up in outer space.” The song is actually tender and loving. “I want to be your soft place to land.” Ah, yes. We all need that now, and I am thankful that I have it. Yes, the song turns out to be a love song, and it offers some comfort. “To be alive and be with you/The only thing I need be tethered to.” That’s followed by “The Loyal Canadians,” the song whose lyrics give us the album’s title. This one does mention the election, and so I suppose is the most overtly political, though, honestly, I don’t like to even use the word political, because what is happening these days extends far beyond politics into all aspects of our lives and of our nation’s personality. And the song is more about personal identity in a screwed up political climate than about the politicians themselves. “Before the election was set/The idle threats began/You’re all moving north/To become loyal Canadians/Though I’d never give over my land/For this idiot/Now residing abroad/I admit has a pretty nice ring to it.” And I love these lines: “It’s a been a long fall/All this anger, fear and doubt/And if they build that wall/It sure as hell won’t keep me out.” I particularly appreciate the double meaning of “fall.” This song also features some seriously nice work on guitar.

More wonderful work on guitar begins “Marathon.” And check out these lines: “Jet-lagged and windblown/You live by the light of your phone/More alone than when you were alone.” It’s interesting to me how the lines “The days fly away/And I know how badly you’re longing to stay” stand out, positioned as they are between two nice instrumental sections, giving them more prominence and weight. And toward the end, the lines “But if all goes as planned/I’ll be here when you land” remind me of a similar thought expressed in “Tethered,” and so those lines too are given a bit more stress than they perhaps otherwise would. And this is actually another good argument in favor of purchasing albums and listening to the songs in the order the artists chose, rather than just downloading specific tracks online. Sometimes ideas or lines or even words are repeated from one song to the next, developing themes over the course of an album. You lose that if you just download a few tracks. It depresses me when people in their twenties tell me they don’t own any albums.

“Status Quo” opens with the lines “The chaos subsides as the seasons change/And I will calm down enough to carry on.” Those lines hit me, because I wonder sometimes if carrying on is enough. I am torn these days between wanting to just carry on with my own life and wanting to get more involved with some sort of protest or revolution. You know? Bring those bastards down. That’s not really exactly what this song is about, but that’s where my thoughts went nonetheless. “I’m a machine that often needs a reset.” The album then concludes with “Come To LA,” in which they reach out to someone who needs a change. It’s a song that offers comfort, offers a hand. “You can stay with us for as long as you want.” And who could resist the call to “Come out west”?

CD Track List
Now Residing Abroad is scheduled to be released on June 22, 2018 on Stonegarden Records.
Posted by Michael Doherty at 8:12 PM