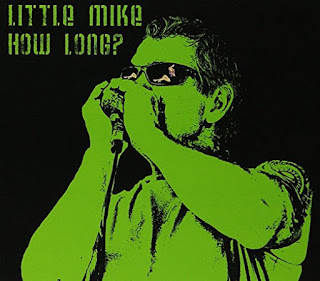 I’ve been listening to a lot of blues lately, partly as a way of coping with the awful state our country has so rapidly slid into. Shit, I thought we had largely moved past that angry racism and homophobia, thought we had made some progress, and yet Nazis proudly march in the streets, and with the support of the president no less. What went wrong? What went so horribly wrong? I don’t know exactly, but I do know that the blues can help ease the pain, make us feel less alone. Ah, if only the blues could kill Nazis. Has anyone tried it yet? Anyway, I’ve been enjoying Little Mike’s 2016 release, How Long? It features mostly original music, written by Michael Markowitz. Little Mike is a talented harmonica player, and that instrument figures prominently in most of these tracks. The band also includes Cam Robb on drums, Dave Sweet on drums, Troy Nahumko on guitar, John Edelmann on guitar, Joe Fontenot on bass, Ken Stearns on bass and guitar, and Mitch Margold on organ.

The album gets off to a great start with “Cotton Mouth,” an original instrumental composition, driven by Little Mike’s harmonica. This song feels like a party, and already has me in a better mood. Just listen to that harmonica! And he doesn’t really take a break, just keeps it going. That’s followed by “How Long,” the album’s title track, on which Little Mike plays piano. This song was written by J.B. Lenoir, and has a verse familiar to those folks who enjoy “I Know You Rider.” “I laid down last night, tried to get my rest/Now my mind started rambling like the wild geese in the west.” There is a kind of easygoing jam that is perfect. At the end, Little Mike sings, “Well, then I want my body on that Brooklyn line.” He then adds, “That’s Brooklyn, New York, baby,” clarifying it for anyone who might have confused it with Brooklyn, Indiana or Brooklyn, Michigan or Brooklyn, Iowa (yes, those are actual places).

“Smokin’” starts with harmonica, and quickly develops into a fast-paced little gem about the lethal aspect of cigarettes, and how hard it is to quit the habit. He has no doubt about it, as he sings, “Well, cigarettes killed my mama and my papa too/And I know someday, lord, they’re gonna get me too/Cigarettes gonna kill me/They’re gonna make me die.” Nothing subtle about that. I’d love it if everyone quit smoking cigarettes, as the smoke makes me ill, and I’m so bloody sick of seeing cigarette butts on the ground. If you need to smoke something, switch to pot, folks.  “Smokin’” is followed by “Moanin’,” a cool instrumental written by jazz pianist Bobby Timmons. Interestingly, Little Mike plays harmonica, not piano on this track, and the tune gets a delicious blues treatment. In addition to harmonica, there is some really nice work on guitar here. And I love that bass line.

“When My Baby Left” is a good, solid blues tune with plenty of wonderful work on harmonica. That’s followed by a cover of Johnny Young’s “Slam Hammer,” an instrumental tune with a ton of energy. This one is a whole hell of a lot of fun, and is over before you know it. “Sam’s Blues” is a slow, very cool blues instrumental, led by harmonica. “Not What Mama Planned” is another cool tune, opening with a simple but catchy bass line, and developing into a good blues tune with a nice jam. How Long? ends with a delicious, slow blues tune, “Sittin’ Here Baby,” mainly bass and vocals. It’s interesting, as it sounds like it’s almost difficult for Little Mike to be this quiet. The song feels restrained in a way, like it’s eager to burst open and swallow someone whole, and so even though it’s a mellow song, it kind of has me on edge. “Sitting here, baby, worrying all night long/Worrying as the nighttime, nighttime turns into dawn.”

CD Track List
How Long? was released on September 1, 2016 on ELROB Records.
Posted by Michael Doherty at 8:38 PM