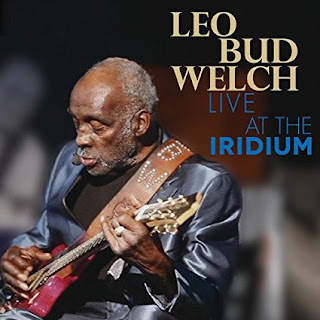 In these times of disasters and division, we don’t have a leader to pull us through. Instead, we have a president who is himself a national (though perhaps unnatural) disaster. So it is to music that we turn, and often to the blues. Blues guitarist and singer Leo Bud Welch is someone from whom we can take inspiration. Though he’s been playing guitar since his teens, he did not have a recording career until he was in his eighties. How is that for an example of never giving up! His debut album, Sabougla Voices, was released in early 2014, when Welch was eighty-one. His latest release, Live At The Iridium, is a two-disc set (a CD and DVD) recorded on March 7, 2016 (my birthday) at The Iridium in New York. Accompanied by only a drummer (Dixie Street) and by a backing vocalist (Vencie Varnado) on certain tracks, Leo Welch delivers a loose, intimate and honest performance of mostly covers. And though much of the material might have been written by others, Leo Bud Welch seems to have lived it, giving us the sense that this is the real thing.

Before launching into “Praise His Name,” Leo Welch says, “I don’t know what you come to do, I come to sing my songs.” “Praise His Name” is the lead-off track from Sabougla Voices, and is the only original track in the set. This track features Vencie Varnado on backing vocals. By the way, the DVD is a minute longer than the CD, and includes Vencie’s introduction, in which he says “We’re gonna bring you some gospel, some blues, more gospel, more blues” (a line that made me smile). That’s followed by a cover of Muddy Waters’ “Still A Fool,” which Leo introduces as “old school blues.” He doesn’t talk much between songs, however, and instead usually gives barely a pause. He gets rocking on “Got My Mojo Working.” On the DVD, watch him moving on his chair. It’s clear that even in his eighties, Leo Welch has his mojo working. For that tune, Vencie Varnado returns on backing vocals (and to dance around, totally grooving to the music).

Leo does offer a brief introduction to “Woke Up This Morning”: “When I woke up this morning, I don’t know about you, but my baby was gone. I ain’t had no love since my baby been gone.” Wait, so he hasn’t had any love since last night? That’s not so bad. Someone calls out during a pause in the song, surprising the drummer and making her laugh. I dig Leo’s rendition of Willie Dixon’s “My Babe.” This one is just fun. And then he totally owns “Sweet Little Angel.” Listen to the crowd respond to the way he delivers the first line, “Got a sweet little angel.” In this song, he sings, “I asked my baby, I asked her for a nickel/And she gave me a twenty dollar bill/When I asked her for a little, just a little drink of liquor, do you know what she did/She bought me a whiskey still.” Now that’s a good girlfriend! And I believe him when he sings that if she quits him, “I do believe, I believe I would die.”

For “Cadillac Baby,” Vencie Varnado returns on backing vocals and goofy dance moves, like he’s driving a giant Cadillac. That’s followed by “Po’ Boy,” one of my favorites. “I’m a poor boy/I’m a long way from home.” Oh yes. Interestingly, Vencie says to the crowd, “I’d like to ask Leo to pay a tribute to the legendary B.B. King.” Weird, because I get the sense this set list was planned pretty well. Anyway, he continues: “Leo and B.B. go back a long way, eh? Actually, B.B. had offered Leo an audition back in the fifties, but unfortunately B.B. couldn’t afford Leo’s room and board for one night in Memphis, so he didn’t pursue the opportunity.” He talks about B.B. King working as a radio DJ, and how Pepticon was one of the sponsors for his show. So he asks Leo to perform the jingle B.B. wrote for that sponsor. A strange tribute, eh? One of the oddest choices of covers. Dixie Street sits this one out at first, then adds a little hi-hat and hand percussion toward the end.

I’ve always dug “Good Morning, Little School Girl,” though the older the folks who sing it are, the more twisted it gets. However, when the singer is in his eighties, it becomes innocent and adorable, particularly as he sings, “Tell your mother and your father I am a little schoolboy too.” I love Leo’s take on this song. He turns to country for a good rendition of “Walkin’ The Floor Over You.” Leo Welch then stands up for his final number, “Me And My Lord,” with Vencie echoing Leo on backing vocals.

The DVD includes an interview with Leo Welch, in which he talks about his youth and his work cutting timber. He tells a great anecdote about playing his first guitar (which wasn’t really his). During the interview, he plays “Baby, Please Don’t Go,” and there is also some footage of him recording “Walkin’ The Floor Over You.” Leo talks about what the blues mean for him, and about never giving up. Also included in this feature in a bit of an interview with Vencie Varnado about his connection to Leo.