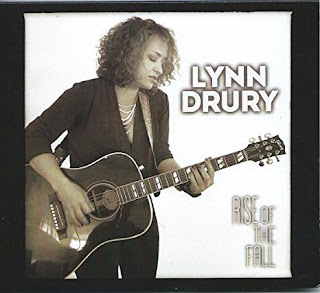 Lynn Drury is a singer and songwriter based in New Orleans. She mixes folk, country, blues, soul, rock and pop elements to create her own appealing and engaging sound, largely focusing on original material. And she is a damn good songwriter, her songs speaking to us honestly and directly. (That line from “City Life” jumps to mind: “I guess I’d rather be messed up than pretty.” And this line from “That’s What You Mean”: “I only wanted to suffocate under the weight of a love that’s real.”) Her new album, Rise Of The Fall, features all original songs, written or co-written by Drury. Rise Of The Fall is, by my count, her eighth full-length release, and features Rene Coman on bass, Chris Adkins on guitar, Chris Pylant on drums and backing vocals, Derek Huston on saxophone, Jack Craft on cello, Sam Craft on violin, Jake Gold on organ, Trevor Brooks on piano and organ, as well as other guests on certain tracks.

The album opens with “Lifetime Of Living,” a kind of beautiful and moving number, with a good amount of experience apparent in Lynn’s vocals, which works to give weight to the advice she offers. Really, her voice and the strings are what make this song something special. “There’s a lifetime of living/Don’t you forget it/Don’t you regret it/Don’t jump ahead of it.” And there is something about this song that is making me feel good. What more could I ask for from a song? “Trust in what you know.” Trevor Brooks plays organ on this track.

That’s followed by “Anniversary,” which has a strong country feel and full-band sound. “There was something he’s supposed to remember, but he forgot/It’s just his anniversary, his anniversary.” Then in “11:11,” Lynn sings “It’s 11:11 and I, I love you.” It’s a thoughtful, somewhat moody night song, and that line sets the tone so well. So simple and yet it says quite a lot, doesn’t it? “It’s 11:11, and I, I love you.” And by the end, the song has built in power. This one was written by Lynn Drury and Judson Smith.

One of my favorites is “Water Your Words.” It’s a beautiful song, slow and moving, yet oddly catchy, and with an excellent vocal performance. “We’ve always been good/At riding that fence/Between black and white/So don’t make me choose/Between this life and you.” Arsène DeLay provides backing vocals on this track. This song dug into my brain, made itself a home there, where it is certainly welcome. I love this one more each time I listen to it. It’s followed by another of the album’s highlights, “What Good Is The Rain,” which has an adorable and quirky sweetness. These are the opening lines: “I want to wrap my hands around/Something that don’t get me down/And it don’t come with regret.” And check out these lines: “I’m sorry, I just thought/You wouldn’t want my heart/It’s weary and worn/Slammed shut from weathering too many storms/So what good is the rain/If it don’t wash away the pain.” Wonderful, right?

“Rise Of The Fall,” the CD’s title track, is another seriously strong song, with some beautiful work on strings. “Freedom Tree” is a slow, bluesy kind of haunting number. “I would never outgrow your touch/I would keep you through the winter of my love/My love.” Alex McMurray plays lead guitar on this track. “Taking All The Good People” is another favorite, this one written by Lynn Drury and Judson Smith. “Sometimes you don’t see the pain/When you’re walking down the street/And he’s hammering away on a dream that ain’t his/’Cause his skin ain’t the color of liberty/We have to stand up and say/We don’t believe in what they’re doing/Taking all the good people away.”

CD Track List
Rise Of The Fall is scheduled to be released on September 29, 2017.
Posted by Michael Doherty at 8:35 PM