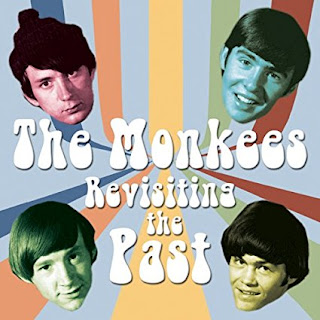 The Monkees were my first favorite group. I started listening to them when I was four, and never really stopped. In fact, I think I appreciate their music now more than ever. Anyway, I try to get my hands on as many Monkees releases as possible, and recently purchased Revisiting The Past, a CD of interviews. My copy, put out by MVD Audio, contains no information on when or where the interviews were conducted. There are no liner notes, or even a track list. On the back of the case it says, “Micky Dolenz, Michael Nesmith, Peter Tork, and Davy Jones, better known as The Monkees, are among the most iconic American rock bands and TV entertainers of all time.” That might lead one to believe that all four Monkees are interviewed on this disc. But that is not the case. The first four tracks are with Micky; the rest are with Peter. Mike and Davy are not included on this release.

On the first track, Micky talks about studio work, and how he misses it. “It’s nice, ‘cause it’s performing, but it’s private.” He also talks about relying on other people to point him in the right direction in regards of song choices. “My wife picks all my material for me,” he jokes. It seems this interview is from 1987, because he mentions “Love You Forever” and “Getting’ In,” two songs from Pool It!

The second track must be from the same interview, as he talks about the differences between the (then) current tour and the tour of the previous year. “It was a different tour last year. It was with, you know, those other acts.” The other acts he refers to are Herman’s Hermits, The Grass Roots and Gary Puckett & The Union Gap, which toured with The Monkees in 1986. He mentions that the current tour is more theatrical. “The Monkees isn’t a group. It’s not a band in any sense of the – in really the classic sense of the word. The Monkees is an act, like, you know, singing Marx Brothers or something.” He also talks about a live recording from 1967, and about how he doesn’t like watching live concerts on tape. On the third track, he talks about how Mike was too busy to tour, and about negotiations for a Monkees feature film. “It’d be something we’d film this winter and for release next summer.” Geez, whatever happened with that? I’d never heard of it.

On the fourth track, we hear the interviewer, who asks about specific songs, first “Daily Nightly.” Micky responds: “Yeah, that’s a great tune. I love that tune.” He adds, “If I’m not mistaken, that’s the first song that we used the Moog synthesizer on. And, to my knowledge, it was one of the first times the Moog synthesizer had been used in rock and roll.” The interviewer also asks about “Porpoise Song.” In his answer, Micky mentions “As We Go Along,” which is my favorite Monkees song. Apparently the interviewer loves that song too, for he says, “I’ve never seen you do that live,” and seems disappointed when Micky says that they have performed it but aren’t doing it now.

The fifth track is an interview with Peter Tork, who talks about the first song he learned to play on guitar, and about getting his first banjo in his teens. “The rest is, as we say… well, for some people it would be history; for us it’s total obscurity.” And yes, the interview is from 1987, for on the sixth track, Peter mentions “the new record, Pool It.” He also talks about the flip side to the “Heart And Soul” single, a song called “MGBGT,” which Peter would later include on his Stranger Things Have Happened album. He talks about how songs were submitted to the group, and about which instruments he plays on the album.

On the seventh track, Peter Tork talks about the Monterey Pop Festival. I noticed that on Amazon, this track is labeled as “Monkees At Woodstock.” But as far as I know, no members of The Monkees attended Woodstock. And neither did some of the artists Peter mentions here – Moby Grape (“They were wonderful that day”), Otis Redding, Booker T. And The MGs, and Buffalo Springfield. “I particularly remember the Grateful Dead, because I was backstage and I caught them on the monitor, and there was something about them that was just magical.” Peter also talks about the live 1967 album, and what he would have done differently if he’d been in charge of the release. He mentions his love for Jimi Hendrix’s rendition of “All Along The Watchtower.” “I see colors when I hear that. I mean, I see the pall of a ruined city, the smoke of a ruined city hanging over the battlements.” This disc concludes with Peter talking about a few of The Monkees’ songs.

Revisiting The Past was released on October 7, 2016. It is approximately nineteen minutes long.
Posted by Michael Doherty at 1:09 PM