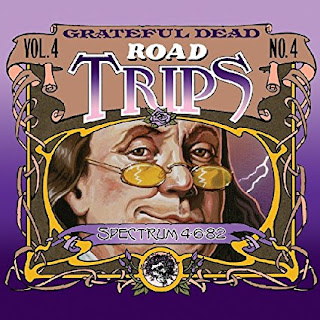 Real Gone Music is re-issuing the Grateful Dead’s Road Trips series of live recordings, starting at the end and working their way backward. They began with Vol. 4 No. 5: Boston Music Hall 6-9-76, which came out in June. The second re-issue in the series is Road Trips Vol. 4 No. 4: Spectrum 4-6-82. While most Grateful Dead live releases focus on the seventies (and with good reason), the band put on some excellent shows throughout the entire thirty-year career, and it’s great to have some early eighties recordings. Road Trips Vol 4 No. 4 contains the complete concert the Dead performed on April 6, 1982 at the Spectrum in Philadelphia (along with some songs from the previous night at the same venue).

The first disc contains the entire first set. “Cold Rain And Snow” is always a good opener, and Jerry Garcia’s voice sounds really good here. The energy builds well toward the end. Bob Weir then keeps things going with a cover of Chuck Berry’s “Promised Land,” with Brent Mydland delivering some nice stuff on keys. At this point, Brent had been with the band for a few years, though still, from what I understand, felt like the new guy. This version gets a bit messy, but is still pretty good. For me, things start getting exceptional with “Candyman.” This is a beautiful and interesting rendition, with Jerry on top of things musically, vocally, emotionally. And Bob matches him vocally on “C.C. Rider,” which follows. This is a seriously good rendition, in large part because of Bob’s vocal performance. And Jerry’s guitar sounds wonderful. Plus, they let the groove stretch out a bit. This is not a song I usually consider all that much, but this version is making me take another, closer look. This is certainly one of the best versions I’ve heard the band do.

They follow that with a damn good “Brown-Eyed Women.” Just listen to Jerry sing the “Daddy made whiskey and he made it well” verse. Excellent! Hell, even the pair of “Mama Tried” into “Mexicali Blues” has a certain flair. The band is on. “Big Railroad Blues” seems the natural choice to follow those two songs, flowing well thematically, and this is a good, rockin’ version. Bob then slows things down for a pretty and passionate rendition of “Looks Like Rain,” with some unusual stuff toward the end, making this a version worth paying attention to. That’s followed by an energetic “Jack-A-Roe.” The first set is rounded out with two more rockin’ numbers, “It’s All Over Now” and “Might As Well.”

The second disc contains more than half of the second set, as well as a portion of the first set from the April 5th show. Yeah, it’s set up weirdly. I understand and appreciate that they don’t want to break up that post-“Space” section, and I’m happy to have this music from the night before, but I would have put it on a fourth disc rather than sticking it in the middle of the second set. Because basically you need to take this disc out after “Space” and put the third disc in, and then return to the rest of this disc later. Anyway, the second set opens with “Shakedown Street,” which features a good, groovy jam. I dig that vocal jam, and especially that interplay between Jerry and Brent, a bit of call and response. That ends up being one of the highlights of the show. The band follows that with an okay “Lost Sailor” straight into a pretty good version of “Saint Of Circumstance.” “Terrapin Station” is really good, but oddly mellow, right? And for just a moment do they dip into “In The Hall Of The Mountain King”? Wild. “Terrapin” slides into the “Drums/Space” segment. “Drums” is quite good, becoming a beast at times, exploring interesting peaks and valleys, and sometimes becoming almost hypnotic. As “Drums” becomes “Space,” the drummers remain on stage for a short time, which is cool. This is kind of an intriguing “Space,” certainly one of the better ones I’ve heard.

And that’s where the second disc should end. But we’re treated to a few tunes from the first set of the previous night. Though the music is good, it is jarring to be ripped out of the middle of one show and deposited into another. The more I think about it, the more I realize it’s a terrible idea to include this music. It would have been better to just not include it at all rather than break up the flow of the second set. That being said, the three songs are “Deep Elem Blues,” from the middle of the first set, and “Althea” and “Man Smart, Woman Smarter,” which concluded the first set that night. “Deep Elem Blues” is a lot of fun, a jaunty rendition. This is a nice, relaxed “Althea.” And “Man Smart, Woman Smarter” is designed to get us all dancing.

The third disc then takes us back to the second set of April 6th, as “Truckin’” emerges from “Space,” with Bob Weir blowing that whistle. A moment of forgotten lyrics, and then a bizarrely changed lyric – the line “Living on reds, vitamin C and cocaine” switched to “Ever since she went and had her sex change.” Very strange. This is a fairly short “Truckin’,” without any jam to speak of, leading straight into an even shorter “The Other One.” It’s wild, but includes just one verse – the second one. And just as suddenly we’re into “Morning Dew.” This is an excellent version of “Morning Dew,” with Jerry’s voice sounding wonderful. It’s an incredibly moving rendition, getting delicate toward the end before building in power at its conclusion. This is definitely another of the show’s highlights. The second set then ends with “Sugar Magnolia.” The encore is a sweet and beautiful “It’s All Over Now, Baby Blue,” concluding the show with another highlight.

The third disc then includes the first half of the second set from the night before, beginning with “Bertha,” which has something of an abrupt ending. That’s followed by a fantastic “Playing In The Band,” with a jam that gets into some interesting territory. It eases into a nice “Ship Of Fools,” and then into a “Playing In The Band” jam. Great stuff. I wish this release had a fourth disc with the complete second set, particularly as the band goes back into “Playing” again after “The Wheel,” so the segment contained on this disc feels incomplete.