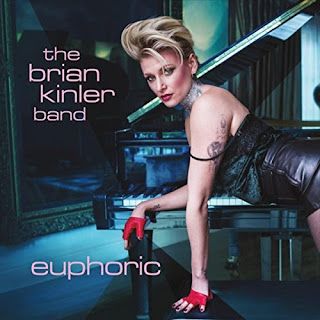 I am always happy when there is a new CD release from the The Brian Kinler Band, and Euphoric in some ways is a return to pianist Brian Kinler’s early work, without a vocalist. However, he’s maintained the more pop and dance-oriented style he developed on his previous release, 2015’s The Race Against Time, which featured vocalist Francesca Capasso on most tracks. Take the new CD’s first track, “I Know, Madame,” for example. It features that beautiful, light, thoughtful playing of some of his earliest material, but with a dance beat backing it, creating a fun atmosphere. And yeah, you can certainly move to the tune. It’s like Brian Kinler has taken all he’s done before, and built upon it. As with Brian Kinler’s 2013 release, Not Your Everyday Amateur, the only member of the band to appear on these tracks is violinist Andrea Whitney (nee Gaspar). The rest of the sounds were created on Brian Kinler’s keyboard, with some help from Andre Mayeux on several tracks. All songs on this disc are originals, written by Brian Kinler.

“I Know, Madame” is followed by one of my personal favorites of this new album, “Norway,” a beautiful and uplifting composition. This is one of the tracks to feature Andrea Whitney on violin, and her work here is moving and feels integral to the piece rather than a solo over it. If you’re like me and are constantly looking for music to raise your spirits and take you away from our current reality, give this track a listen. Andre Mayeux is responsible for programming the drums and bass on this track. By the way, a week ago, Brian Kinler released a video for this song, which you can view on You Tube.

“Night Goes Away” has some 1980s pop and dance influences, which might come as no surprise to those who’ve been listening to Brian Kinler all along. However, that one break toward the end of the track did actually surprise me, that shift that made me want to create a dance floor here in my apartment. Brian Kinler’s music often tells a vivid story without any lyrics, and “Nearly Like Us” certainly pulls you in and takes you on a journey. And I love that moment when it opens up into a brighter place, a place where I’m guessing we all want to be. Andre did the drums and bass on this track.

Another of my favorites is “The Red Wedding.” And no, I didn’t know the reference at first, having never seen Game Of Thrones (though several people have recommended it to me). Someone told me to do an online search for “red wedding,” and so I did. I’m not sure seeing that scene has given me any more appreciation for this song. I loved this track before viewing that sequence from Game Of Thrones. This is another of the songs to feature Andrea Whitney on violin. It is pretty and delicate at moments, powerful at others, then totally fun at still other moments. Brian has the ability to take you in whatever direction he desires and make it work. By the end of this track, it’s made me deliriously happy, something I wouldn’t have guessed at its beginning. Andre is responsible for the drums, bass and horns.

Brian Kinler then turns more thoughtful and introspective again with “I Can’t Remember Your Face.” Actually, this song feels like it is simultaneously turning inward and reaching out, and it features more beautiful work by Andrea Whitney on violin.  Then “Wanna Get You Alone” begins with a good groove and quickly moves in a dance direction. But, as I mentioned before, Brian can switch gears on you before you’ve even noticed, and there are quieter moments within this song before he returns to that groove.

“Once Is Not Enough” is another of my favorites. When it begins, it has a gentle, pretty touch, and then develops into a gorgeous romantic piece. Andre Mayeux wrote and performed the string part for this one. It’s a beautiful song, and ends gently. And then, bam, the next song, “Catnip,” begins with a good thumping rhythm and some joyful work on piano. This is yet another of the disc’s highlights. A drum solo? A bass solo? Yes, sort of. It’s all done on Brian’s keyboard, the drums and bass by Andre. I particularly love Brian’s playing at the end of this track. The CD then concludes with “Joy,” which has a 1980s vibe at the start, and becomes a rather beautiful and positive song.

CD Track List
Euphoric was released on May 22, 2017. And for those folks in Los Angeles (or for anyone who can get to Los Angeles), the original line-up of the band is getting back together for a gig at Vitello’s on July 23rd. See you there!
Posted by Michael Doherty at 2:42 PM