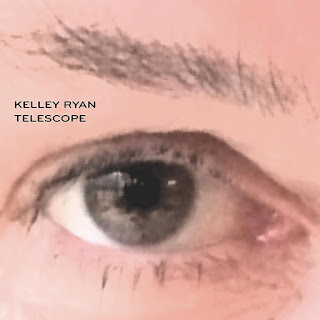 Kelley Ryan has released several CDs over the past two decades, both under her name and the name astroPuppees. Her new album, Telescope, contains original material, written or co-written by Kelley Ryan (including one song co-written by Marshall Crenshaw). The music is pop, but an unusual brand of pop, featuring a wonderful combination of folk and even some jazz elements, interesting lyrics and Kelley’s distinct voice. Joining her on this CD are Don Dixon on bass, Jim Brock on drums and percussion, Jon Thornton on horns and Marti Jones on vocals.

The album opens with “The Darkest Stars,” also known as “For Sylvia Plath And Anais Nin With Regards To Marilyn,” which has something of a haunting folk sound at the start, but also a sexy, bluesy horn. “Underneath the sheets tonight, oh boy/Several people dancing in my bed/I am indiscreet tonight, oh boy/I’d be better off if I was dead/It’s all for me, it’s all for me/It’s all for me, it’s all for me/The good die young.” (Of course, Anais Nin wasn’t young when she died.) This is a cool song, but I’m even more fond of the following track, “Cigarette.” This one also starts with a sort of folk vibe, but with a pop beat. And it is an absolutely delightful song. The first time I listened to this album I wanted to cheer, just out of sheer joy, when she sings, “Ah-ooh.” Might sound silly, but just wait until you hear it. “I pick you up and I put you down/But I haven’t lost you yet/Gotta, gotta quit ah-ooh.” This is an adorable song, with some sweet touches on horn. “Oh la la la/Oh la la la/Oh la la la.”

“Save Me” is a song that Kelley Ryan wrote with Kimm Rogers, and this one has a sweet, friendly vibe. Check out these lines: “If heaven is a lie with no one to defy/I got a roaring need to feel my love exploding here and now/Save me/Come save my life/Save me.” That’s followed by a song that Kelley Ryan wrote with Marti Jones Dixon, “Flake White Heart” (apparently also titled “Sacred Monster”), which features some beautiful blending of vocals. “Feel the fire, feel the fire, feel the fire/Let it go and break my flake white heart.”

There is something strangely pretty about “The Broken News,” especially in the way Kelley Ryan sings, “You, you, I’m nothing without you.” This one has a way of slowly but certainly making a home for itself in my head. “You are my dusk and dawn/A dish, a cup, a tender bruise/I love you so/You, you, I’m nothing without you/I’m nothing without you now.” Then “Pulling For Romeo” is the song that gives the album its title in its opening lines, “You’re at the end of your rope/Don’t need a telescope/I saw it, yeah, I saw it.” No matter how many productions I see of Romeo And Juliet, each time I think, well, maybe there’s a chance Romeo will get news of the Friar’s plan and it will all work out. It never does, of course, but we can live in hope, can’t we? And that’s in part what this song is about, pulling for the guy you know has no chance, pulling for love to work out (assuming you believe that what Romeo and Juliet feel for each other is love). It’s a good song, reminding me just a bit of Aimee Mann.

The “Passing Through” on this album is not the song that folks like Leonard Cohen and Pete Seeger used to play. This “Passing Through” was written by Marshall Crenshaw and Kelley Ryan, and Marshall Crenshaw actually recorded his version several years ago, including it on his Jaggedland album. On this song Kelley Ryan reminds me a bit of Amy Rigby, in the style of her vocal approach to certain lines. Here is a taste of the lyrics: “We traced our steps from the past/Shadows in the curtains on the second floor/I used to have a key to that front door/We didn’t know it then/But you and I were passing through/Passing by/Let’s hurry on.”