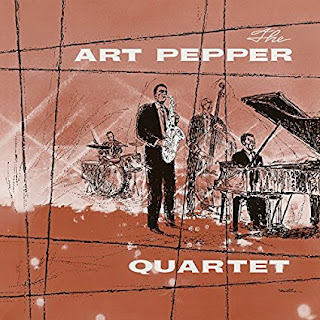 It was at the beginning of 2015, with the release of the three volumes of Neon Art, that I became a serious fan of Art Pepper’s playing, his energy, his style, his passion, his drive. Those CDs feature fantastic live recordings from near the end of the saxophonist’s life. Later that year, we were treated to Live At Fat Tuesday’s, also recorded in the year before he died. The new Art Pepper release, an expanded edition of The Art Pepper Quartet, contains music from much closer to the beginning of his career. And while it has a different feel, a different style from those much later recordings, the talent and the joy are remarkable. The first time I listened to this disc was at the end of a completely screwed up day, and the moment the music began, I felt the weight of the day lifted. It is a true pleasure to listen to this album. Most of the music was composed by Art Pepper, but there are also a couple of covers. The quartet is composed of Art Pepper on alto saxophone, Russ Freeman on piano, Ben Tucker on bass and Gary Frommer on drums. The new expanded edition contains five bonus tracks, alternate takes. It also includes new liner notes by Laurie Pepper, as well as the album’s original liner notes.

The CD opens with “Art’s Opus,” a delicious and somewhat relaxed tune. One of the noticeable differences between this recording and those recordings of the Neon Art series is the length of the tunes, the amount of jamming. Those discs had only two or three tracks apiece, with nice long numbers. The tunes on this album are much shorter, and somewhat breezy. At nearly six minutes, “Art’s Opus” is actually the longest track on the disc. It has a bright, positive feel, and Art Pepper seems to be thoroughly enjoying himself, just letting the music flow. There is some nice back-and-forth between Art Pepper and Russ Freeman, and even a brief drum solo by Gary Frommer. That’s followed by “I Surrender Dear,” one of my favorites. I’m not sure exactly what it is about this tune, but there is something undeniably delightful about it. I love Art Pepper’s work here, but perhaps my favorite section is Russ Freeman’s lead over that cool bass line by Ben Tucker. And then Gary Frommer gets a chance to add some fun bursts on drums. Life just seems better while this music is playing. “I Surrender Dear” was written by Harry Barris and Gordon Clifford. The album’s other cover is “Bésame Mucho,” written by Consuelo Velazquez and Sunny Skylar. I have no idea how many versions of this song I’ve heard over the years, but this rendition is certainly one worth paying attention to. It has that romantic feel, as you’d expect, but is also playfully sexual at moments, like it’s teasing and eager but not quite able to follow through. It’s the dance that you hope leads to something else.

“Diane” is a gorgeous, romantic tune. The playing here is gentle and loving, and it makes me want to hold that special someone and never let her go. Play this one for the love in your life, and he or she should fall into your embrace and never want to leave (or at least won’t want to during the short three and a half minutes of this tune’s duration). That’s followed by another of my favorites, “Pepper Pot,” its playful title perfectly fitting its approach and appeal. I think you’d have to work hard to keep from smiling throughout this one. You’d have to be one of the world’s confirmed and professional grouches to not want to bounce along with its rhythm. The bonus tracks include an alternate version of “Pepper Pot,” which is also really good, though significantly shorter, due to a sudden stop.

Art Pepper dips into some wonderful blues with “Blues At Twilight,” another of this disc’s highlights, with Art Pepper’s saxophone speaking and breathing the blues, sounding so natural and so right. Ben Tucker provides a great lead on bass, with Russ Freeman adding some delicious comments on piano. Sometimes the blues can make you feel pretty damn good. The bonus tracks include an alternate take of “Blues At Twilight.” I think I prefer the originally released version, but I’m enjoying them both. The original album then concludes with “Val’s Pal,” a swift-paced and incredibly short number that Gary Frommer kicks off on drums, coming in fast and strong. And Ben Tucker’s work on bass is impressive. But of course it’s Art Pepper’s saxophone that leads this speedy gem. The bonus tracks include several takes of “Val’s Pals,” including false starts and incomplete attempts. They’re presented in order, so you can get a sense of the progress of the recording and of the tune.

CD Track List
This expanded edition of The Art Pepper Quartet is scheduled to be released on May 12, 2017 through Omnivore Recordings.
Posted by Michael Doherty at 1:12 AM