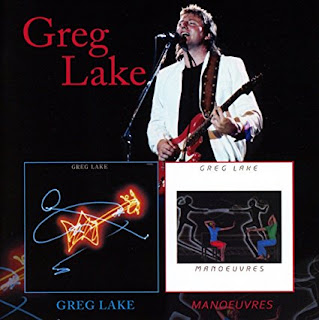 Almost everyone can agree that 2016 was a complete disaster of a year. In addition to the horrors of the presidential election, we lost a remarkable number of excellent and influential musicians last year, including both Keith Emerson and Greg Lake of Emerson, Lake & Palmer. Greg Lake died from cancer in December of 2016. But earlier in the year, we were treated to a special two-disc re-issue of his two solo albums, 1981’s Greg Lake and 1983’s Manoeuvres, with some bonus tracks. Joining Greg Lake on both albums are Gary Moore on guitar, Tommy Eyre on keys, Tristram Margetts on bass and Ted McKenna on drums (though several other musicians also appear on the first album). This two-disc set contains extensive liner notes by music journalist Malcolm Dome, featuring some candid thoughts by Greg Lake on these albums and on specific songs, including the bonus tracks.

The first disc contains Greg Lake’s self-titled debut solo album, along with three bonus tracks. The album opens with “Nuclear Attack,” which comes on a bit harder than what you might be used to from ELP, with a hard rock guitar kicking off the tune, and there’s a reason for that. The song was written by Gary Moore, who was Thin Lizzy’s guitarist. It’s about the unlikelihood of surviving a nuclear war. The album came out as the U.S. was entering the Reagan years, a horrible time politically. But hey, guess what, we’re once again in a seriously precarious situation, with the most unstable president in the history of the country, a man who could start a nuclear war over something said on Twitter. “Out on the streets, they’re all living in fear/You can feel their hearts pound as the moment draws near/One push of the button is all it would take/To dress the world in black/One fault in the system, a fatal mistake/And you’ll never come back from a nuclear attack.” Yup, this song is still timely, still relevant. Donald Trump is the fault in the system; I just hope he doesn’t prove to be our fatal mistake. Oh, what happened to that progress we’d been making? “Nuclear Attack” was also released as a single. Gary Moore would record his own version, including it on his Dirty Fingers album. That song is followed by “Love You Too Much,” which was also released as a single (and was also the flip side to the “Nuclear Attack” single, as well as the flip side to the German single for “For Those Who Dare”). This one is a lot more fun. It’s a good rock tune, even including a reference to “Blue Suede Shoes” (“Well, you can take me, honey, and steal my money/You can step on my blue suede shoes/’Cause I love you too much”). And there is plenty of great work on guitar. This is one of the album’s best tracks, and it was co-written by Bob Dylan. It was written by Bob Dylan, Helena Springs and Greg Lake (Greg Lake talks about it in the liner notes).

Another highlight for me is “Black And Blue.” It begins with a sweet, kind of dreamy sound. “Oh, darling, don’t stop loving me/No, I never meant to fill your dreams with heartaches/Or to send your true love crashing to the floor.” And then when the song kicks in, it has kind of a catchy pop vibe. This one was written by Greg Lake, and is one I enjoy more each time I listen to it. “’Cause no one else ever touched me the way you do/So darling, don’t you leave me, I’ll never get over you.” There is something about “Long Goodbye” that I really like. It’s a good, energetic, pulsing rock song with some decent lyrics, with lines like “You know I’ve driven all night/But the landscape screams your name” and “I know your smile’s so warm, but you’re causing grief/’Cause you’ve taken my tongue in your flashing teeth/And you’ve ruined my soul, because your love’s still out of reach.” “Long Goodbye” was written by Greg Lake, Tony Benyon and Tommy Eyre.

I am also really fond of “Someone,” which was also written by Greg Lake, Tony Benyon and Tommy Eyre. It has a quirky, strange yet delightful vibe, with a certain power. “Feeling your hunger/Ringing your number/Listening to your voice/I'm drunk and I'm calling/Tripping and falling/Wishing I had a choice.” And I love that work on keys. This might actually be the album’s best track. That’s followed by “Let Me Love You Once,” which was written by Stephen Dorff and Molly Leiken, and was released as a single. This song was recorded by Barbara Fairchild in 1976, and by Dusty Springfield, who released it as a single in 1977. The first verse of Greg Lake’s rendition is different from that of those other two versions. Yes, this song is a bit cheesier than the other tracks on this album, but it’s still a good song.

The three bonus tracks feature a different band playing with Greg Lake. And that band is Toto. Interestingly, the first song, Smokey Robinson’s “You Really Got A Hold On Me,” is one that Dusty Springfield also covered (her version appearing on 1979’s Living Without Your Love). But, according to Greg Lake in the liner notes, it was The Beatles’ rendition that inspired his version, and there are a couple of moments on this recording where he sounds very much like John Lennon. The other two bonus tracks are also covers: “You’re Good With Your Love,” which was written by Eddie Schwartz, and “Cold Side Of A Woman,” which was written by Kerry Chater and Roger Karshner. Tom Scott plays saxophone on “You’re Good With Your Love.”

The second disc contains Greg Lake’s second solo album, Manoeuvres, as well as one bonus track. While Manoeuvres is not quite as good as Greg Lake, there are still some excellent songs here, making it worth listening to. Interestingly, it is the second half of the album that really stands out. The album opens with its title track, a fairly solid rock song with a good vocal performance by Greg Lake. “I’m skating over thin ice tonight/I never thought it could be this cold/What you’re giving me in Fahrenheit/You’re taking back in solid gold.” It was written by Greg Lake and Gary Moore. It’s followed by a more rockin’ number, “Too Young To Love,” about being attracted to a girl who is, as he says, too young. “If making love’s a crime/I’m gonna end up doing time/There ain’t no way that you can be mine/You’re too young.”

“A Woman Like You” was written by Gary Moore, but unlike Moore’s contribution on the first album, this is actually a kind of mellow love tune, with a hint of blues. “Baby, you are everything to me/The only one I’ll ever need/Because I love you.” It’s followed by a harder rocking song, “I Don’t Wanna Lose Your Love Tonight,” which was co-written by Lake and Moore.

“Famous Last Words” was released as a single, the only single from the album, and the only cover. It was written by Chris Bradford, Andy Scott and David Most. It’s not a bad song, but it’s kind of cheesy and is certainly not my favorite track. The following track, “Slave To Love,” is a more interesting song, particularly with that guitar work. Plus, I really like the lyrics to this one. “You may have a dream or second sight/Yesterday’s hero or a star overnight/Walking on the water, there’s no land in sight/You’re just a slave to love tonight.” This is one of my favorite tracks, and it’s followed by “Haunted,” which may be my very favorite track. It features, for me, Greg Lake’s strongest vocal performance of the album. It’s a captivating song. “Lonely and empty/I'm searching for laughter/For memories brought alive/Places and faces and traces of you.”

On the original vinyl release, “It’s You, You Gotta Believe” was placed as the first track on the second side. And on earlier CD releases, it was put in the same position (as the sixth track). But on this CD release, for some reason it is placed as the last track. Wherever it is placed, it is another of the album’s highlights. Check out these lines: “You look for a friend/There ain't one in the end you can turn to/Somehow you learn to/Fight like a storm from the day that you're born/You duck and you dive/But it's all for nothing/Nothing's for nothing/Must realize it is just a disguise/That they wear/Nobody cares.”

The bonus track is “Hold Me,” and while the bonus tracks on Greg Lake were all written by other people, this one was written by Lake. It is a love song that is a bit on the cheesy side. “Oh, help me/Because I need your love so badly/You know I love you madly/I’m so in love with you.”