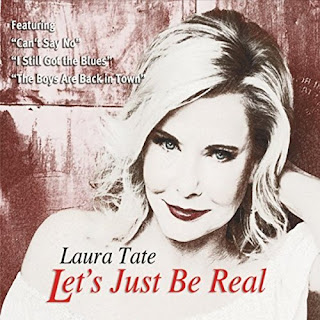 Laura Tate has an interesting career. As an actor, she’s had roles in television programs like 1st & Ten, Thirtysomething and Sisters. She has also directed music videos and commercials. She’s also involved in several humanitarian causes, her work resulting in her receiving the President’s Volunteer Service Award twice – in 2008 and 2009. And when she’s not been busy with all of that work, she’s managed as a vocalist to put out four full-length CDs, tackling standards on her first release. Her new release, Let’s Just Be Real, is a fun, playful bluesy album with rock and jazz elements. As with her previous release, I Must Be Dreaming, the vocalist is joined by several members of Teresa James & The Rhythm Tramps, including Terry Wilson on bass, Teresa James on vocals, Billy Watts on guitar, Lee Thornberg on horns and Tony Braunagel on drums. She is also joined by Jeff Paris on piano, organ and mandolin; Paulie Cerra on saxophone; and Leslie Smith on percussion. While Laura Tate didn’t write any of this album’s material, a few of the tracks were written by some of these musicians.

Laura Tate opens this album with a cover of Stephen Bruton’s “Nobody Gets Hurt” (a song from his Nothing But The Truth CD). As you might guess, the instrumental intro in her version is not as long as that of the original, and she throws in a little vocal play. It’s a good rendition, and it’s followed by a song written by Terry Wilson and Jeff Paris, “If That Ain’t Love,” which has something of a joyful 1960s feel. Part of it is the horns, of course. But it is also the groove and the backing vocals, as well as Laura Tate’s vocal approach. “I don’t want to lose you, baby/You know that I really don’t/You know, I work just as hard as I can/When it’s something that I really want.” This is a fun, sweet, bright song, one of my favorites. “If that ain’t love, baby, it’s a damn good start.”

Allen Toussaint wrote a lot of excellent songs, some of them under the pseudonym Naomi Neville. One credited to that name is “Hittin’ On Nothing,” originally recorded by Irma Thomas, and also done by Southern Culture On The Skids. On this album, Laura Tate delivers a really delicious, fun rendition (here written as “Hitting On Nothing”). It’s a song in which the woman basically says she’s not going to put out unless the guy buys her something – diamonds, a mink coat, something. “You know you promised me a mink coat for my birthday/And I ain’t seen mink, rat or rabbit to make me want to stay.” I love the sax and the piano on this track. That’s followed by another of the CD’s highlights, “Can’t Say No,” written by David Raven, Terry Wilson and William Watts. This too has something of a playful vibe, the way Laura Tate delivers lines like, “Who else could it be?/You must be way down on your list/I know I shouldn’t let you use me like this/But I’m crazy about you, you old freak/You only call me because you know I’m weak.” This is a delightful jazzy number with a bit of a Latin feel.

Probably the biggest surprise of this CD is the cover of “The Boys Are Back In Town” (here titled “Boys Are Back In Town”). Laura Tate’s version is quite a bit different from the original Thin Lizzy recording. It’s a strange rendition that begins as a slow, nostalgic number, then kicks in to become something of an upbeat tune, with almost a lounge jazz style. I’ve never heard it done like this before. Actually, this isn’t a song that I often hear covered at all. And certainly it takes on a different meaning when sung from a woman’s perspective. And then “Still Got The Blues” has a kind of sexy sound at the start. Oh yes, I love the horns. This is another of the disc’s highlights, written by Mel Harker and Douglas MacLeod. You can rely on the blues, baby. “You know I’m going to be just fine/If all my dreams fall through/Because after everything is gone again/I still got the blues.” And I like these lines: “Ain’t nothing worse than feeling down/But it’s better than feeling nothing at all/You can scratch your way to the top, baby/But you’ve got that much farther to fall.” This song also features some nice work on guitar. Mel Harker also co-wrote the CD’s title track, “Let’s Just Be Real,” this one with Jill Block. It begins with Laura’s voice accompanied by just piano, and she sings that “Romeo and Juliet were just victims of bad timing.” Well, there was a bit more to it than that, but sure. When the song kicks in, it has something of a classic vibe, which I love. And then the song builds in power at certain points. “Once upon a time don’t mean nothing to me.”

The horns play a prominent role in “I Need A Man,” a fun, playful and sexy tune written by Rick Deitrick. “I’m a gal on a quest/You folks ought to know/No time to rest/Got miles to go/I need satisfaction/I need it the most/I searched high and low/Deep and wide/And coast to coast/I need a man.” Now that is one randy chick. Well, I don’t think it ought to be all that difficult for her to fill her need. “He don’t have to be rich/If he can scratch my itch/I need a man.” That song is followed by a lively number, “Big Top Hat,” written by Stephen Bruton. “Well, you can kiss my ass ‘til my hat pops off, baby.” Ah yes, I am enjoying that piano. The CD then concludes with “Wildest Dreams,” with more of a country pop vibe, written by Jodi Siegel.