The Brian Kinler Band: “Not Your Everyday Amateur” (2013) CD Review 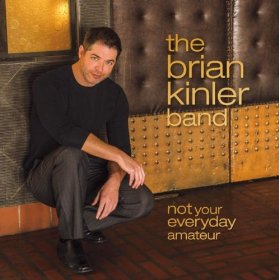 Not Your Everyday Amateur, the new CD by The Brian Kinler Band, is an excellent collection of songs showcasing Brian Kinler’s talent on keys. This one is quite a bit different from Brian’s previous release, Stories From The Quarter (2010). In some ways this CD feels more like a return to the style of his first CD, Two. But here he is also broadening his scope, reaching into some new territory. Brian is an amazing jazz pianist, as he’s proved on his earlier releases and in concert. On this album he shows also what he can do on keyboards – performing not just piano parts, but several other instruments. And though this is listed as a Brian Kinler Band CD, the only other band member to appear on this release is Andrea Whitney (nee Gaspar), who adds a gorgeous violin to several of the tracks. The rest is performed by Brian Kinler.

If you’ve seen The Brian Kinler Band in concert in the past year, some of this material will be familiar to you. Songs such as “Mama’s Gumbo Pot” and “The Fall” have been performed live several times. Some of the other material will likely be surprising, particularly “The Bean Tree,” with its dance beat.

Not Your Everyday Amateur opens with “The Fall,” one of Brian Kinler’s most beautiful tunes. This is one he’s performed in concert several times. He has said it’s one of his two favorites to perform (the other being “The Leap,” which is on Two). There is such a good, positive vibe about this song, from its sweet, quieter moments, to the great joy and jubilance of its louder, more energetic sections. Andrea Whitney’s work on violin is excellent.

“Morphine” is a song Brian introduced at his live shows approximately a year ago. While “The Fall” makes you want to reach out, this song has the opposite effect, turning your thoughts inward. It feels like a journey into one’s self, through a letting go, a journey that eventually leads back out again.

“Mama’s Gumbo Pot” is a lot of fun, and has become a favorite during his concert performances. Brian sometimes stretches out on it, like he does with “Mr. Walter’s Park.” The version here is a bit tighter, but still retains that great energy, and that sense of play. I love this song. (By the way, there’s a brief moment that always reminds me a bit of the Grateful Dead’s “The Other One” – approximately from 2:06 to 2:18 on this track. Is it just me? Let me know.)

“Open All Night” really feels like the journey of one night, with several different sections, different places the song goes. My favorite part is that loose playing (approximately two and a half minutes in), which then leads to that more manic and wild section. With Brian, you can really hear the joy in his playing, with his fingers dancing on the keys, particularly on this track.

“I’ve Never Seen Snow” is a sweeter tune (this is one that reminds me of the style of some of his work on Two). Andrea’s playing is absolutely gorgeous. There is a wonderful warmth to this song.

“The Ecstasy Of St. Teresa” is one of the more surprising tracks, in that right away it begins with electronic percussion and a pulsing dance beat. It’s quite a bit different from what we’ve heard from him before, but of course still with his unmistakable touch on keys, which is always at the heart of his material.

“Not Even The Rain” is a very pretty and moving piece inspired by the e.e. cummings poem somewhere I have never travelled, gladly beyond. Woody Allen fans will recognize the line that gives this song its title from its use in Hannah And Her Sisters. A title card in that film reads “…nobody, not even the rain, has such small hands.” Michael Caine buys a book of e.e. cummings’ poetry as a gift for Barbara Hershey, and tells her the poem on page 112 reminded him of her. Later we hear her read it. If you haven’t seen that film, you should.

“Not Even The Rain” is followed by “I Want To Love You.” The first time I saw Brian Kinler perform these two pieces in concert, the first led directly into the second, and it was a great combination, so it’s really nice that they’re positioned together on this disc. This one has a more relaxed vibe, but has a distinct beauty. It feels like someone speaking directly, openly, honestly to one person. It’s candid, and even vulnerable in its directness, and is one of the album’s strongest tracks.

“The Bean Tree” is one of the CD’s surprising tracks, with its more electronic sound. It’s a fun tune with a very good groove. Then a couple minutes in, the dance beat becomes more pronounced, driving the song. But it’s Brian’s playing over that beat that, for me, is the most fun element. There is something loose and playful about it which I totally dig, but all within a well-defined structure.

The biggest surprise for me, however, is the album’s final track, “When It Comes To You,” which is so beautiful that it actually brought tears to my eyes the first time I listened to it. This is one of my favorite tracks. The guitar (which is played by Brian on the keyboard) sounds wonderful. This song works to push away the world, so it’s just you and the music. It’s always a great thing when music can hold you and transport you like that.

Posted by Michael Doherty at 1:18 PM