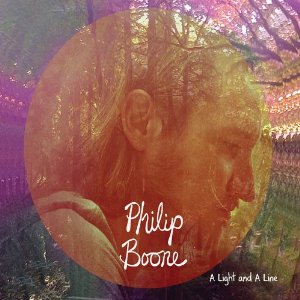 Philip Boone’s new CD, A Light And A Line, is a wonderful blend of folk and country music, with some pop elements. There are lots of sweet, positive, somewhat laid back vibes to these tunes (like “In The Meantime”). I love the general feel of this album. Certainly, one element leading to that overall vibe is Philip’s voice, which has a sweet vulnerability and earnestness (like in these lines from “The Truth Is”: “But if there’s a way/To make a good thing stay/The truth is I don’t even want to know”). There is something true, even timeless about this music – it feels neither contemporary nor nostalgic (though the CD cover art has a certain early 1970s look). There are times when I wonder just how much his living in Topanga Canyon has had an influence on his style, and on the imagery he uses, a lot of which comes from nature (sun or sunshine is mentioned in many of these songs, for example).

A Light And A Line is Philip Boone’s second album, and the songs are all originals. The entire album is good, but there are some stand-outs. My favorites are “Margarita (A Good Friend of Mine),” “Three Short Stories” and “Don’t You Know.”

A Light And A Line opens with "Either Way," a bright country rock tune. Its first lines are, “Well, you can tell me I’m the one/Or use me just for fun on Saturday night/Either way, I’ll be all right.” How’s that for a good attitude? And I love his delivery on “all right,” holding onto “all” a little longer than you might expect. I also like the following lines: “You can buy me fancy clothes/Or keep on talking until my boredom shows.” This is kind of a playful tune about a resilient spirit, sung with a sweet voice. But there is a hint of vulnerability too, in lines like “You can fill the void in me”.


The second track, “Margarita (A Good Friend Of Mine),” is one of my favorites. It’s a pretty folk tune that begins with just acoustic guitar. Its real, full beauty becomes apparent when the other instruments come in (I’m particularly fond of the piano). It’s sung like a letter to someone who is missed: “Dear Margarita, we haven’t spoken in some time/Oh, for the most part things have been working out fine/The weather is warm, there’s almost too much sunshine/Your life’s looking up, but I’m missing a good friend of mine.” The vocals on this one are particularly good. And I love the instrumental section with harmonica and piano. This is a really wonderful song. (By the way, the album’s title comes from this song’s lyrics: “From my dark hole, with only a light and a line/You drew me up, now I’m missing a good friend of mine.”) I could go for a margarita right now.

“Nowhere To Be Found” is quite different, beginning with vocals and a steady thump on the kick drum and handclaps (with some background noise). I prefer the sections with the rest of the band.

“Brother” has a simply beauty to it, with vocals and acoustic guitar. This is an unusual and really good song. Check out these lyrics: “Brother, are you running from the law/In a faded photograph I think I saw/The same face that I once wore.” There is something wonderful in the occasionally somewhat awkward guitar playing – it gives the song an added sense of being true, of being immediate (rather than planned and perfected), which really works for the material.

“Country Song” has a fun, bright, kind of playful feel. It’s one of those easy-going folk and country tunes that make you feel good, with an enjoyable harmonica part. If this doesn’t put a smile on your face, please consult a physician. Here is a taste of the lyrics: “Now here I stand beside the sea/I caught the sun, and then I set it free/I touched the land with my bare hands/Now I own my life, now I own my life.”

“Three Short Stories” has a really nice groove, and features banjo, which I love. I also really like this song’s lyrics, with lines like, “Going nowhere and taking you.” This is another of the album’s many wonderful songs, and it includes some nice work on harmonica.

“Don’t You Know” begins so sweetly, so quietly, with just acoustic guitar and humming, sounding truly pretty. Then the vocals and keys come in, and it’s just wonderful. “Don’t you know I’d climb the mountain for you.” Now this is what I call a love song. Check out these beautiful lines: “Don’t you know that we could live forever more/On the sandy beach of any given shore/And the waves will wash us to sleep/And the stars will be ours to keep.” I absolutely love this song.

It ends at 3:12; then at 3:30, there is another tune, an instrumental – solo piano – that is really pretty. On the CD it’s referred to only as the “piano outro,” so perhaps it’s considered part of “Don’t You Know,” even though there are several seconds of silence before it starts. This piece was written by Charlie Hale.

Musicians appearing on this release include Philip Boone on vocals, guitar and harmonica; Angelo Felder on guitar and banjo; Charlie Hale on piano and organ; Steven Smith on bass; and Greg Rogove on drums.