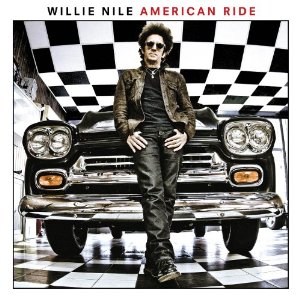 Willie Nile’s new CD, American Ride, is an excellent collection of songs. It opens with some seriously good rock and roll, the kind of music to get you smiling, dancing and feeling fantastic. But there’s a lot more going on here than just fun rock. And Willie Nile’s earnest delivery really sells these songs. The energy on many of these tracks is tremendous, and you will get caught up in his passion, which is palpable on songs like “God Laughs” and “Holy War.” Most of these tunes are originals, written or co-written by Willie Nile. (In fact, there is just one cover song.)

We’re not even through June, so it’s maybe a bit early to talk about the best albums of the year. But certainly American Ride will land on my list of the top ten albums of 2013.

“Life On Bleecker Street” is (obviously) a song about New York, and there is something playful in Willie’s delivery of the verses. There is something devious in his tone, like he’s up to something. It begins, “I live in the basement of a building/In a building on a street in this town/In a building on the street/In the neighborhood complete/With the garbage and the sun going down.” And the chorus is more joyous rock: “This is life on Bleecker Street/Where the tourists shuffle to a boom box beat/Old man sit and stare at their feet/This is life on Bleecker Street.” And there are more “oohs,” which are so perfect, and sound so positive.

“American Ride,” the album’s title track, is an acoustic tune with a slower, sweeter feel. It starts with him leaving New York City (“I’ve got my bag and my guitar, I’m going to get out fast”). This is a good traveling tune, with obligatory mentions of several United States cities such as Philadelphia, Pittsburgh, Memphis, Nashville, Charlotte and San Francisco. I love road trips (and I’m eager for one, especially now listening to this), and this song belongs on any road trip mix. “These roads can take us coast to coast/To points unknown or the way back home.”  (By the way, that’s Steuart Smith on banjo.)  “American Ride” was written by Willie Nile and Mike Peters.

“God Laughs” is ridiculously, surprisingly fun. “God gives, God takes/God pumps your gas and slams your breaks/And why?/Because he’s God.” The first time I heard it, I wasn’t sure quite what to make of it, but then just let go and enjoyed it. These lyrics are delightfully original and passionate. And this is a great rock and roll tune, with some wonderful guitar work, and with backing vocals echoing many of the lines. You have to love these lyrics: “God hears, God sees/God knows your tune and changes keys/God cheats, God steals/God crushes us beneath his wheels/God heals, God kills/God does it all for your cheap thrills.”

“People Who Died,” the album’s sole cover, is an odd choice of covers. After all, this song actually mentions people from Jim Carroll’s life. That being said, this is a kick-ass rendition. And Willie Nile makes it personal by changing a line to include his brother John (“And Johnny, I miss you more than all the others”). It has always felt a little strange to dance to a song that’s about friends who have died, but I can never help myself. This version has some great work on guitar. (By the way, the song was originally on Jim Carroll’s Catholic Boy, one of my all-time favorite albums.)

Willie Nile follows it with another impassioned and intense rock song, “Holy War.” This has an interesting hook on guitar. Its first lines are: “God is great but you’re not/You took dead aim, you fired the shot/Killed my brother, thanks a lot/God is great, you’re not.”  It’s an angry song, and sometimes angry tunes go a bit astray. But I can’t help but fucking love this song (even with the somewhat juvenile line, “God is great, you suck”). And I dig, “God is great/So what?” And then toward the end he repeats the line, “God don’t need you.”

“Say Hey” is a groovy song with a bit of swing, and some great stuff on horns (I actually want more of the horns). Cherry Poppin’ Daddies fans will totally dig this one.

Willie Nile brings it down a bit with “The Crossing,” which begins with just piano and vocals. It’s a beautiful and moving song. “The wind was cold, the risk was great/When we made the crossing.” Strings come in partway through. Rob Morsberger did the string arrangement for this song.

Willie wraps up the album with a great, rousing folk tune titled “There’s No Place Like Home.” This is another that will make you feel really good. “I’ve climbed the highest mountains, I’ve sailed the deepest sea/I’ve been all around the world, yeah, but there’s only one place for me.” It’s also playful, with lines like, “Home is where the heart can linger/Just like frosting on your middle finger.”

American Ride is scheduled to be released on June 25, 2013 on River House Records.

Posted by Michael Doherty at 2:13 PM