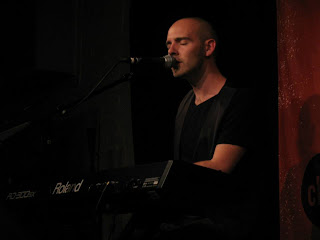 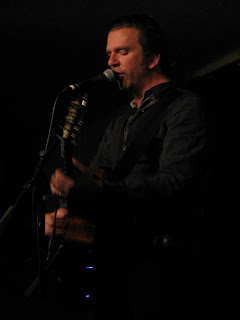 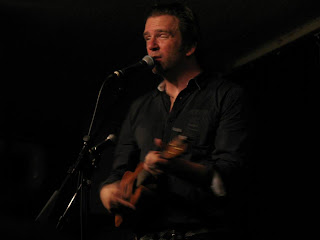 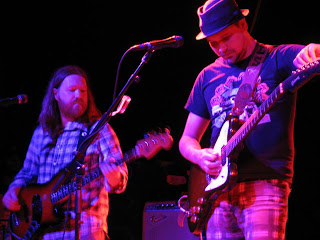 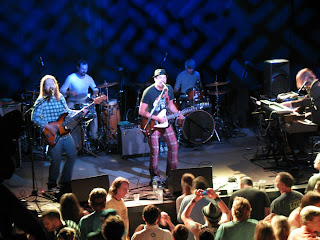 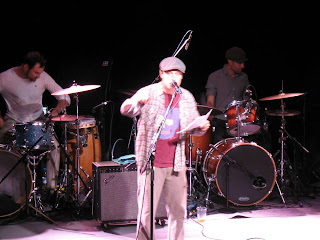 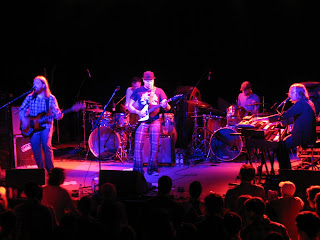 Music plays such an important part in my life. At a recent family gathering, I found myself saying that the best days of my life (so far) have been somehow related to music, that music has played a vital part in most of my fondest memories. That was on June 1st. The night before, I had been to two concerts.

I always try to schedule my trips east around concerts (well, concerts and Red Sox games). This past trip I was able to catch a few excellent shows, including two on Friday, May 31st. I was lucky that both shows were in Harvard Square in Cambridge, only a few doors apart. The first was Chris Trapper at Club Passim; the second was Tea Leaf Green at The Sinclair.

I tried to pick up my Tea Leaf Green tickets at 6 p.m. before heading to the first venue, but I was told they wouldn’t have the guest list until a half hour before the show. I explained to the guy that we had tickets to another show first, and would probably be a bit late to this show, that we wouldn’t get there until maybe 10:30 p.m.
“Try to get here before 10:30,” the guy said.
“Well, it’s whenever the other show lets out,” I said. “Someone will be here, right?”
“Okay. I’ll make sure I’m here until 10:30 p.m.”
And of course then I thought, well hell, we might not get there until 10:45 p.m.

We went over to Passim at 6:30 p.m., and the doors opened maybe ten minutes later. Club Passim has a good vegetarian restaurant attached to it, and you can order food before (and during) the concerts there. I ordered a “Safe & Sound” – a pizza with tomatoes, spinach, basil, and garlic. (I love spinach and garlic.) My brother ordered the same. We devoured our meals, and were still a bit hungry, so decided to order another pizza to split, and to try to order it so that it would arrive just at the end of the opener’s set.

At 8:10 p.m., the opener took the stage – Gregory Douglass, on keyboard and vocals. After the venue’s sound person Eva came up to plug the keyboard in, we were off and running. Gregory introduced his first song as his “universal hymn.” But it was his second song that really won me over: “Sail The Sea." He did a total of seven songs, including a Kate Bush cover.

There was a very short intermission – only ten minutes – just enough time for me to pee and then eat my half of that second pizza. It was 8:54 p.m. when Chris Trapper took the stage. Chris jumped right in, no introduction, no opening stage banter. Though after a couple of tunes, he started joking with the audience. He said, “Good evening. I’m Honey Boo Boo,” and then joked that whoever that is will end up in a rehab sooner or later, with a name like that. He said he was happy to be playing at Passim, the only gig where he could cut his lawn and three hours later be on stage.

Chris Trapper is a really good songwriter, and always puts on a darn good show. His rapport with the audience is definitely part of his draw. He talked about a gig he did in Burbank, and about meeting the guy that does voice overs for movie trailers, an anecdote that had everyone laughing. He then played his own birthday song which he hopes will someday (during his lifetime) replace the traditional birthday song. Hell, I hope so too. His is a much better song.

For those who aren’t familiar with Chris Trapper as a solo artist, you might know him as a member of The Push Stars. And at this gig he talked about hearing one of the Push Stars songs playing at CVS and wanting to share his excitement with the cashier at the store (who totally didn’t give a shit). He then played the song: “Any Little Town.”  He followed that with “Everything shines,” a song featured in There's Something About Mary (a movie still haven’t seen).

Chris invited Gregory Douglass to join him on backing vocals for "Look What The Wind Blew In," and a little later took out the ukulele for a couple of songs, including a new tune about his mom and the beautiful "Away We Go." He also did “Boston Girl,” which obviously had a lot of appeal to this crowd ("If you want to find in love, go find a Boston Girl").

To get to the stage at Passim, you have to walk through the audience. The green room is way in the back, opposite the bathrooms. So at the end of his set Chris said he would just step off to the side and pretend to leave the stage in order to save everyone a few minutes of their lives. And that’s what he did, while we clapped for the encore he had promised to do anyway. He stepped back in front of the microphone and did three songs, ending with “Keg On My Coffin,” which had the audience singing along. The show ended at 10:36 p.m.

I got to The Sinclair at 10:41 p.m., and picked up the two tickets (yes, the guy was still in the ticket booth). But I had to wait for my brother to put his mic stand in the car (he had recorded the Chris Trapper show). While waiting, I could hear Tea Leaf Green playing “Space Hero Pt. 3 (Forever In Space),” a song from their new album, In The Wake. I asked the ticket guy how long the band had been on stage, and he said approximately a half hour. Okay, good, I hadn’t missed all that much.

My brother got back in about six minutes, and we went in the venue, walking up to the front. I took a couple of photos there, but it was seriously loud, and I like to have more room to dance. So we moved to the balcony, where there was plenty of space. Right about then the band launched into “Space Hero Pt. 2,” which is also from the new album. “Gotta get, gotta get, gotta get, gotta get in control.”

Ryan Montbleau then joined them on stage to perform vocals on two songs: “Step Right Up” (a Tom Waits cover) and “Give Me One More Chance” (one of my favorite tunes from In The Wake). It was a total surprise and treat to get to see Ryan Montbleau sing. I’ve never been to one of his shows, though my brother has. He did, however, work from cheat sheets. “Give Me One More Chance” is such a fun, positive song, and this rendition included a vocal jam at end, which was very cool.

We moved to a different balcony, just above the soundboard, and the sound was much better there. Plus, there we were directly facing the stage rather than having to turn sideways. The band then went into “My Oklahoma Home.” They ended the set with “Sex In The ‘70s,” clearly a fan favorite, with “Space Hero Pt. 4 (Letters Home)” stuck in the middle of it.

Tea Leaf Green came back for a two-song encore: “We Aren’t Done” (from the new album) and “Ride Together.” The show ended approximately at midnight. It was a very good night.

Posted by Michael Doherty at 2:55 PM