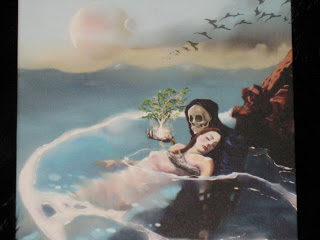 I got turned onto Tea Leaf Green two years ago when they released Radio Tragedy!, which was one of my favorite albums of 2011. So I was excited to check out their new album, In The Wake, which will be released next month. In some ways, this album is even more interesting, as they do quite a lot with song structure here, while still turning in some great lyrics.

Apparently some of the band members have gone through some tough times in the past couple of years, and those difficulties inform some of the themes touched upon in this collection of songs. Yet there are some seriously positive tunes here, particularly “Give Me One More Chance.” Far from being a depressing album, In The Wake is music from people who have made it through personal troubles rather than immersing themselves in them.

In The Wake features all original tunes, with three of the band’s members writing different tracks.

In The Wake kicks off with “Someday.” That song’s opening line, “Someday gonna catch a break,” definitely speaks to me. It’s then followed by, “But is it true?” Steve Owen once sang, “It’s a different kind of cursin’ but someday is the dirtiest word.” Living in the hope of a better someday can be harsh, but sometimes the alternative is worse. And as Tea Leaf Green sing on this track, “Got nothing to lose but my mind.” So no worries, eh? Something about this tune actually lifts my spirits (maybe it’s the line, “And the dream that we might just have a chance”). And at the end he sings joyously, almost triumphantly, “Yeah, I’m gonna lose my mind.” That’s basically the attitude you have to have. “Someday” was written by Trevor Garrod.

Things bet a bit harder with “Space Hero pt. 2.” Part two? But for a hero, things are still messy for this character, as he sings at the beginning, “Gotta get, gotta get, gotta get, gotta get, gotta get, gotta get, gotta get in control.” Just the idea of a space hero makes me think of certain music from the 1970s. And of course the line “I was an apeman” reminds me of my favorite Kinks album, which was released in 1970. But the lines I love most are “You might remember/A little night in Denver/You wore a sweater/I shot a laser.” This is a song that grew on me with repeated playing. It ends with a spoken word reference to another great record of the 1970s, Blood On The Tracks.

There is also a 1970s influence on “Penny Saved,” with the disco beat (dig that hi-hat) and the style of the backing vocals. “Another day’s gone for good/And all that’s left is firewood.” Plus, this tune has horns, which sound great, and the jam section is very cool. “Penny Saved” was written by Trevor Garrod.

“All Our Love” has something of a sweet feel to the vocals, helping to make it one of my favorites on this album. It begins, “You can go, you can change/Maybe I gotta stay the same/You can cry, you can blame/Baby, two can play that game/It’s so cold in this room.” And there are strings, which I love. This is another track that feels really positive to me, especially as they sing “And from one love comes a new love.” There is something gorgeous about this song, which was written by Josh Clark.

But certainly the most positive vibes come from “Give Me One More Chance.” This is a delightful, happy pop tune. Here is a taste of the lyrics: “Give me one more chance/I know I don’t deserve it/But you can’t tell me no/Or pretend you never heard this/Beating heart of mine.” This is the first tune I heard from this album (they released a video a little while ago), and I loved it immediately. There are moments when the guitar has a great 1960s feel that I totally dig, and there is another moment when it has a country feel. There is also something of a reggae thing happening on this track. It all adds up to something wonderful. On top of that, guest vocalist Lesley Grant joins them to make the song a duet. Dan Lebowitz plays guitar on this track. This song is seriously catchy, and it puts me in a great mood every time I listen to it.

The second part of “Space Hero” – that is, “pt. 3” - begins quietly and beautifully with acoustic guitar. This song has a pretty, though lonely feel to it even before the line, “Trying to find my place in the human race.” You don’t need to be in space to feel that way, eh? The third part, “pt. 4,” has a great pop groove at the start, and I absolutely love the bass. It then becomes more of a rock tune, and reminds me just a bit of Bowie for a few moments before it goes off into a harder instrumental section.

In The Wake concludes with “We Aren’t Done,” a song with several interesting changes. I particularly enjoy the ol’ time instrumental section – it’s playful and delicious. And the song ends with some silly fun on piano. And remember: “There’s nothing wrong with acting like a child.”

Tea Leaf Green is Josh Clark on guitar and vocals, Trevor Garrod on keyboards and vocals, Reed Mathis on bass and vocals, Cochrane McMillan on percussion and Scott Rager on drums.

Joining them on this release are Jeremy Korpas on guitar, Lesley Grant on vocals, Leslie Helpert on vocals, Dan Lebowitz on guitar, Graham Patzner on violin, Lewis Patzner on cello, Mike Olmos on trumpet and Adam Theis on trombone.

In The Wake is scheduled to be released on May 14, 2013 on Greenhouse Records. The band’s CD release show is May 18, 2013 at The Independent in San Francisco.
Posted by Michael Doherty at 2:14 PM