A Buck Dancer’s Choice: A Benefit For The Rex Foundation (2013) CD Review 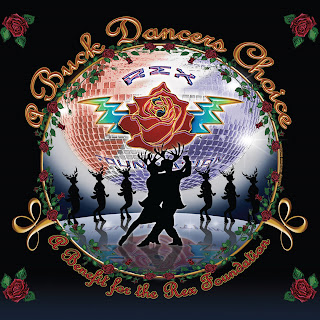 A Buck Dancer’s Choice: A Benefit For The Rex Foundation is a two-disc set of music performed by ALO, Bob Weir and the Mickey Hart Band on December 1, 2012 at the Fillmore in San Francisco.  There were three sets that night. These CDs features music from all three sets (and there is a lot of music; each disc is just over 79 minutes).

The first disc opens with songs by members of ALO (Animal Liberation Orchestra). “Listen To The River” has a groovy vibe and good vocals, and a nice lead guitar part done over some percussion. “Easy” is a really good little acoustic number. “But these are desperate times to be alive/To try and thrive/Easy, don’t push, don’t shove/Just try to lay back and love/Your life for a minute/Because you’re livin’ it, baby.”

Bob Weir joins them for two songs. The first is “Me & My Uncle,” the song the Grateful Dead played more times than any other song. This is a cool, slightly slow acoustic rendition, with a nice instrumental section. The second song is more surprising, an interesting rendition of “Dark Star.” It’s still odd to me to hear Bob sing Jerry’s songs. During the second verse, Bob really holds onto certain notes, stretching out those words, giving the song a different twist.

Then – and this is a total joy – Bob Weir does a solo acoustic set. I got to see Bob Weir and Rob Wasserman perform a series of acoustic shows in 1989, and this music took me back to those great days. Bob starts with “Loose Lucy,” and is clearly having fun with this Jerry tune. “Thank you for a real good time.” There’s a playful shout during an instrumental section. Is it possible to jam by yourself? Well, Bob does it. These aren’t short renditions. Three of his four tunes are each eight minutes.

And it seems an odd thing, but he does a solo acoustic version of “Playing In The Band.” Holy moly. The beginning has a completely different feel, and is wonderful. And then he kicks in, with no lack of power, I assure you. At the end, Bob jokes, “I had anticipated doing that a bunch smoother.”

Bob also does “Peggy-O” and “Black-Throated Wind,” the latter being an excellent song that first appeared on Bob’s 1972 “solo” album, Ace. This version features a fairly powerful vocal performance, with a particularly interesting delivery of “You’ve done better by me than I’ve done by you.”

And then the Mickey Hart Band performs. They begin with a tribal-sounding version of the “Samson & Delilah” beat. It’s pretty amazing. And then they launch into the tune – a great, intense rendition. That leads to “Cut The Deck,” a song written by Robert Hunter, Mickey Hart, Cliff Goldmacher and Ben Yonas. This song is kind of beautiful at times, and is one I hadn’t heard before. “All I ever wanted was some of your love.”

The second disc is the Mickey Hart Band, with the first two tracks featuring Bob Weir sitting in on vocals and guitar. The first is “China Cat Sunflower,” and it includes the old shout of “China Cat,” which the Dead did way back at the beginning – a very cool and surprising touch. A good jam leads perfectly into “I Know You Rider.” This is a really good, smooth rendition, and Bob sings the “northbound train” verse.

“Heartbeat Of The Sun” begins as an odd, moody, spacey tune, with elements of electronica. Seven and a half minutes in, it changes, taking on an insistent beat and increasing in pace. (I wonder how many audience members timed their trips to peak at this point.) There is a bit of stage banter from Mickey at the end of the track (about the Rex Foundation and his wedding anniversary).

They do another Grateful Dead tune, “Franklin’s Tower” (a song the Dead played at my first show – yes, without “Help On The Way” and “Slipknot”). “If you get confused, listen to the music play.” This version has a cool jam toward the end, mostly vocals and percussion.

“Time Never Ends” is electronica with some sampling of political speeches. It has a bit of a trippy feel, and I’m totally into it. “Time stands still and always will.” The vocals at times remind me a bit of Grace Slick.  And then we hear that familiar Bo Diddley beat, and yes, we’re off into “Not Fade Away.”  The disc ends with the always-sweet “Brokedown Palace.”

A Buck Dancer’s Choice: A Benefit For The Rex Foundation is available as a download, and on CD through nugs.net.

Posted by Michael Doherty at 1:58 PM