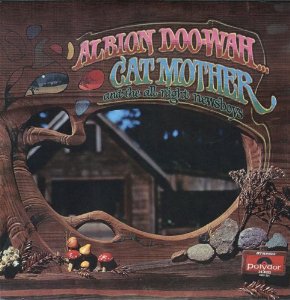 Albion Doo-Wah is the second album by country rock band Cat Mother And The All-Night Newsboys. Their first album, The Street Giveth…And The Street Taketh Away (1969), was produced by Jimi Hendrix, and yielded a top-40 hit single, “Good Old Rock And Roll.”  Their second album has never before been released on CD, and is a truly excellent album.

If you haven’t heard of these guys, you’re not alone. I hadn’t heard them either, though now after listening to this album, I find it remarkable that no one turned me onto them before. Their sound is right up my alley. It’s a great dose of late 1960s, early 1970s rock, but with some traditional bluegrass instruments. It’s an excellent combination, making their sound distinct. There is also a playful quality to a lot of their material, which helps to make it still feel fresh. Their sound is quite a bit different even from others in the country-rock vein of the time. If you like Country Joe & The Fish, The Band and The Byrds, you should definitely check out this album.

By the way, one of the band members is Jay Ungar, on violin and mandolin (as well as guitar and vocals). You might know him from his work with David Bromberg and with Molly Mason. And you almost certainly know him for his song “Ashokan Farewell,” which was used in Ken Burns’ documentary The Civil War.

I do wish some new liner notes had been written for this release, especially as it’s never been on CD before. I want more information about this band.  I also am excited to hear their other releases, though for now I’m going to enjoy this wonderful CD.

The album opens with “Riff Raff,” a groovy rock number with just a touch of funk and with some cowbell. Here is a taste of the lyrics: “And every time I turn around, you’re always trying to shoot me down/But you don’t know, you tell me you don’t know/And then you say that you don’t want no riff raff hanging around.” It’s basically a fairly straight rock tune at first. But then there is a very cool jam section, led by keys and then by violin (coming as a nice surprise) over a good, steady rhythm on bass and percussion.

“Turkish Taffy” is a cool mix of country with a European old-time feel (especially due to the violin), and features some really nice touches on piano and mandolin. There are also some good lyrics: “I feel older now/So much older now/Well, time will tell if I’m wrong or right/It makes no difference how I cry/If you want to come and rescue me, then you just go ahead and try.” By the way, this song is much quieter than the other tracks – I had to turn the volume up quite a bit. I’m not sure if it was that way on the original release, or if it happened during the remastering (or if it’s just my copy).

“Booneville Massacre” (or perhaps “Boonville Massacre” – it’s spelled both ways on this CD) begins with an urgent bit of violin, and then a steady rhythm comes in. I really love the mix of bass, keys and violin on this song.

“I Must Be Dreaming” begins much more firmly in country territory, led by the fiddle. This song has such a great feel as well as some good vocals. “It just keeps on raining when you know the sun ought to shine/Could you help me one more time?/Could you let me have a dime?/This time I’m leaving/I said I must be dreaming.” This song also boasts some wonderful instrumental sections. At the end it speeds up for one last great fun instrumental burst led by the violin, which I love. This is one of my favorites from this release. It was written by Bob Smith.

“Last Go Round” has a slower, sweet vibe and a beauty (in the same way a lot of songs from The Band do). Here is a taste of the lyrics: “So have another sip of wine/It may help you to relax/You know that you’ve got to draw the line/Everybody is together at last/Look out, look in.” Lyndon Lee Harry provides some nice vocals on this track. (By the way, this is another of the many songs that rhyme “self” with “shelf.”)

“Strike A Match & Light Another” has a fun country vibe. It’s one of those great pot-smoking tunes (though I’m not sure it’s really all that pro-pot, with the line “But there ain't much you'll be thinking once you've started smoking pot”). This song is great fun, and one I need to share with my friends. I really dig the vocals. Here is a bit of the lyrics: “When your feet are in the stirrups and your ass is on the ground/Cause the grass that he's been eating is the finest stuff around/Well, let us not remember boys and let us not forget/Strike a match and light another marijuana cigarette.” “Strike A Match & Light Another” was written by Jay Ungar.

Cat Mother does a seriously rocking rendition of “Been All Around The World” that got me dancing in my apartment. I’m used to the slower, more woeful version by the Grateful Dead, and also the folk versions by Dave Van Ronk and Bill Morrissey (which they did under the title “Hang Me, Oh Hang Me”). This is a tremendously cool version, with some lyrics I hadn’t heard before. Lyndon Lee Hardy provides some backing vocals on this one.

“Theme From Albion Doo-Wah” is an instrumental rock track (this one too seems a bit quieter than the other tracks). It’s a pretty nice jam, but it’s the track that excites me the least. There is a section approximately 1 ½ minutes in that reminds me of something from Neil Young’s Everybody Knows This Is Nowhere album.

Albion Doo-Wah concludes with “Rise Above It,” a wonderful gospel-flavored folk tune. It feels like a traditional song (reminding me of “Will The Circle Be Unbroken”), but is an original tune written by keyboardist Bob Smith. It begins, “See the poor man in his misery/See the rich man in pain/When the hand comes down to touch them/Don’t they both look the same/So rise above it/Rise above it/Leave your worries behind/For the poor man has treasures/That the rich man can’t buy.” This song is an excellent way to end the album.

Albion Doo-Wah was released on June 4, 2013 through Real Gone Music.
Posted by Michael Doherty at 4:15 PM