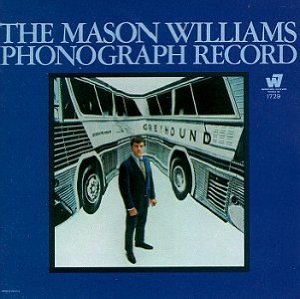 I have a compilation of hits from 1968 that features two instrumentals – Paul Mauriat’s “Love Is Blue” and Mason Williams’ “Classical Gas.” I would listen to those songs over and over, sometimes for hours. I think 1968 is one of the most interesting years for music (and for things in general). Music had a lot to say that year, so it’s interesting that two instrumentals were among the year’s best songs. And it was in 1968 that artist/author/musician Mason Williams released his first record, The Mason Williams Phonograph Record.

Before this, he’d been writing for The Smothers Brothers Comedy Hour. So of course this album is not all that serious (although it sounds as if it is, like the work of the best jesters). This is not a comedy album, but often makes me laugh. It’s difficult to imagine just exactly what reaction he’d hoped the record would get. This is a truly interesting collection of songs. All of songs are originals.

The Mason Williams Phonograph Record begins with “Overture,” touching on several of its themes, then goes into “All The Time.” That song’s first lines, “I’m not exactly leaving you/I just won’t be around all the time,” make me laugh. It doesn’t have a silly or comedic sound, but rather has the sound of one of those big lavish 1960s pop numbers. I love that Mason Williams delivers his lyrics with an earnest sweetness, which of course makes the song funnier.

This album has a lot of odd surprises. For example, there are a couple of incredibly short tracks. “Dylan Thomas” is a strange, very short folk song playing on “London Bridge Is Falling Down.” “Life Song,” another short song, asks, “Isn’t life the perfect thing to pass the time away?” And then “Wanderlove” has an unexpected percussion solo at the end.

“She’s Gone Away” is a fun kind of catchy pop rock song, steeped in 1960s sounds, and it totally works on those terms. Every time I listen to it, one line cracks me up - “She’s gonna stand around in her shoes.”  This track also features some nice work on guitar.

Of course, the centerpiece of this record is that excellent instrumental, “Classical Gas.” This song was released as a single, and reached #2 on the Billboard Hot 100 (“Hello, I Love You” was #1 at the time – not bad company at the top). This song has such a great feel, right from its opening guitar part. And it has a beautiful build. I always love listening to it, and am usually a bit bummed when it ends (which explains why I would sometimes just listen to it over and over).

“Long Time Blues” is a catchy country blues song, with some nice backing vocals. I really dig the piano on this track. Here is a bit of the lyrics: “Sitting by the window/Waiting for the dawn/Waiting for a girl/A long time gone/Long time gone is a lonesome sound.” This is one of the album’s strongest tracks.

One of the odder tunes is “Baroque-A-Nova.” The only lyrics to this song are “ba ba-ba ba ba-ba.” Go ahead, sing along. You know the word. But the goofiest song on the album is certainly “The Prince’s Panties,” with lines like “He thought life was stupid and it was for him” and “He liked butter for its color.”  He called his many dogs “panties” for they panted, leading to this song’s tragic ending: “And the prince was eaten by his panties.”

The Mason Williams Phonograph Record concludes with “Sunflower,” which begins with guitar and whistling and actually is quite pretty. This instrumental track then changes nearly two minutes in, though retains its beauty. This is a really wonderful tune, one of my favorites from this album.

Posted by Michael Doherty at 5:10 PM