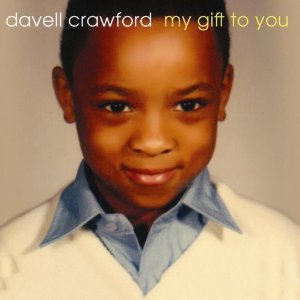 Davell Crawford’s new album (his first in many years), My Gift To You, is such a joy to listen to. The first time I put it on, I was taking care of stuff around my apartment – you know, stuff I’d prefer not to do – and this album had me smiling the whole time. There is something both soothing and uplifting about so many of these tracks. But there is also a lot of fun material here, particularly “Southern Woman” and “Going Back To Louisiana.”

My Gift To You combines elements of jazz, gospel, blues, folk and pop. It is mix of original material and interesting choices of covers, including songs penned by James Taylor, Steve Winwood and Billy Joel. The covers he really makes his own. This album also features some great guests, including Dr. John, Nicholas Payton, and Steve Riley.

The CD includes extensive liner notes, with Davell Crawford’s thoughts on each of the tracks. His brief essay on why he hadn’t released any music for a while might come across as a bit self-indulgent, but that’s okay. There is also a longer piece by Geraldine Wyckoff. My Gift To You is dedicated to New Orleans (Davell Crawford’s home), and some songs deal in a very direct way with that city, like “Stranger In My Own Home.”

My Gift To You opens with “Creole Man,” a song that approaches from a distance, rushing at you. Then when it reaches you, it quickly takes on a tribal feel, mixed with orchestral sounds. And hell, that’s just the instrumental intro. Davell Crawford’s vocals have a soft, smooth, almost feminine quality, but there is a power too. This song is a very strong opening track, with a sound all its own, that gives you high expectations for the rest of the album. “Creole Man” was written by Davell Crawford.

“River/White Socks & Drawers” begins with a good, funky groove, particularly in its vocals. Dr. John provides some very cool spoken word vocals on this one (“You know the spirit of the river/Ain’t gonna never lie”). And it’s the backing vocals that really make this track special. There’s also some nice work on saxophone by Donald Harrison, Jr.

“Junco Partner Cud’in Joe” has a scratchy record effect that helps give it a kind of 1970s, strangely romantic, late-night feel at the start. This song has a subdued jazzy feel that pulls you in. It’s a song that feels like it could pounce on you at any moment.

It’s been a while since I’ve listened to Billy Joel, but Davell Crawford’s cover of “The River Of Dreams” is a reminder that he wrote some damn good songs. This rendition is so sweet, so beautiful, so touching, due in large part to Davell’s vocals. And I do love the saxophone part by Donald Harrison. There is also an interesting backing vocals section toward the end.

Davell Crawford follows that with a cover of James Taylor’s “Fire And Rain” – a slow, thoughtful version. For me, the trumpet part by Nicholas Payton really makes this one stand out. “Southern Nights/Many Rivers To Cross” is a really wonderful instrumental track combining the two songs, and performed by Davell Crawford solo on piano.

“Don’t Ever Be Blue” is one of my favorite tracks. It just really has a good vibe about it that raises my spirits. It’s one of those songs that makes you feel good about being alive, and it features Steve Riley on accordion and fiddle. “Don’t Ever Be Blue” was written by Davell, and his vocals are particularly wonderful on this one.  “Just keep going on, and keep singing your song and doing the best you can do/Don’t ever be blue.”

“Southern Woman (Ain’t Nothin’ Like A)” is a fun, energetic song written by Davell Crawford. He sings, “I been all around the world/I fancy life and the pretty girls/But still one thing I wanna find/A southern woman, make her mine.” This song has a great groove, with nice work on horns (Marlon Jordan on trumpet and Clarence Johnson III on saxophone).

But the track that is the most fun is “Going Back To Louisiana,” which features Dr. John on lead vocals, and some delightful backing vocals. I love the vibe to this song; it has a great, kind of slow, bright feel. Steve Riley is wonderful on accordion and fiddle, and I love Davell’s work on piano. Everything just works perfectly to create a groovy atmosphere and one of the CD’s best tracks. When Dr. John asks, “Can you dig it?” I can’t help but answer, “Oh yeah.” “Going Back To Louisiana” was written by Davell Crawford.

I’ve always loved Blind Faith’s “Can’t Find My Way Home.” Davell Crawford does a good job with it, giving it his own interpretation. Though I actually don’t like the backing vocals echoing the title line, which seems to take away from the emotional impact of it.

My Gift To You ends with the pretty “Ode To Louisiana,” complete with a string section. In this one, Davell sings, “I’ll travel the whole wide world over/And sing of your beauty and love.”

(Note: I also posted this review on Pop Culture Beast.)
Posted by Michael Doherty at 10:55 AM