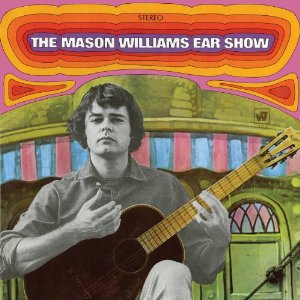 Everyone knows Mason Williams for that instrumental hit “Classical Gas,” a song included on his first record, The Mason Williams Phonograph Record, from 1968. Later that same year, Mason Williams released his second album, The Mason Williams Ear Show, which Real Gone Music has now re-issued. I think this is actually an even better album than Phonograph Record, though apparently it didn’t do as well commercially. Sure, it has no “Classical Gas,” but overall the material is really strong on this release, and honestly it is just totally delightful. This is a fun album, particularly tracks like “(Whistle) Hear,” “The Last Great Waltz” and “Cinderella-Rockefella.” And there is a catchy instrumental track, titled “$13 Stella” (named after his first guitar, which is pictured on the album’s cover).

The Mason Williams Ear Show kicks off with “Road Song,” a soft, slow traveling song. I like these lines: “How long has it been since I’ve been somewhere/Somewhere that means something to me.” (We can forgive him for mispronouncing “Oregon” a little later in the song.)  The song seems to gain in power and meaning as it goes on. I feel the song wouldn’t be as effective if it were shorter. (At five minutes, it’s the album’s longest song.)

“Baroque-A-Nova” was also included on Phonograph Record. While it’s odd that he put this song on two albums in the same year, this version is quite a bit different from that on the previous album. Gone are the “ba ba” vocals, and without them, the song has much more serious tone.

“(Whistle) Hear” is a deliciously fun song, with banjo and some peculiar lyrics. “So he listened to the shades of nothing/He heard rocks, sky, sun, eyes/Wood, water, earth/Time flying by/Skin and grass/But none surpassed the sweet sound of love.” With lyrics like these, it’s no question that this song came out in 1968. “But things began to get a little bit weird.” Indeed.

In high school a girl taught me how to waltz in the parking lot outside a Dunkin’ Donuts. I still think of that from time to time, but particularly while listening to “The Last Great Waltz,” with lines like “She was waltzing by herself there in the little nook/He quietly walked to where she was to get a better look/She was a little different from either you or me/For she did not have two good legs, she had one two three.” This is one of the album’s best tracks. The waltz section is glorious, and totally playful. The girl sings, “I like the waltz/It has its faults/It’s not much fun unless danced by two/I wish I knew/Somebody who would waltz with me/I’m so blue Danube.” And holy moly, the female vocalist here is Jennifer Warnes (who’d later sing with Leonard Cohen). (She was listed as “Jennifer Warren” on the original release.) I seriously love this song. You owe it to yourself to give this one a go. Seriously, it is so enjoyable.

“Cinderella-Rockefella” is followed by “Generatah-Oscillatah,” a very odd and wonderful instrumental featuring synthesizers. This song had me smiling in a slightly demented way. Let me know if it has the same effect on you; otherwise I might need to see someone.

The Mason Williams Ear Show ends with “Saturday Night At The World,” which is kind of pretty and features strings.  Here is a taste of the lyrics: “It’s a Saturday’s night at the world/I am thinking about a girl/And how useless to search it becomes/When you seek all the answers in one.”

This re-issue of The Mason Williams Ear Show was released on June 4, 2013 through Real Gone Music. It features new liner notes by Gene Sculatti, and also includes the original liner notes by Hal Halverstadt.
Posted by Michael Doherty at 5:22 PM