Juliet And The Lonesome Romeos: “No Regrets” (2013) CD Review 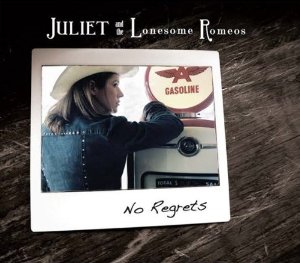 I first became aware of Juliet And The Lonesome Romeos when a friend handed me a flyer for one of their shows. Knowing I’m a huge Shakespeare fan, she pointed out the band’s name. So right away I was interested. But it was after watching a couple of the band’s live performances online that I knew I had to get their CD.

No Regets is the debut album from Juliet And The Lonesome Romeos. This album is mainly folk and country, but definitely with heavy pop and rock influences. For example, listen to “Narcissus” for more of a rock tune, and “Last Kiss” for a pop song. All of the songs here are originals, all but one of them written or co-written by Juliet Simmons Dinallo.

No Regrets opens with its title track, a song about being strong on one’s own, and Juliet has just the voice for it. Her voice has beauty, but also power; hers is a voice that’s not shy or fearful.  In this one she sings, “You cast a spell on me, but I’m alone all the time, all the time/Empty words you say are killing me today/So goodbye, this time I can’t stay.” I also like this line: “I can’t see your face, but I could always see right through, right through you.” Of course, endings are rarely definite, as Juliet hints in a line late in the song: “So goodbye once more until we meet again.”

“Wishing Well” has an interesting structure with regards to the way it tells its story, the way it creates the character and relationship through shifts in time. It begins “Just a girl of twenty-two/Thinking long and hard about you/Since I got the news today/Telling me you’ve gone away.”  Then, “I don’t know what I’m supposed to feel/It’s a little bit surreal/Been wishing for the day/You would finally go away/But it doesn’t ease my mind/It just takes me back in time.” So then she uses images of childhood, including a wishing well. The song then moves forward ten years from its opening point: “Just a girl of thirty-two/Thinking long and hard about you.”  There is also some nice work on electric guitar, and that part shows time passing, after which Juliet sings, “Still a girl at forty-two/Thinking long and hard about you/But what am I supposed to do/This is all I ever knew.”

“Song For You” is a pretty song, an unabashed love song, in which she sings, “If I could, I’d give you the world.” In this one she sings about the song itself, saying that “it’s straight from the heart,” and you get the sense that that’s true of all her songs. She really opens herself, giving herself in lines like “I simply I don’t know what I’d do without you/I don’t know what I would do/This is a song especially for you/It’s all that I have, it’s all I can do.”

“Narcissus” is more of a rock tune, with a certain amount of anger in Juliet’s delivery, and an electric guitar lead part. She sings, “So I’m packing it up, I’ll see you in hell/Maybe one day you will tell/That I wish you could have loved me like you love yourself.”  (It’s also one of the world’s many songs that rhyme “self” with “shelf.” Not to call this band out, but I think it’s time to call a moratorium on that particular rhyme.) Juliet And The Lonesome Romeos follow this rock song with a pretty acoustic tune, “Winter Night.”

As I mentioned, it was the Shakespeare connection that first got me interested in this band. And as it turns out, Juliet’s father was a Shakespeare scholar, so she is actually named after that famous teenager. There is another Shakespeare reference on this album, in the song “Unkindest Cut,” a song about her father. The song’s title comes from a line from Shakespeare’s The Tragedy Of Julius Caesar. In Act III Scene ii, Antony tells the crowd about Caesar’s murder, and when he mentions Brutus’ part, he says: “This was the most unkindest cut of all;/For when the noble Caesar saw him stab,/Ingratitude, more strong than traitors’ arms,/Quite vanquish’d him.” About her father, Juliet sings, “Between me and the madness he didn’t get to choose/To see him fall is the unkindest cut of all.”  (By the way, in this song, she mentions how people say “Everything happens for a reason.” I too hate when people say that, for it’s such a simple, meaningless thing to say, and it is always a lie.)

“Faded Highway” is one of my favorite tracks. It’s a gorgeous country tune that is really driven by Juliet’s vocals. There is a delicious sadness in her voice. Here is a taste of the lyrics: “On a faded highway just this side of nothing/Will I ever find my way/Broken hearts and lost souls/They’re scattered all around me.” There are also some nice backing vocals. “Faded Highway” was written by Michael Dinallo.

No Regrets ends with “Learn To Love Again,” a song of heartbreak and hope. “I want to sail away on a ship of fools/To a desolate isle/When I can hide for a while/Where my heart can mend/And I can learn to love again.” She adds an appropriate weariness to her voice for certain lines. This is one of the album’s strongest tracks, and there is a really nice lead section on electric guitar.

No Regrets was released on January 15, 2013 through Tree O Records.
Posted by Michael Doherty at 4:44 PM