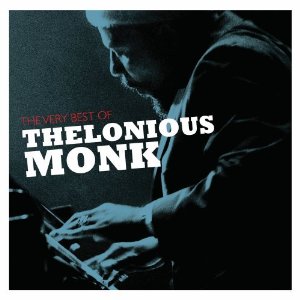 The Very Best Of Thelonious Monk is a new collection of recordings from Monk's years on Prestige and Riverside Records, from 1954 to 1958. (He actually released albums on Riverside into 1961, but this collection only goes as far as 1958.) This collection features mostly original compositions. There are only two covers: "Sophisticated Lady" and "Honeysuckle Rose."  Besides Monk himself, these tracks feature several other incredible musicians, such as John Coltrane, Percy Heath, Art Blakey, Sonny Rollins, Coleman Hawkins and Max Roach.

"Blue Monk" is one of his Thelonious Monk's most famous compositions, this one coming from Thelonious Monk Trio (a 1954 record on Prestige). This is the first recording of this song. A solo piano version would appear on Thelonious Alone In San Francisco several years later. And of course the piano drives the song in this version too, with some great, playful moments. But this version also has Percy Heath on bass and Art Blakey on drums, keeping a good groove for Monk to play over and with. And toward the end, Percy Heath has a cool lead section, which then takes us into an unusual drum solo by Art Blakey, which I totally dig.

"Bemsha Swing" is an interesting tune co-written by Thelonious Monk and Denzil Best. It features an odd beginning with brilliant bursts on horn by Clark Terry on trumpet and Sonny Rollins on tenor sax, with Thelonious Monk then recreating those on piano, in a softer way. And he soon is going off into other related territory. I'm seriously crazy about Max Roach's work on drums and timpani here (and yes, he has a solo). This track originally appeared on Brilliant Corners, though Monk had recorded an earlier version with Miles Davis in 1954 (which was released on Miles Davis And The Modern Jazz Giants).

"Honeysuckle Rose" is one of this collection's two covers, this one written by Andy Razaf and Thomas Waller. This is a fun, sprightly tune (particularly due to Monk's playing, as he delivers some delicious and surprising stuff). This song features a lead on bass by Oscar Pettiford, and a drum solo by Art Blakey. The moment when Monk comes back directly from Blakey's solo is fantastic. This track is from The Unique Thelonious Monk (1956).

"Ruby, My Dear" begins with some beautiful, sweet work by Coleman Hawkins on tenor saxophone. It isn't until four minutes in that Monk takes his lead, and then only briefly. His playing is soft and sweet, different from most of his work.

"Ruby, My Dear" is from Monk's Music, the only album to be represented by more than one track in this collection. The other tune from that record is "Well, You Needn't." But Monk actually composed and recorded both tunes much earlier in his career. "Well, You Needn't" features both John Coltrane and Coleman Hawkins on tenor saxophones.

"Nutty" is the opening track from the live album Misterioso, which was re-issued earlier this year as part of Concord Music Group's Original Jazz Classics Remasters series. This was recorded at the Five Spot Cafe in New York City in August of 1958, and features some wild, spirited playing by Johnny Griffin on tenor sax.

This collection concludes with a solo version of Thelonious Monk's most famous composition, "'Round Midnight," taken from Thelonious Himself (1957), his first solo record for Riverside (the second was Alone In San Francisco).  This song has such a great understated force to it, obvious in this solo rendition. (By the way, a version of this song appears as a bonus track on the re-issue of Misterioso.)

Posted by Michael Doherty at 12:12 PM