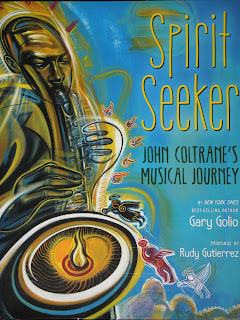 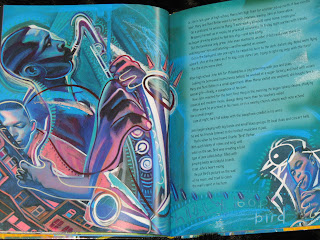 Music strengthens and unites us, and often helps us through the troubled times. And in Gary Golio's new book, Spirit Seeker, he shows that music did just that for John Coltrane. Music helped him in his early years, to find hope and a voice after a series of family deaths left a void in his life.  Golio clearly shows that it's never too early to try to give children an appreciation for music, and this book should help to do exactly that.

Spirit Seeker: John Coltrane's Musical Journey is a biography, but with a focus on the music, and finding one's voice within it, a theme that children should appreciate and understand. In high school, John Coltrane was able to get free lessons for a community band, with used instruments that were donated. Later, after high school, John Coltrane's mother bought him a saxophone of his own, and he became more serious about it. Golio writes, "He began taking classes, studying classical and modern music, always doing more than his teachers asked" (p. 17), a good, positive message for young readers.

I don't know a lot about John Coltrane's life, but I like that this book isn't afraid of mentioning some of the problems he had. Besides the early tragedies, the book also mentions Coltrane's drinking and drug-taking (including an interesting anecdote about how he was "told to 'walk the bar' with his sax - parading along the top of the counter like a circus performer," p. 18). And then Golio does directly equate quitting drugs with Coltrane's success.

There is a heavily religious tone to this book, especially obvious in lines like, "Sad and tired, John soon stopped going to church or reading the Bible" (p. 18). However, while religious, the book doesn't preach or push any one religion, and in that regard it's more spiritual than religious.

Every page of this book is illustrated by Rudy Gutierrez. The paintings really reflect the subject and mood of the story, and children will likely react positively to the images. Most of them are brightly colored, and quite pleasing to the eye.  There is a lot going on those paintings as well, the artwork often as complex and wild as the jazz music itself.  The artwork directly illustrates some of what Golio says on a given page, putting images to the words, but goes beyond that, by portraying the emotions and thoughts as well. For example, on the page where Golio writes about how John Coltrane took a job shining shoes, we see in the artwork the young John knelt before a pair of legs. But the legs also are a series of messages such as "Colored Seated In Rear."  And the colors are darker around those legs than elsewhere in the painting. And toward the bottom of the painting, a mop held by one of his relatives is washing away similar messages.

An afterword puts the story into the context of the times. Plus, there's an author's notes about drug use, particularly in relation to musicians, an issue important to him, as he has worked counseling children and teens about addiction. There is also an artist's note, about his inspirations and aspirations, and a bit about how he works. By the way, Rudy Gutierrez created the artwork for Santana's Shaman album.

Spirit Seeker: John Coltrane's Musical Journey was published by Clarion Books, Houghton Mifflin Harcourt on October 23, 2012. If you buy this book for a child, I suggest also giving him or her a Coltrane CD at the same time, perhaps one of the albums that is mentioned in the book - Giant Steps or A Love Supreme. The child can listen to the music while reading the book for a fuller understanding and appreciation.

Posted by Michael Doherty at 1:56 PM