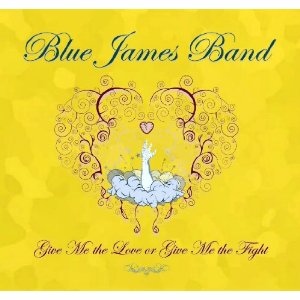 Give Me The Love Or Give Me The Fight, the third album from Blue James Band, features all original songs written by singer/guitarist Clifton J. Williams. This music is full of positive vibes, and this is a band that seems like it would put on a good live show, a band that would get folks dancing. Most of these songs have several changes, and are not simple rock tunes. So there is quite a bit to sink your teeth into. I feel the band is often most successful in its brighter, happier moments, like during the chorus of "Setting Sun," which has a great feel to it, and of course during the fantastic title track. These folks are also clearly accomplished musicians (check out the excellent instrumental section to "Between Two Lands"). Blue James Band is based in Boston.

"Not Ready For You"

This album opens with "Not Ready For You," a track which begins as straight rock, but takes on a reggae beat once the vocals come in, and it's that section that I appreciate more. Though interestingly when it slips back into the rock vein, it really works. That build has a good flow to it, and I'd almost rather the song start with the reggae section and have that build, that transition be more of a sweet surprise. There is something bright and friendly in the vocal delivery, particularly on the title line, "I'm not ready for you."  The more I listen to this song, the more I dig it.

"Give Me The Love Or Give Me The Fight," the album's title track, is one of my favorites. It begins with a great groove on bass, and a wonderful rhythm (I really dig the drums on this track). And when it kicks in, with keys and horn, it becomes great fun. This song reminds me a bit of Paul Simon from the late '80s, early '90s, especially in the vocal patterns in certain sections. Here is a taste of the lyrics: "Well, I don't care what you see, just see it in me/And I don't care what you feel, just feel it for me/And I don't care if you take everything/Just give me your love or give me your fight."  (Though the lines "Love will mean more after it's gone because/Peace after war makes that love strong" eerily remind me of a girl I dated who enjoyed fighting because she equated that with passion.)

I love the groove and energy of "Who Are You" (along with the horn, of course). Parts of this song remind me a bit of Phish, particularly when Clifton sings, "You've got to get up to get out, and you've got to get out to get in/And you've got to get in to get down to who you are/So who are you." It has that kind of fun vibe about it. There is also some really nice guitar work. This is my personal favorite track from this album, and I've already found myself singing it several times.

"Everyone's Running" is a really interesting song. An early line grabs me: "My mouth is a hole in the ground that I keep stepping in, keeps me from moving along." Of all the tracks, this is the one that lyrically speaks strongest to me. And even with lines like "Because I don't speak that language here/Now everything's wrong and I am just here sitting all alone," the song still has something of a positive feel (which I appreciate).

"Eyes In The Dark"

Give Me The Love Or Give Me The Fight concludes with "Eyes In The Dark," which has a quiet and pretty intro on guitar. And this time when the vocals come in, the song retains its simple and pretty structure. It isn't until just before the chorus that the tune gets louder, more powerful.  A little after the three-minute mark, the song seems to be ending, but then takes on a different, brighter feel, with some wonderful vocal work. The last vocal line sounds gorgeous, and that's how the album ends.

Blue James Band features Clifton Williams on vocals and guitar; Bryan Worley on bass; Liz Lawrence on sax, pedal steel and vocals; Valerie Taylor on keys; and Patrick Tiglao on drums.  The album was mixed by Scott Riebling (the bass player from Letters To Cleo).

Give Me The Love Or Give Me The Fight was released on September 25, 2012 through Chappy Payne Records.
Posted by Michael Doherty at 2:51 PM