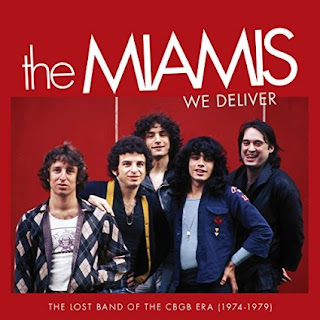 I knew nothing about The Miamis before popping in the new compilation disc, We Deliver: The Lost Band Of The CBGB Era (1974-1979). But what I found was a seriously fun combination of pop and punk sensibilities. Apparently this band was quite popular for its live shows in New York in the 1970s, but for some reason didn’t get the exposure beyond that market that it so clearly deserved. In the compilation’s liner notes, Glenn Coe explains, “Record companies of the time deemed The Miamis too punk for the pop market and too pop for punk.” They did record some tracks in the studio, however, and some of that is included here. Also included are several live tracks recorded at CBGB in April, 1978. Most of the tracks are original material, written by brothers James Wynbrandt and Thomas Wynbrandt. If you’re into bands like The Knack you should definitely give a listen to this disc. This music is a lot of fun, and there is a sense of humor about it too.  In “Just Too Many People (In The World),” they sing, “Every time that I go camping/I hear other people tramping/Through the forest God created for me/They’re looking under every tree/And I can’t help it, I just don’t like it/They never mean to get in my way/But there’s just so many of them today.” This is a song I expect I’ll be singing whenever I’m driving on the 405 freeway. And in the very catchy “Another Place, Another Time,” these lines make me laugh: “I’ll see you eat dirt/Don’t get it on your skirt.” In “Wang It,” they sing, “We’re going to have a whole lot of fun.” Indeed! It might be a few decades too late, but this band should be gaining a wider audience with the release of this CD.

This compilation kicks off with its title track, “We Deliver,” an energetic little pop gem that should get you bopping around like a delirious fool in the sunshine. There is also an alternate version included on this disc. “Cry Baby” is likewise a wonderful pop tune, with an early 1960s rock and roll influence, and a funny spoken word introduction (“I said, baby, the first time I saw you I knew it was love”). This is such a delightful song, and the instrumental section is perfect, making it one of the highlights of the disc. That is followed by “I Want A Girlfriend.” Oh yes, all of our dreams can come true if we just get that perfect girlfriend. In this pop world, that makes sense and seems true. There is also an alternate version of this tune, a much shorter demo.

“Dancin’ Together” is a ridiculously fun rock and roll tune about girls dancing together (“But when they started dancing, and the man said ‘Ladies’ choice’/Well, none of the girls would dance with the boys”). This should be enough to get you off your seat, and dancing around your apartment or car or wherever it is you’re listening to this disc. This is the kind of song that makes you want to dance with strangers, and maybe by the end of this album life will indeed be like a pop song, like a musical. Why not? This is one of my favorites.

“Let There Be Pain” is a strange and delightful song. In a way, it feels like a play on those early 1960s songs about teen heartache, and as such is quite funny. Here are a few lines that stand out: “For every heart that’s happy, make one that’s sad,” “’Cause now I find instead of you/All I’ve got is this pain/But I don’t care/Let it hurt, I hope it gets worse” and “I want to see a frown on every child.”

“We Need A Bigger Navy” is another silly one about getting a bigger navy to keep up with the Russians (sort of like keeping up with the Joneses?). There’s no better way to poke fun at warmongers than by adopting their position and singing a punk song from that perspective. And believe me, you’ll be singing along before long. “I don’t want to hear defense cuts/If that’s what you want, you gotta be nuts.” And from a pseudo-patriotic song this disc goes to a fake rah-rah-rah school fight song (“Fight Team Fight”), which is perfect. I love that the folks who put this CD together drew that parallel, even if it is rather obvious. The song interestingly then becomes about the band itself: “Like me and The Miamis/Now there’s a team/It’s one of the best/I think you know what I mean/And when we’re warming up and getting ready, we say/Oh let’s hit the stage and go all the way.”

The last nine tracks on this disc are live recordings from April of 1978 at CBGB. “Open Up Your Heart” is an energetic rock and roll tune. And there is a bit of stage banter before the insanely fun “Dada Mama” (one of the best titles ever, which art fans will certainly appreciate). From this track, I can totally understand why their live shows were so popular. As wonderful as that song is, I’m even more fond of “Détente (That’s What I Want),” mostly because it has lines that completely surprised me: “Let me wrap you in my nuclear arms/I need a love, a love that will last/Don’t blow me up in no holocaust” (with “holocaust” rhyming with “last”). And check out these lines: “I heard all about the Paris Accord/They only signed it ‘cause they all got so bored/But you and me, we’ve got a real U.N./Fight on the floor, and then we do it again.” Another fun tune is “Elvis, Groucho & Bing,” with lines like “Two of them sure could sing” and “Drugs, old age, a heart attack/I wish they’d come back.” There are also live versions of “We Need A Bigger Navy” (with an introduction that made me laugh), “Dancin’ Together,” “Wang It” and “Fight Team Fight.” The CD ends with a live rendition of “That’s Life,” the only cover song on this disc, and one made famous by Frank Sinatra. And they do a really good job with it.