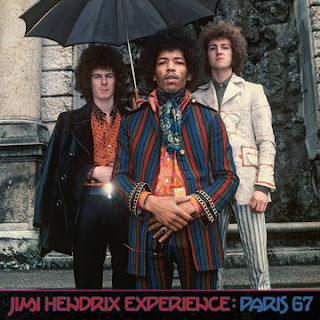 I used to do whatever it took to avoid Black Friday, when lunatics would work themselves into a frenzy over sales on electronics. It all seemed sad and frightening. But now, since the folks who bring us Record Store Day each year added Black Friday to the mix, I look forward to it. There are always some exciting new releases. This year they include a live album from Jimi Hendrix Experience, Paris 67, featuring music from the trio’s October 9th performance at the Olympia Theater (I’m not sure if it’s the full show, as an online set list site includes two more songs, “Burning Of The Midnight Lamp” and “Foxy Lady,” positioned between “Catfish Blues” and “The Wind Cries Mary”). Certainly, 1967 was an interesting year for Jimi Hendrix, with peaks and valleys (more peaks than valleys). He wowed the crowd at the Monterey Pop Festival and was booed when opening for The Monkees. Insane. He released Are You Experienced and Axis: Bold As Love that year. Between those two records, he played this show in Paris, the recording made for broadcast in France. And now it is being released on vinyl, and a beautiful deep blue vinyl at that.

The band’s introduction is just Jimi’s name shouted, and the crowd gets excited. What else is needed? The group jumps right into “Stone Free,” always one of my favorites. I used to blast this song in my teen years, its lyrics being particularly appealing to those of us who were trying to break through whatever boundaries had been set up for us. “Got to, got to, got to get away.” The energy is tremendous here, the song seeming to have its own force, which the band is both creating and riding upon. A great start to the show. There is then a bit of stage banter as “Hey Joe” is introduced, Jimi Hendrix dedicating it to everyone there. This version begins with a short guitar solo. This is a song I’ve always associated with Hendrix, for his is the first version I ever heard, but it was written by Billy Roberts and originally recorded by The Leaves. Here it gets a bit messy at the very end, perhaps, but is a good version. Jimi tells the crowd, “We have what you call an LP, you know,” referring to Are You Experienced, and joking a bit with the title. And they rip into “Fire,” which he calls “Let Me Stand Next To Your Fire.” Mitch Mitchell’s work on drums has always felt like the driving force behind this one, and I love his playing here.

Those first three songs they played would end up on Smash Hits, songs familiar to anyone with even a passing interesting in Jimi Hendrix. The group then follows those with a cover of “Catfish Blues.” In introducing it, Jimi asks the crowd: “Have you heard of Mississippi? Have you heard of Muddy Waters? How about John Lee Hooker?” He tells them they’re going to do this blues song their own way, and indeed, they deliver a powerful rendition. The band jams on it, and there is even a drum solo. It ends up being one of the record’s best tracks, though it feels like it ends prematurely. They then ease into “The Wind Cries Mary,” which has such a cool sound, with a really good vocal performance. Jimi Hendrix covered some Bob Dylan songs, and it seems to me that Dylan’s influence is heard in “The Wind Cries Mary.” I also love the work by Noel Redding on bass. The crowd is completely into it, and that’s how the first side of the record ends.

The second side opens with a cover of “Rock Me Baby,” in which Jimi sings, “Rock me, baby/Rock me all night long.” I’m sure the crowd wanted him to do just that, but sets were not all that long at that time. But he certainly rocked them with this song. The band is cooking here. There is a pause after that song, and you can hear folks shouting out stuff before Jimi introduces “Red House.” This is another delicious bit of blues, but one written by Hendrix. And here he lets loose on guitar, the band jamming. This track is another highlight of the record.

A bit of stage banter precedes “Purple Haze,” including Jimi announcing “I’m going to say something in French.” This one begins with some psychedelic, wild work on guitar, including a nod to the sound of a siren. When I was a kid, I was listening to a Jimi Hendrix tape, and this song came on. My mom was in the room, and she misheard the lyric as “Excuse me while I kiss this guy,” and was bothered by it. Apparently a lot of folks heard it that way. Maybe from the very beginning? For here Jimi clearly sings, “Excuse me while I kiss that guy.” He must have been playing on the misheard lyric. Crazy. Then Jimi Hendrix gets even more playful with a cover of “Wild Thing,” which wraps up the show. In his introduction, he encourages everyone in the audience to sing, even saying “Look at your ticket stub, it says you must sing the last song.” There is a bit of tuning before he begins it, and then they have fun with the song, allowing it to get a bit chaotic at the end.

Paris 67 is scheduled to be released on November 26, 2021 on Dagger Records. It is a limited edition of 13,200 copies (which is actually a lot for a Record Store Day release). 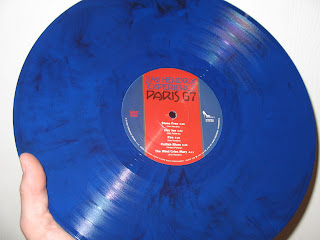 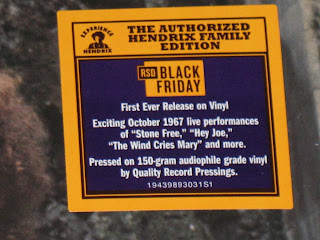 Posted by Michael Doherty at 9:57 AM