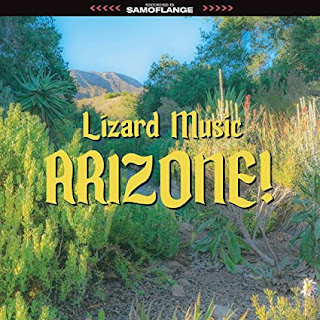 It’s been more than two decades since Lizard Music released an album, but it’s clear from the cover of Arizone! that the band has lost none of its sense of humor, none of its sense of play (these are the guys that sang “Ooh, baby baby, what you gonna do/You got your candy necklace strangling you”). The cover and album title calls to mind musicals, hinting at some sort of possibly exaggerated drama within. And the music is what you’d hope for from these guys. It is all original material, written by the band’s four members. The band is made up of Chris Apple on bass, trumpet and vocals; Mikael Jorgensen on keyboards, guitar and vocals; Erik Paparozzi on guitar, keyboards and vocals; and Craig Smith on drums, percussion and vocals. Mikael Jorgensen you likely know as the keyboardist for Wilco, while Erik Paparozzi performed on “Love’s What I Want” on The Monkees’ Good Times! Plus! (which was released in 2016).

The band welcomes us back with its opening track, “The Crow Flies,” its first line being “Welcome to ‘Choose Your Own Future, Man!’” Things get particularly interesting after the second stanza, an instrumental section drawing us into the band’s own peculiar realm, which seems to be part carnival, part stage show. But it is the song’s final stanza that is my favorite part of this song, showing their humor, and taking us back a few decades to the time of renting videotapes. “Here is your host, Mr. Blank Tape/Be kind, rewind, and demagnetize.” That’s followed by “The Mixtape,” which takes us back to that same period. The line that stands out for me (someone who has made dozens of mix tapes) is “I was impressed that it was a Maxell.” Back in the days of trading Grateful Dead concert tapes, the standard was Maxell XL II tapes (and if you were feeling particularly generous, you might use a Maxell XL II S), and so I ended up using those for all my mix tapes too. This song has more of a rock and roll vibe, and includes a reference to a Billy Idol song in its opening lines. The title of the third track, “Keystone Cops,” takes us back even further, though the sound is certainly not of that era. This is a fun, playful pop song. Could it usher in a new dance craze with the line “Everyone stop, drop and roll”? Perhaps if people are ablaze, but maybe even in less inflammatory circumstances.

The album’s title track is an unusual one that begins with some hesitation, odd starts and even a cough. And then it has something of a trippy vibe, and with some of the vocal work, you might be thinking of ‘60s bands. There are still more surprises, some sharp turns. Just ride with the track, wherever it may take you. “She can’t help it/She just can’t help it/In the Arizone.”  Neither can we. Wait, what are we talking about? Then with “Under The Table,” the vocals are the main focus, the work being rather pretty. And then it becomes a kind of dance number, with a slowed disco vibe. But it’s that short, but cool instrumental section halfway through that ends up being my favorite part of this track. That’s followed by “They Did Their Best,” a strangely sweet number about childhood. The lyrics about building a drum kit out of cardboard boxes stand out for me because I did that too, and I begged for a drum kit starting at age four. However, unlike the narrator of this song, my banging and begging eventually worked, after nine years (so don’t give up, kids). It’s interesting too how lately I’ve heard people say of their parents, “They did their best.” Things are moving more solidly into the past, aren’t they? “Then just like a photograph/Images and memories fade/Then just like a photograph/Only the feeling remains.”

“Comes And Goes” has a pretty instrumental intro. There are also some playful lines, like the reference to Stevie Wonder in the line “Little Stevie wonders why.” I can’t help but appreciate word play like that. And while they’re at it, there is this line: “Little Richard Penny Lane.” That’s followed by “Laughing In The Face Of Love,” its sound combining elements of folk and pop and drama, with some of the lyrics sung in Spanish. And then “What’s My Line?” begins with a reference to Sophia and Roman Coppola: “Just like Sophia and Roman/You gotta shadow the showman.” When I was visiting my family recently, we ended up watching bits of several horror movies on television (it was the month of Halloween after all), and one that seemed to be on every day was The Omen, which this song refers to in its lyrics. And I assume it is the Bergman film the band refers to in the line “Just like the girl from Persona.” And of course the track refers to the television program it is named after. “You Should Be Proud” uses a humorous spoken word delivery, and refers to those garbage cereals of our youth. And just before the end, there is a mention of Shakespeare. “All that Shakespeare shit?/It’s actually coming true.” Then in “Make That Drink To Go,” they sing “On with the show/What’s the name/Of this program?” Ah, yes, don’t we find ourselves asking that very question as we look around at our lives?

“Better Believe” has a dreamy vibe, which fits well with its lyrics. “Transmitting to the void/Shaking a Polaroid/Whatever it takes.”  Will we ever have the opportunity to shake a Polaroid again? To hell with Instagram; shaking a Polaroid and watching the image appear is the way to share photos with friends. This track has a rather comforting ending, with the repetition of the line “You better believe it’ll be all right.” Then in “In Jest” they sing “We’re all running to get our lives back offline.” Isn’t that an appealing notion? At some point, we begin to hear crickets. Then there is the line “Catch the cricket and you’ll see the light.” By the time that line comes around, we want someone to do just that, catch that cricket. There is a spoken word section that begins with these lines: “When my world’s through a screen/It’s time for a new scene.” This track ends with the sound of the cricket, so apparently it was not caught. Does that mean they didn’t see the light? “Impossible” also gets into the online aspect of our lives, the way computers have dramatically altered the way we think. “Can I delete my head?/Backspace my mind?/Autocorrect my feels?/Command Z my time?” And yeah, I had to look up what the hell Command Z does. (Apparently, it undoes your last action.) This one has an odd ending, and its last line is “I am going to take you for a ride.” That is how the vinyl version of this album wraps up. But the CD has one more track, “Naked In Las Vegas,” a strange and strangely pretty song that is sort of in the folk realm, with an easygoing, relaxed vibe.  “No one stops for a firetruck in New York.”

Arizone! was released on CD on October 8, 2021 through Omnivore Recordings, and is scheduled to be released on vinyl on December 10th.

Posted by Michael Doherty at 9:00 PM