Dead And Company at The Hollywood Bowl, 10-31-21 Concert Review 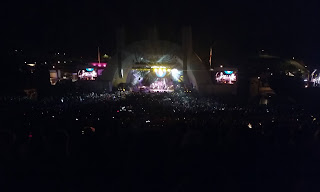 Halloween with the Dead, what a way to make the best holiday even better. Dead And Company wrapped up the three-night run at the Hollywood Bowl (and completed the fall 2021 tour) last night with a show that featured a lot of great jamming. This show had an earlier scheduled start time, 6:30 p.m., and so the doors were scheduled to open at 5 o’clock. Shockingly, the gates were opened right on time, something of a miracle in itself. But then the actual process of letting people in was much slower than it was on Friday (I didn’t attend the Saturday show, but heard it was slow then too). This was due in large part to having only one guy in charge of looking at bags, helping folks put their metal objects on the tiny trays and checking vaccination cards. On Friday, that was the work of three people. This guy was overly diligent, and wanted to see what I had in my pockets too. If he was going to keep that shit up, half the crowd would miss the first set. But maybe I just picked the wrong line. At 6 p.m., the place was maybe a third full, but by 6:30 it was at least two thirds full. And we played the usual game of guessing what the opening number would be. My guess was “Hell In A Bucket.” Theresa guessed “Touch Of Grey.” A guy near me guessed “Dire Wolf.” “Dire Wolf” kept popping up as people’s guesses at the Friday show too. While waiting in line for the gates to open, I saw a woman with a wolf cap, and that made me think perhaps they would start the show with it. Why not?

But we were all wrong (though all three of those songs would appear in the first set). At 6:41, the lights went out and the band surprised everyone by starting the show with “Samson And Delilah,” a song that we are used to hearing in the second set. They began with the groove, and the song initially had slightly less power than usual, but had a cool vibe. The jam felt kind of bluesy. And someone near me popped a balloon at the exact right moment, eliciting some laughter from our section. “Samson And Delilah” led directly into “Uncle John’s Band,” another song that is normally played in the second set, and a good indication that the band was ready to deliver, that they were going for it. And why not? Last show of the tour. The jam between verses had a nice, relaxed feel. “Whoa-oh, what I want to know, where does the time go?” I wonder that often, but at this show, time didn’t matter. We were all still there, still celebrating with some of the best music of our lives, and living within those moments. The jam went into some interesting places, taking on a trippy journey, and then suddenly took off, rocking with a jazzy energy before easing back to those final lines. That was followed by “Brown-Eyed Women,” which seemed to have even more of an impact on the crowd, getting folks singing along. I was especially digging Jeff Chimenti’s work on keys. There was a bit of funk in there somewhere. Then John Mayer totally delivered on guitar. “Touch Of Grey” followed, with Bob Weir and John Mayer trading lines. This is a song we all need to return to at times, for the reminder that we will get by.

Then we got “Dire Wolf.” Perhaps it was the woman in the wolf hat that made this one happen. Perhaps not. Either way, it was a fun rendition. The band then started a little jam, and at first it was unclear which song they were beginning with that groove, but then Bob signaled the others (and us), and the song was suddenly familiar, even as that groove continued. And soon we were into “Hell In A Bucket.” And, yeah, you can be sure we were all enjoying the ride. Let’s hope it continues for a while. It was during that song that I glanced up at one of the screens and noticed that Bill Kreutzmann was not on stage. It was Jay Lane drumming with Mickey Hart. Apparently, Bill Kreutzmann had left the stage partway through the second set the previous night, and was not feeling good last night either. He had also missed a few shows in Colorado earlier in the tour. Not a good sign. But now he’ll have a chance to rest for a while, for the next scheduled shows aren’t until January. They played with the rhythm of “Hell In A Bucket” near the end, taking the song in a different direction, and then even sort of broke it down, at which point it got kind of bluesy. They wrapped up the first set with “Terrapin Station,” another song that is usually placed in the second set. The jam had a loose, sweet vibe, as we were guided gently into the outer and inner realms. It was a really enjoyable rendition. The first ended at 7:53 p.m.

Someone had the brilliant idea to lock up the bathrooms on our level during the set break, and so everyone had to go down to the next level, where the line was crazy. Getting back up the stairs proved even more challenging, as more people were still coming down, and no one had any space to move. The bathrooms are too small anyway to accommodate such a large crowd, and closing one set of bathrooms created more trouble. But most people managed to get back to their seats by the time the second set started at 8:35 p.m. The second set opener was no surprise. It was “Althea,” the song that got John Mayer interested in the Grateful Dead. He wasn’t going to let too many opportunities pass without playing this one, and, perhaps because this song is important to him, Dead And Company delivered a really good version. And John added more emphasis to the line “I was born to be a bachelor.” The band followed that with “Dark Star,” a song many of us were expecting and hoping for. It eased in with a delicate jam, which then soon deepened and expanded, and that was before we even really got to the main theme. The music at times sounded like rain streaming through the leaves of tall trees in some enchanted jungle. Yes, it was time for some traveling to realms that seem to be waiting for us, welcoming us when we arrive, embracing us. And this star had a throat, an eager maw, and we were swallowed by light. That led straight into “El Paso,” and what an interesting transition. It was a slower, more fanciful rendition. We used to dance to this one, now we sway. And then we were back within “Dark Star,” because that journey was not over, even after a sojourn in El Paso. Toward the end, Bob Weir repeated “Nightfall” in a pretty section.

“Eyes Of The World” is one I am always happy to hear. It never fails to lift spirits and get folks dancing. And this rendition included a nice section in the jam, a conversation between John Mayer’s guitar and Jeff Chimenti’s keyboards. And it built up and built up, leading to the final verse. As it was ending, both drummers left the stage, and so there was a brief “Space”-type jam before the drummers returned for “Drums.” And now Mickey was in costume, dressed as a devil. It seemed he was on his own for the first part of “Drums,” taking us immediately to another world. But soon Jay Lane and Oteil Burbridge were with him, all three in red horns and capes, demons pounding the skins, and a dance beat emerged. From there, things developed, and a monster’s heartbeat pulsed within the hill. The vibe became tribal before the sounds drifted off into stranger lands, with Mickey Hart seeming to be alone again, taking us farther out into space and also home. Even in the darkness, we were surrounded by angels, pixies and sprites, though the dark machinery hummed and thumped in my ears, thick and strong. But no, Jay Lane was beside Mickey again. That led to a short “Space,” a gentle and surprisingly structured piece which soon developed into “Scarlet Begonias,” continuing that gentle feel, but with a groove that made everyone happy. This was a totally delicious “Scarlet Begonias,” with a good deal of energy, and it eventually eased into “Fire On The Mountain,” with Oteil Burbridge on lead vocals. That was followed by “Morning Dew,” and the moment the band started diving into it, the crowd seemed to signal that it was ready. Everything sounded so good, and there was a joy when the music burst through in a glorious bolt. That led directly into a reprise of “Not Fade Away” (the song had been begun the previous night). The band then ended the show with “Brokedown Palace.” It seemed that this was intended as the encore, though the band didn’t actually leave the stage before playing it. My guess is it had to do with time, for the show ended at 10:28 p.m. They must have had a 10:30 shutdown time, and decided to just go right into what would have been the encore. I had been hoping for a “Brokedown Palace” encore. It’s a beautiful song, and it’s so fitting for the last song of a tour, but I was also fairly sure we’d get a “Werewolves Of London.” It was Halloween, after all.  Had it been planned, and scrapped because of time? But even without “Werewolves,” it was an excellent show. 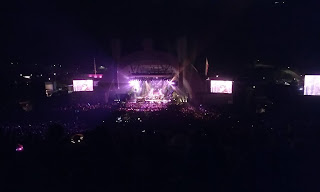 Posted by Michael Doherty at 1:49 PM