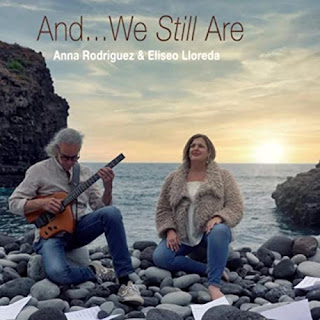 The duo of Anna Rodriguez and Eliseo Lloreda put out their first album together, What We Are, a decade ago. And now they’ve followed it with the appropriately titled And… We Still Are. While their first album featured jazz and pop covers, including a really nice rendition of Cyndi Lauper’s “Time After Time,” this disc features original material, with both of them contributing songs. As with their first album, they perform these songs without any backing band. And none is needed. Anna’s voice and Eliseo’s guitar are enough to draw us in, and to transport us. The music is beautiful, honest, intimate.

The album opens with “Irresistible,” which begins with some solo guitar work from Eliseo Lloreda, and takes on a good rhythm just as Anna’s voice comes in, telling us “Irresistible, unforgettable, undeniable/That’s what I am for you.” That is some serious confidence. And why not? There is something undeniably sexy and appealing about her voice, and about that attitude. Besides, it’s a cool-sounding song, which certainly helps. “There’s no other woman who will get you like I do/Ain’t no nobody else here that you desire/I’m the only woman you can give your heart to/I’m the one who makes you feel alive.” I can’t help but think about my girlfriend while listening to this track, and hear the truth in these lines. This one was written by Anna Rodriguez. That’s followed by “Seselombre” which likewise begins with some solo guitar work. When Anna comes in, it is to provide a sweet type of scat. There are no lyrics to this one. The tune has a warm and welcoming feel, like a sunrise. Toward the end there is another section of just guitar. “Seselombre” was composed by Eliseo Lloreda.

“Sandra Number 5” has a mellower, gentle opening on guitar. And Anna’s vocal work has a sweet and loving air. “And I just want to be with you always/This love is what I dreamed/So many days.” And as I mentioned, because there is no band backing them, the music feels more intimate. The song itself feels like a romantic and cheerful dance between two people, with the rest of the world fading away into irrelevance. Then “Meu Coração” takes place on the other side of a relationship, with the decision made to end it. “I want me back the way I was before/Won’t wait around no more/I’m sorry/I’m through with waiting for my life to change/I’m going to rearrange/I’m leaving/So turn around and find another dame/With whom to play your games.” The line that especially stands out for me is “I want me back the way I was before.” All relationships change us in some way, and most of us have had friends whose relationships have changed them for the worse. Is it possible to get back to who we once were? This song was written by Anna Rodriguez.

“Tanoji” was composed by Eliseo Lloreda and begins with some beautiful work on guitar. This is music that transports you, and it seems it could take you farther in, or to a new place entirely, depending on your mood, for there is something contemplative about it. There are also some interesting changes throughout. The track is instrumental for the first half, and then Anna comes in when the music has become more steady, less gentle, less introspective, delivering some scat. The tone then becomes more serious, even tense, like something is building up underneath, ready to break through, putting us on edge. That section comes to a sudden end when Anna returns just before the end. The music turns more romantic with “Crazy Mad,” written by Anna Rodriguez. This features one of the best vocal performances of the album. “When I am with you, I become music” is such an interesting line, particularly as we almost become part of the relationship, the equation, by owning the album, by listening to the music. Has she in fact become music? For us, yes. How are we to know otherwise?

“Ausencia” features lyrics by Luis Almeida, which are sung in Spanish, and music by Eliseo Lloreda. Eliseo Lloreda begins it with some pretty work on guitar, and it is more than a minute before Anna Rodriguez comes in. There is something kind of dreamlike about her vocal work at times. The album then concludes with “Seven Years,” with some bluesy guitar work establishing the mood. When we think of seven years in a relationship, we may think of the seven year itch, but here it seems the problems began in the first year. Anna is direct, not holding back, the first lines being “Seven years of misery/Seven years of pain/For seven years you lied to me.” And she repeats, “Get out of my life.” Couldn’t be any clearer. This one has another of the album’s best vocal performances. Anna is totally into it, delivering a completely delicious performance. “I realize you never loved me/‘Cause you don’t know how.” Time passes during the song, while we are treated to a guitar solo, with Anna then updating us on her life. And, guess what, everything is now perfect. “I love my life now, baby.”