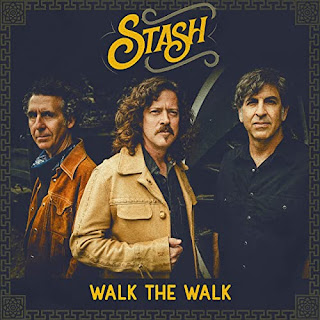 The pandemic hasn’t seemed to slow Ted Russell Kamp’s work. In early May of this year he released Solitaire, an album mostly recorded in his home. And now Stash, a band founded by Kamp, Rich McCulley and Joey Peters, is releasing its first album. Titled Walk The Walk, this disc features all original material, written by the band members. Ted Russell Kamp plays bass, acoustic guitar, banjo, organ, trumpet and trombone on these tracks, and also provides the lead vocals. Rich McCulley plays electric guitar, baritone guitar, acoustic guitar, dobro, mandolin and keyboards, and provides backing vocals. Joey Peters plays drums, percussion and keyboards. The album was created in the home studios of the musicians, a project that helped them get through the period of isolation brought on by the pandemic. And the music should help the rest of us get through the remaining stages of this thing. Several of these songs are, in one way or another, about being on the road, something musicians missed as venues shut down and tours were canceled. Now, as things are opening up again, people are heading back out into the world. This is an album to take with you.

The album opens with “Smoke And Mirrors,” which seems to describe a large portion of our reality these days. After all, many politicians and others haunting the internet are peddling snake oil. These lines certainly seem to speak to our times: “It’s a sleight-of-hand, so don’t act surprised/When good goes bad right before your eyes/The more you see, the less it’s clear/You can’t believe a word that you hear/It’s smoke and mirrors.” A steady, pounding beat moves this wonderfully raw number forward. Then “Catch Me If You Can” has more of a rock vibe. “Got the world in the palm of my hand/The open road and the big blue sky/Catch me if you can.” Ah, the open road has always held great appeal, and these days it sounds like heaven. This has a classic vibe, a song of summer, its energy and style taking me back to some of the music I listened to when I was growing up. It has that same sort of draw. That’s followed by another song of the road, this one a fun country number titled “Queen Of The Highway.” Here is a taste of the lyrics: “She lives by the white line/And she knows every road sign/It’s a hundred miles to where she wants to  be/That woman loves the highway more than me.” He clearly admires her, which helps to make the song completely enjoyable.

“You’re The One” begins with a strong rhythm, a cool bass line, for a moment nearly straying into The Knack territory, which is fine with me. This is a totally fun song, another that feels like summer, with that sense of happiness, of cruising at the beach, of meeting that special someone. Because, hey, in addition to being a catchy tune, it’s a love song. What more could you want? “Into The Sunset” is also a love song, but with a sweeter, gentler vibe, including some nice work on mandolin. And you can hear the affection in the delivery of lines like “And I woke up dreaming that I was still holding you tight” and “Your touch is as soft as the rain.” So nice. They then return to a more raw, driving style with “One Step Ahead Of The Law,” fitting for the story of an outlaw. And that vocal approach is perfect. This one too refers to the road, and even includes the title of an earlier track in its lyrics: “I’ve got my eye on the prize and my foot on the gas/Catch me if you can because I’m a man with no past.”

“One Track Mind” moves at a good clip, with a rock energy. “I’ll get up and do it again ‘til I stumble and fall/Because you can fool me once, give me bad advice/But I know the name of the game and you won’t fool me twice.” Then “Ain’t That Kind Of Man” tells the story of poverty and necessity leading to a desperate decision. “It was just one mistake/I ain’t that kind of man/No, I ain’t that kind of man.” It’s a compelling song, and here we get a taste of the horns too. That’s followed by “Talk The Talk,” a fun track that features guest vocals from Anna Maria Rosales, as well as more good stuff on horns. There is even a section in the middle with hand claps. “But time is slipping away/Don’t want to waste another day.” Like a lot of folks, I thought about priorities during the pandemic, and lines like those stand out for that reason. Our time here is so brief.

“Sweet Salvation Of The Dawn” is another song about an outlaw, and one who stands by his choice, told from his perspective. “I can’t go back/What’s done is done/I’ve got to make it across the border/Before the morning comes.” That’s followed by “What I Need,” a rocking, energetic number. “I’m going to stand on top of the world.” I think many people feel that need. Then “By Your Side” is a sweet-sounding song that has a certain innocence about it, a youthful vibe, a nostalgic vibe. “But when I’m alone, I get lost in an ocean of dreams/Every sunset seems like the last I will see/When I’m by your side, I feel the warmth of the sun.” The album concludes with a fun rocking song, “Hey, Hey, Hey,” a song that will get you smiling, and maybe dancing. Check out that rock and roll lead on guitar in the second half.

Walk The Walk is scheduled to be released on November 5, 2021.

Posted by Michael Doherty at 1:08 PM