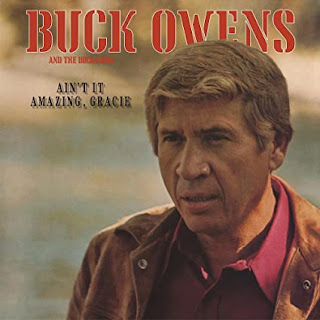 Buck Owens was fairly busy in 1973, putting out four albums that year.  Ain’t It Amazing, Gracie was released just a few months after In The Palm Of Your Hand, and featured mostly original material written or co-written by Buck Owens. It also contains the song “Streets Of Bakersfield,” which was written by Homer Joy, and was later a hit when Buck Owens re-recorded it with Dwight Yoakam in 1988. Randy Poe, in the new liner notes written for this re-issue, talks a bit about that later recording. This re-issue also includes the original liner notes, but no bonus tracks. The songs are presented in their original configuration, and the music has been mastered by Michael Graves from the original analog tapes. The band includes Don Rich on guitar, fiddle and backing vocals; Jerry Brightman on steel guitar; Doyle Curtsinger on bass and backing vocals; Jerry Wiggins on drums; and Jim Shaw on keyboards.

Ain’t It Amazing, Gracie opens with its title track, which was written by Buck Owens and Glen Garrison. It was also released as a single, the only single from this album. It’s a fun song, the title obviously a play on “Amazing Grace.” It’s also a love song, but slightly insulting as well, as we hear in these lines: “Well, she’s not the prettiest girl in the world/I know she’s not the smartest one too/But she’s always fair, and I know she cares/And I know her little heart is true/Well, ain’t it amazing, Gracie, how much that I love you.” There is something about that last line that makes me think she doesn’t deserve love, that that’s why it’s amazing he loves her so much. “It’s going to be a long hot summer,” Buck Owens sings at the beginning of the next track, “Long Hot Summer,” something that is always true here in Los Angeles. But of course with climate change, I suppose people can expect that wherever they might be. This is a slower number, and it includes a spoken word section: “Well, you say that you’re leaving/And that you ain’t coming back/And from the way things are looking/I don’t doubt it/Not one little bit.”

The story behind “Streets Of Bakersfield” is included in the liner notes of this new re-issue. When you think of the so-called Bakersfield sound, the first name that likely comes to mind is Buck Owens, so it still strikes me as strange that he didn’t write this song himself. But, no matter, it’s a good song. The lines I’ve always loved are: “You don’t know me, but you don’t like me/You say you care less how I feel.” This song was written by Homer Joy, who also released his own version as a single. It’s followed by a second song written by Homer Joy, “She’s Had All The Dreamin’ She Can Stand,” which obviously is the best song title on this album, and it’s one of the best songs. Check out these lines: “Chased our dreams endlessly/Through it all she stood by me/More than that, lord, she was such a friend/Dreaming’s all I had to give/She needed more to live/She’s had all the dreamin’ she can stand.” Such beautiful and sad lines, as are these: “But one by one, the dreams all died/And late at night I’d hear her cry.” These lyrics remind me of what could be the most depressing lines ever in a song: “For you will still be here tomorrow/But your dreams may not,” those from Cat Stevens’ “Father And Son.” I also love that work on fiddle on this track. “She’s Had All The Dreamin’ She Can Stand” is followed by “Your Monkey Won’t Be Home Tonight.” And yes, this one also has a great title. It’s a song about getting away from a woman who’s been treating him as some sort of pet or plaything. “You’ll find me strutting my stuff/Yes, I’ll be cutting the rug/Don’t wait up, because your monkey won’t be home tonight.” And how can anyone help but enjoy the line “Well, I may do some swinging, but it won’t be from a tree.”

“I Know That You Know (That I Love You)” is kind of silly, kind of sweet, and kind of sad. “You don’t have a care, and I don’t have a prayer/And I know that you know that I care.” I love the vocals on this track, including the backing vocals, which add some weight to the line “And I know that you know that I care.” That’s followed by “The Good Old Days (Are Here Again).” Here is a taste of the lyrics: “She’ll soon be back within my arms/Yes, back where she belongs/The lonely nights are gone for good/Like castles in the air.” This track features some really nice work on guitar and pedal steel. That change that first happens nearly halfway through always catches me by surprise, that section about the train, and I love it. It is what especially makes this song stand out. “Old Faithful” is another of the disc’s highlights, Buck Owens getting rather playful in this number about trying to finally end a relationship. “I’ve said this was the last time a hundred times before/And the next time that you called, I’d tell you off/I’ve promised me the luxury of showing you the door/Oh, I could hardly wait ‘til I could tell you to get lost.” But the song’s title ought to give you a clue about his success.

“When You Get Back From Nashville” was written by Bob Morris and Buck Owens. Today the sentence would be completed as “When you get back from Nashville, you’ll have to quarantine for two weeks.” Though I love Nashville (I had the best pancakes there), it’s just not a good idea to visit any of the so-called red states these days, not until they manage to wean their residents off of FOX News and get them vaccinated. Anyway, this is a sweet song about a musician returning home. It’s a song of love and support, and it features some wonderful backing vocals from The Ray Sisters. “So, darling, come home/And sing us your songs/‘Cause you’ll always be famous with me.” The album then concludes with “When You Get To Heaven (I’ll Be There),” which is a variation on the theme Buck Owens visited previously in “Sweethearts In Heaven,” and contains quite similar lyrics. Check out these lines: “Just inside the pearly gates/Darling, that’s where I’ll wait/When you get to heaven, I’ll be there/If I should go first and have to leave you/To face this life alone with all its cares/Darling, don’t forget you’ll find me waiting/To help you climb up heaven’s golden stairs.” Compare those to these lines from “Sweethearts In Heaven”: “If I should go first and leave you behind/To face life alone, bear this in mind/I’ll be waiting if heaven’s my fate/To take you by the hand just inside the pearly gates.”

This re-issue of Ain’t It Amazing, Gracie was scheduled to be released on October 1, 2021 through Omnivore Recordings, but it looks like that date was pushed back to October 29th.