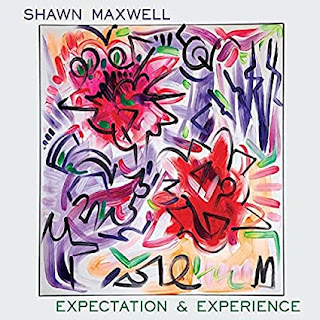 For many people, the pandemic has been, at least partially, a period of both introspection and reaching out to those important to us, through whatever means were available. A time to evaluate priorities, and possibly to make changes. Shawn Maxwell has clearly used the time to assess the strange world around him and to respond to it in music. His new album, Expectation & Experience, features all original compositions, written and recorded during the pandemic. On this release, he plays alto saxophone, soprano saxophone and clarinet, and is joined – remotely, of course – by several other musicians, the players changing from track to track. A glance at the track list will tell you that the music touches upon many of the troubles that have faced us in the last few years, not limited to the pandemic itself.

The album opens with “Expectation,” a short piece that feels like a door opening, like facing possibilities. There is both contemplation and curiosity expressed in the sound. Here Shawn Maxwell is joined by Stephen Lynerd on vibraphone. Then we get more of a full band sound with “J.C. Jones,” with that strong pulse on bass. That’s Michael Barton on bass, and Phil Beale is on drums. This is a tune of joy and determination. It was written for James Calvin Jones, and features some wonderful work by Marielle de Rocca Serra on violin. It is followed by “Empty Shelf.” The first thing I had trouble finding was hand sanitizer, in early March of 2020, but I wasn’t overly concerned. But when the shelves were bare of water, of toilet paper, the situation became more worrisome. Interestingly, there is a sort of magical, otherworldly sound and sense to this track. It did feel like another world at times, didn’t it? The world being an unfamiliar place. What was even more discouraging was that we were hesitant to travel out at all, and then when we did, we weren’t able to get what we needed, all the while trying to keep a distance from anyone else on a similar excursion. The opening work on keyboards by Collin Clauson sets up this strange world, and then Shawn Maxwell’s work seems to speak for our experience, though is perhaps a lot calmer than many of us were. Tim Seisser provides some nice work on bass, and Clauson gets a chance to lead on keys.

“Quiet House” provides a more soothing place for us to settle after dealing with the world, a place apart, where perhaps we can forget the troubles outside for a time. This track features some excellent, expressive work on guitar by Zvonimir Tot. Then Shawn Maxwell’s saxophone soars and moves, raising its voice at moments as if to bring down answers from the heavens, other times gently reaching out to those around as if to say things will be okay. Marc Piane is on bass, and Lucas Gillan is on drums. This is one of my personal favorites. That’s followed by “The Great Divide.” If you were to choose one word to describe this country for the last five years, “divided” might be the first to come to mind. This track expresses that divide with two saxophones at odds with each other, speaking simultaneously if not together. Alex Beltran is on tenor saxophone. One thing that is interesting is at times you might find yourself following one or the other voice here, with the other fading into the background in your mind, but then intruding, mimicking our experience in following the news. Every day it seems the divide is becoming greater.

“Feeling Remote” has something of an unsettling energy, an anxiety, a concern for how to proceed in a suddenly unfamiliar and frightening world. But there is no question of not proceeding, of holding back. Here Shawn Maxwell is joined by Kalyan Pathak on percussion. I particularly love that work on tabla. After that lead on percussion, as Shawn Maxwell returns, at first there is a somewhat calmer sense, a sense of having just a bit of control. Then, as it builds to its conclusion, the track takes on more nervous energy again. That’s followed by a mellower number, “Breathe,” a piece that is more mournful and reflective, with Brenda Earle Stokes joining on piano. So much has happened in the last couple of years, and as the pandemic was getting out of control, so were the police. George Floyd’s murder by police officer Derek Chauvin brought much of the country together in protest. Will there be any lasting change because of it? Another major issue facing us is climate change, and not enough is being done to address that either. “A Change Of Climate” is short piece featuring Paul Abella on cajon and tambourine.

Back in 2017, that insane cackling lizard Kellyanne Conway, the creature who invented the Bowling Green Massacre, introduced a whole new way of lying while defending the befuddled twit Sean Spicer and their mendacious overlord Donald Trump, that being alternative facts. Shawn Maxwell’s “Alternative Facts” is a playful look at the altered sense of reality created and promoted by that blond garbage bin, and it is a lot more fun than listening to either Conway or Spicer ever was. Howard Levy provides a great second voice on harmonica, interacting with Shawn Maxwell. Steven Hashimoto is on bass, and Greg Essig is on drums. That’s followed by “Every Day Is Monday,” featuring Mark Nelson on keyboards. This one feels like that world we found ourselves trapped in for a long period, when we were mostly within our own heads, sad, frustrated, worried, lonely, with images on our televisions and computers the only things marking the time. Then we have “No Peace Without Justice,” the album’s only track to feature vocals, which are provided by John Stafford II and Keri Johnsrud. This is a gentle and also uplifting piece inspired by the Black Lives Matter movement, featuring some absolutely beautiful and vibrant work from Shawn Maxwell, his playing at times combining with the voices to create one stronger, brighter voice.

“The Show Can’t Go On” is a track all musicians can relate to. We heard the story from musicians of all types, that moment when they learned that their gigs were canceled, the rush of anxiety for how they’d be able to pay their bills, feed their families. Everything was thrown off balance in that moment, their worlds dipping into chaos, but a chaos shared by everyone else and so somehow manageable. Here Shawn Maxwell has a conversation with himself, which is totally fitting for the subject, for a time when musicians couldn’t get together. Ernie Adams plays drums on this track. The cancellation of concerts led of course to empty, shuttered venues, and “Empty Space,” a solo piece by Shawn Maxwell, expresses that. Stages and clubs with a lonesome atmosphere, hollow spaces awaiting the return of a beat, of people, of dancing, of joy.

As everyone struggled without work, the politicians argued about how to help, or even if they should help, all those who suddenly found themselves without work, without a paycheck. The solution was to send people six hundred dollars. That helped, but wasn’t really an answer, and that money was soon gone, while the problem remained. “Six Hundred” is about that, and it features Chad McCullough on trumpet, William Kurk on keyboards, and Tom Sharpe on drums. That’s followed by “Lockdown.” Having to stay at home was such an odd experience, and it gave us a new look at our immediate surroundings, leading many to seek changes – little, or big, improvements, and art projects around the home. There was a lot of stress, but also light, fanciful moments, as expressed here by Shawn Maxwell, and by Gina DeGregorio on marimba.

By now we are used to wearing masks, to refraining from shaking hands with people we meet, to carrying hand sanitizer and disinfectant wipes, to giving a wide berth to strangers. It is “The New Abnormal,” as Shawn Maxwell expresses here. And, difficult as it was, we became used to getting all our concerts online. I am thankful that was even possible, for a world without concerts is a world I have no interest in. Plus, it was great that musicians were able to find another way to reach their audiences and make enough money to pay their bills. And so, while this track starts off rather slowly, hesitantly, it soon develops its own joy, as if out of necessity. Matt Nelson is on keyboards, Jeremiah Hunt is on bass, and Greg Artry is on drums. The album then concludes with “Experience,” a look back at what has happened, a way of taking it all in and making some sense of it, with an eye to the future as well, to carrying on, using whatever lessons have been learned. This short piece features Stacy McMichael on bass.

Expectation & Experience was released on May 21, 2021 on Cora Street Records in association with Jazzline.

Posted by Michael Doherty at 11:27 AM