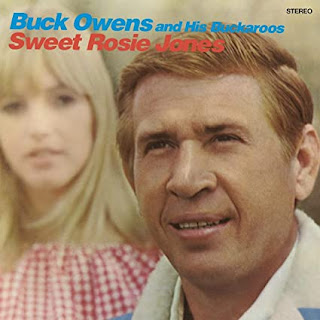 In these strange and often infuriating times, I’ll take an album that has some form of the word “happy” in the titles of both its opening and closing numbers. Omnivore Recordings has been re-issuing much of Buck Owens’ work from the late 1960s and early 1970s, including Sweet Rosie Jones, which was originally released in 1968. The album contains mostly original material, written or co-written by Buck Owens. The band backing him here includes Don Rich on guitar, fiddle and backing vocals; Doyle Holly on guitar; Tom Brumley on steel guitar and dobro; Bob Morris on bass; Jerry Wiggins on drums and tambourine; and Willie Cantu on drums and tambourine. There are also some guests playing on various tracks. The songs are in their original configuration, without bonus tracks, but the disc does include new liner notes from Randy Poe (as well as the original liner notes). It was mastered by Michael Graves at Osiris Studio in Los Angeles.

The album opens with “Hello Happiness, Goodbye Loneliness,” a fast-paced gem written by Buck Owens. This is a song in which he celebrates his girl’s imminent return. “No more sadness/Only gladness/My little darling’s coming home tonight.” Anyone who has spent extended time apart from his or her love knows just the sort of happiness Buck is singing about here. “Bad times are a-going to go/And the good times are a-going to roll.” Yes, we have to keep that in mind during these troubled times. I mean, if we are with the ones we love, they aren’t such terrible times, right? That’s followed by the album’s title track, “Sweet Rosie Jones,” which indeed has a sweet and mellow vibe, and features some good work on guitar. Though the joy he sings of is all in the past. “And in her eyes, I saw big trouble/Like the muddy waters down below/Her lips were soft and sweet as honey/Her hair was bright as yellow gold/Her cheeks were red as summer roses/She was my sweet, sweet Rosie Jones.” This song has one of those wonderful spoken word sections, spelling impending doom for the song’s narrator. This song reached #2 on the country chart.

“If I Had Three Wishes” is a fun, cheerful number written by Buck Owens and Don Rich. I love that work on fiddle. There is also some wonderful work on steel guitar, as well as a catchy bass line, helping to make this one of my favorite tracks. “Well, I wish I may and I wish I might have my wish come true/For if I had three wishes, I would wish ‘em all for you.” That’s followed by a cover of Merle Haggard’s “Swingin’ Doors,” a song from Merle’s 1966 album Swinging Doors And The Bottle Let Me Down (where it is listed as “Swinging Doors”). Buck Owens delivers an excellent rendition, his voice digging into that great sad country sound, and I love that guitar work. “I’ve got everything I need to drive me crazy/I’ve got everything it takes to lose my mind/And in here the atmosphere is just right for heartaches/Thanks to you, I’m always here at closing time.” Then “You’ll Never Miss The Water (Till The Well Runs Dry)” is a song about leaving a faithless woman. “You’ll regret each and every time you’ve made me cry/You’ll never miss me, darling, ‘til I say goodbye/Oh, you’ll never miss the water ‘til the well runs dry.”

“Sally, Mary, And Jerry” is a song about how rumors can damage a relationship, but it’s a playful number. “Sally told Mary/And Mary told Jerry/Jerry’s a-spreading it around/That we had a quarrel/A foolish quarrel/Now we’re the talk of the town.” Now he has to convince his woman that he loves her. It’s a short song, less than two minutes. That’s followed by another of the album’s highlights, “How Long Will My Baby Be Gone,” in which Buck Owens asks, “How long is forever?/How soon is now or never?/How long will these heartaches linger on/And how long will my baby be gone?” There are hand claps in the middle of that last line, a delightful touch. This song was released as a single, and reached #1 on the country chart.

“Leave Me Something To Remember You By” is a slow, sad song written by Buck Owens and Don Rich. Here is a taste of the lyrics: “Leave me a memory that we once shared/Leave me the twinkle in your eye/Leave me something to remember you by/Leave me a kiss as you walk out the door/For you know and I know you won’t be back no more.” I love these sad country songs about the end of a relationship. Earl Poole Ball plays piano. “The Heartaches Have Just Started” also tells of the end of a relationship, but it has more of a fun, lively vibe. “It’s a wonder I’m still living after all you’ve put me through/It would take a modern miracle to make things turn out right/The loneliness is here, and happiness is out of sight.” Ah, it’s the opposite of this album’s first track. It features some wonderful work on guitar. “But the best I had to offer wasn’t good enough for you.” That’s followed by “Everybody Needs Somebody,” a pleasant, easy-going tune written by Buck Owen and Don Rich. “Everybody needs somebody/And, darling, this somebody just needs you.”

“The Girl On Sugar Pie Lane” is a light, enjoyable song. It was written by Tommy Collins, and included on the 1966 album The Dynamic Tommy Collins. Buck Owens does a good job with it. The album then concludes with “Happy Times Are Here Again.” And, as in the album’s opening track, the happiness is caused by the return of his love. This song has a delightfully cheerful vibe. And I still can’t keep from thinking of Bruce Willis in The Last Boy Scout when I hear a line about dancing a jig, as Buck Owens sings here, “Gonna dance a jig all over the place/Happy times are here again.”

This re-issue of Sweet Rosie Jones was released on August 6, 2021 through Omnivore Recordings.

Posted by Michael Doherty at 9:45 AM