Ellis Paul at The Center For Arts In Natick, 10-16-21 Concert Review 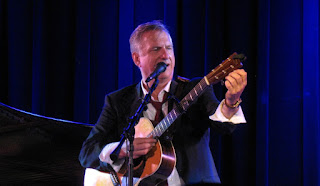 Ellis Paul has been playing online shows fairly regularly since the pandemic began, and his music has certainly helped a lot of folks get through the tough days. But online performances still pale in comparison to a live show, so when several months ago Ellis Paul announced he’d booked a concert in Massachusetts, I planned a trip east around it. It was only my second indoor concert since March of 2020, and as with the first (Pink Martini), everyone who attended had to show his or her vaccination card at the door and wear masks throughout the performance, so we all felt relatively safe. In addition to checking our vaccination cards, the woman at the door asked us for an update on the Red Sox game (the Sox were winning).

Laurie MacAllister opened the show just after 8 p.m. with a short set that began with a wonderful cover of “We Belong” (a song co-written by Dan Navarro, who has played on some of Ellis Paul’s online shows), and also included an absolutely beautiful rendition of Ellis Paul’s “She Was.” It’s unusual for someone who is opening to play a song from the headliner’s repertoire, but Laurie MacAllister and Ellis Paul are a couple, so you can be sure it was discussed beforehand. Laurie also talked a bit about the New England Songwriters Retreat, which she and Ellis run. Her set was approximately thirty minutes, and after a short break, Ellis Paul took the stage at 8:54 p.m., opening with what is probably his best song, “Maria’s Beautiful Mess,” from The Speed Of Trees.  And from his expression and his delivery, the line “Bringing up better times” seemed to hit home with him as well as with us in the audience. We’ve all been looking to music to do that for us, especially in the last few years. And at the end of the song, the crowd responded with joyful and enthusiastic applause. Ellis exclaimed, “Holy shit, that felt great!” He then added, “There are people in the room with me.” He told the audience that the next song was a sing-along, but that because of the masks he wouldn’t be able to tell who was participating and who wasn’t. That song was “3,000 Miles,” so he was opening the show with the hits. Not a bad decision after so long without live concert performances. This is a song that he has played a whole lot over the years, but at this show it had a fresh energy.

From the 2019 album The Storyteller’s Suitcase, he played “You’ll Never Be This Young Again,” a song that urges its listeners to pursue their dreams now. After all, life is short. This song has a tremendous amount of appeal, and I think its appeal has increased because of the pandemic, when many people have taken a closer look at their lives and their priorities. Ellis then spoke about the pandemic, describing that day in March last year when he learned that all of his booked shows had been canceled. In addition to performing many online concerts, Ellis Paul has used the time to write some new material, and he played a couple of those songs at this show, “Shane’s Lost Weekend” and “The Gift.” He then invited Laurie MacAllister back onto the stage to join him for the next few songs, beginning with “I Ain’t No Jesus,” another song from The Storyteller’s Suitcase. Before “Kick Out The Lights,” Ellis told the story of Johnny Cash getting banned from the Grand Ole Opry, saying that was “like kicking Jesus out of heaven.” This was a great version of the song. Laurie sang lead on a verse, and the whole audience seemed to be joining in on the chorus, belting out the lyrics from behind their masks. Ellis then moved to the piano for “Home,” and as he started the song, Laurie said “This is my favorite Ellis Paul song.” The two of them delivered an absolutely beautiful rendition. Then after Laurie left the stage, Ellis said, “Felt a little Sonny and Cher to me.”

Moving away from New England doesn’t mean losing an interest in the area’s sports teams, and though Ellis now lives in Virginia, he asked the crowd about the baseball game. Several people shouted out that the Red Sox had won. He then improvised an ode to Massachusetts sports, and that quickly became a love song to Tom Brady (who of course has also moved on from New England). “I love Tom Brady/It’s easier to say than Yastrzemski/And he’s prettier than Larry Bird.” He followed that with “Straight To The Moon,” a song that is a total delight, one that never fails to make me happy. He then asked if there were any requests, and a lot of different song titles were shouted out. The one he chose was “Alice’s Champagne Palace,” and he delivered an energetic rendition. Apparently, a new Alaska trip is in the works, and on that trip he’ll be playing a couple of shows at that venue. Alaska is one of only two states I still haven’t visited, so this might be the time to go there. We’ll see.

As I mentioned, Ellis Paul has been doing online performances throughout the pandemic, including some shows exclusively on the Patreon site for paying members. That was a way for him to continue to be able to support himself while music venues were closed and tours canceled. Taking requests from fans led to him revisiting a lot of his older material. He also expanded his usual repertoire by learning quite a few covers, which led to his latest album, Ellis Paul’s Traveling Medicine Show Vol. 1, a disc that has only one original song on it. From that album, he played “Over The Rainbow” and “Angel From Montgomery,” the latter being a song written by John Prine, who died during the pandemic. He then concluded the set with “The World Ain’t Slowin’ Down,” performing most of it unmiked. Laurie MacAllister joined him again on vocals for this one, and the audience sang along with the chorus. Laurie also joined him for the encore, a cover of “Concrete River,” a song written by David Glaser and included on Ellis Paul’s Traveling Medicine Show Vol. 1. It is the song that Ellis has chosen to end a lot of his online concerts as well. “Long is the road that lies between us/Many are the days since you’ve been gone/May the angel on your shoulder guide you safely through the night/And may the concrete river bring you home.” The show ended at 10:35 p.m.

The Center For Arts In Natick is located at 14 Summer St. in Natick, Massachusetts.


Posted by Michael Doherty at 2:31 PM