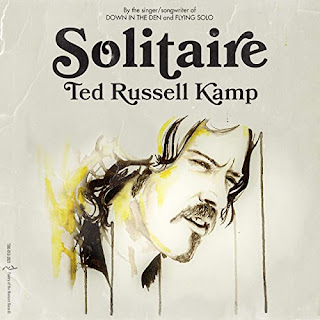 A new release from Ted Russell Kamp always me happy. I’ve definitely come to rely on him to provide some well-crafted, meaningful and engaging songs, songs that speak to us on that human level that is both intimate and universal. His new album, Solitaire, was recorded mostly at his home during the pandemic, and mostly alone. Thus, the title, which of course is a perfect title for these strange days of isolation. And certainly Ted Russell Kamp can create an album with a full sound all on his own, for he plays bass, acoustic guitar, electric guitar, dobro, dulcimer, mandolin, banjo, organ, accordion, drums and percussion, in addition to providing the vocals. He also wrote or co-wrote all the material. Yet he does get some help from other musicians and singers on various tracks, the collaboration accomplished remotely and safely. This album follows 2020’s Down In The Den.


Solitaire opens with “My Girl Now,” a song with a bright sound and positive vibes, which I imagine most of us are looking for. It’s a love song for those of us who have a bit of age and some experience. I can’t help but think of my girlfriend when I hear lines like “Can’t imagine if I never got your number/If we let the past get in the way/‘Cause if we never took the chance to save each other/Can’t imagine where we’d both be today.” This song seems to look forward to a wonderful future. It’s followed by “Path Of Least Resistance,” one of those beautiful folks songs that offer a shoulder and a friendly ear, as well as a friendly voice. “You keep one eye on the rearview and the other on the road/Sometimes the path of least resistance is the only way to go.” It is a song of perseverance. Then “You Can Go To Hell, I’m Going To Texas” has a spirited, full band country sound. And indeed, Ted Russell Kamp gets some help on this track from Jim Doyle on drums, John Schreffler on pedal steel, and Vanessa Olivarez on vocals. “You can call me crazy, you can say I’m reckless/But you can go to hell, I’m going to Texas/I’m going to say it one more time, so I know you won’t forget this/You can go to hell, I’m going to Texas.” And of course that title is catchy and memorable.

“Birds That Sing At Dawn” has a gentle, pretty sound, and some damn fine, serious lyrics about a love that is gone. Lines like “And the quilt her mama made us, it don’t bring me comfort now” and “But there ain’t no laughter now because she’s gone” stand out. And yet there is some hope in this song, for it is about waiting for the birds at dawn, waiting for the new day, and whatever that might bring. “So I’ll sit here drinking whisky/And listen for the birds that sing at dawn.” Well, that describes perfectly how a lot of us have been coping lately, right? That’s followed by “As Far As The Eye Can See.” Though Ted Russell Kamp plays a pretty wide variety of instruments, it is the bass he is probably best known for. He plays bass for Shooter Jennings, and when he sits in with other musicians, it is often on bass. And on his 2015 release, The Low And Lonesome Sound, the bass is the main instrument accompanying his voice. On this song too, the bass is the main instrument. There is also some prominent finger snapping. He is joined on vocals by Matt Szlachetka, who also co-wrote the song. “If I could feel your every sorrow/If I could know your every fear/I’d comfort you through each tomorrow/And I would hold you oh so near.”

Mark Mackay joins Ted Russell Kamp on electric guitar and vocals for “The Hardest Road To Find,” a song they wrote together. This song has a sweet, easygoing sound, the guitar work reminding me of some 1970s folk music. This song lets us know we are not alone in our struggles, even if our personal troubles are not those of the character of this song. We can probably all relate, to some extent, to these lines: “What I miss the most is the piece of me I left behind/The way back home is the hardest road to find.” Who hasn’t changed and lost something of himself or herself along the way? That’s followed by the album’s title track, “Solitaire,” and fittingly, there are no guests on this track. This one is vocals and guitar. “Been fighting with the feeling like I’m alone inside a maze/Don’t know what’s in the cards, but I’ve been circling around for days/Well, I could try to start again, but it won’t get me anywhere/Either way, the game I play is solitaire.” In subsequent verses, we learn that he is not alone in feeling alone. Then Shane Alexander and John Schreffler join Ted Russell Kamp on vocals for “Western Wind,” bringing us together again. Shane Alexander also co-wrote this song with Ted Russell Kamp. “Won’t you carry me away/To another day/Make my journey safe/That I may see the world.” Ah yes, that sounds so good. And toward the end there is a section that is delivered a cappella.

Ted Russell Kamp gets bluesy with “Be Your Man,” a song that he wrote with Tony Scalzo, and one that has a cool, kind of sexy vibe. There is always something sexy in those promises of what you’ll do for your woman, when she makes you feel you can do and be whatever she needs. “I’ll be everything you want if you say I can/I’ll be anything you need if I could be your man, that’s right/I’ll be your high-beam headlights to help you find your way/I’ll be a full tank of gas when you want to drive all day.” Then “A Rose Or Two” reaches out to those of us listening, offering this bit of advice: “We waste so much time doing what we need/You gotta make time for what you love/A life without a dream ain’t nothing at all/So hold on to what you’re dreaming of.” And check out this line: “The things I thought I needed cost me what I love most.” What a strong and excellent line. This is a seize-the-day type of song, that message being one we could all stand to hear more often, I bet.

On “The Spark,” Jim Doyle is on drums, and John Schreffler is on pedal steel. Brian Whelan joins Ted Russell Kamp on vocals. This track has a steady rhythm, and something of a haunting sound, for a man who himself seems haunted. “My lover’s sleeping next to me, my head is filled with fear/And my gas tank is empty, and I’m running out of luck/I’m tired of living without passion, just working for a buck.” That’s followed by “Only A Broken Heart,” which features a groovy, catchy bass line and finger snaps, a track ready to raise our spirits, telling us “It’s no use trying to understand what’s in somebody’s heart/If you were me, you just might see you’re tearing me apart/No more looking back, no more wearing black/‘Cause I know it’s only a broken heart.” Ed Jurdi then joins him on slide guitar and vocals for “Exception To The Rule,” a gentle, tender song. I like that instrumental section in the second half. “Who play among the stars and sail above the oceans/The wind might blow, but it won’t stop us, no.” The album concludes with a lively, rowdier, fun number, “Lightning Strikes Twice,” a catchy song with a bluegrass vibe (I could totally see Yonder Mountain String Band covering this one). Don Gallardo co-wrote this one, and joins Ted Russell Kamp on vocals. “You can put your money in on a card that just won’t win/But a bluff is just a dream in disguise/Well, I’m gonna stand my ground, let the rain pour down/Because lightning’s striking twice.”

Posted by Michael Doherty at 12:04 PM