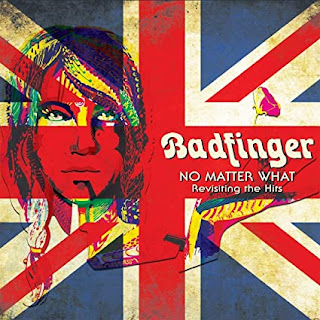 Badfinger is a band that was championed by The Beatles, the first group to be signed to Apple Records, and with a sound similar to that of the Fab Four. In fact, Paul McCartney wrote one of the band’s early hits, and George Harrison produced some of their material. Members of Badfinger also played on several solo albums by Beatles members, including George Harrison’s All Things Must Pass and John Lennon’s Imagine. Badfinger might have stretched the connection a little too far when they wrote a song called “Love Me Do.” But no matter. Things were going really well for the band, and should have continued that way. But then the band’s manager cheated the members out of most of their money, and there were disputes over royalties, and two members ended up committing suicide. Certainly one of the more depressing stories in rock. But they left behind some excellent music. The surviving members have reunited at times, and Joey Molland has continued the band as Joey Molland’s Badfinger. Now that group is revisiting some of the biggest hits on the new album, No Matter What, getting help from special guests on each track.

The album opens with its title track, “No Matter What,” a song from the band’s 1970 LP No Dice. Here Badfinger is joined by Mark Stein (of Vanilla Fudge) on vocals and keyboards, delivering a good version, with just the right kind of energy, and including the hand claps and that brief pause toward the end. That’s followed by “Come And Get It,” which was written by Paul McCartney and included on Magic Christian Music. This is the song that first jumps to mind whenever Badfinger is mentioned. It is such a great song. “Did I hear you say that there must be a catch/Will you walk away from a fool and his money.” This version features Rick Wakeman (of Yes) on piano.  One of the most memorable and fun elements of the song is that addition of “Sonny!” after the “fool and his money” line. Don’t even try to tell me you don’t shout along with that one word whenever you hear this song. Carl Giammarese (of The Buckinghams) then joins Badfinger on guitar and vocals for “I Don’t Mind,” another track from No Dice, one you might not be as familiar with, but one that is more interesting. This is a mellower, cool tune written by Tom Evans and Joey Molland. And the more I listen to this disc, the more drawn I am to this track in particular.

“Day After Day” is a song that was produced by George Harrison, and it has always felt like a George Harrison song to me, though it was written by Pete Ham. This one was a big hit for the band, reaching #4 on the chart. The version on this disc features Ian Anderson (of Jethro Tull) on flute, Terry Reid on guitar and backing vocals, as well as the Manchester String Quartet. This track is one of the disc’s highlights, in large part because of Anderson’s presence on flute, which gives this version its own distinct sound. Rick Springfield then joins Badfinger on guitar and vocals for “Love Is Gonna Come At Last,” a song from a little later in the band’s career, originally appearing on the 1979 LP Airwaves, the first album released after the death of Pete Ham. It was written by Joey Molland. And though this song might be considered a little cheesier than the other material, this is a sweet rendition.

“Baby Blue” is another of the band’s most popular songs, this one coming from the 1971 LP Straight Up. This song is about a woman that Pete Ham dated, and she is directly named in the lyrics. Must be odd to have a popular song written about you. Anyway, Matthew Sweet joins Badfinger on guitar and backing vocals on this track, helping to make this another of the disc’s highlights. Edward Ka-Spel of The Legendary Pink Dots is on keyboards for a pretty rendition of “Midnight Caller,” a song from No Dice. This is another of the band’s more meaningful tracks. Check out these lines: “She’s got no saint to follow/She’s got no place to go/Too proud to ask an old friend for help/Too proud to let him know.” It was written by Pete Ham. “Suitcase” has more of a 1970s rock sound, and is from Straight Up. It was written by Joey Molland. For this rendition, Sonny Landreth offers some great work on slide guitar. Then Albert Lee joins Badfinger on guitar for “Sweet Tuesday Morning.” Interestingly, this song also follows “Suitcase” on Straight Up, and was also written by Joey Molland. It is another pretty track.

For a long time I assumed that Harry Nilsson had written “Without You.” After all, Nilsson was a phenomenal songwriter, and his version was a #1 hit. But no, it was written by Pete Ham and Tom Evans, and originally recorded by Badfinger, and included on the band’s No Dice album. It is an absolutely wonderful and heartbreaking song. “I can’t live/If living is without you/I can’t live/I can’t give anymore.” The song’s two writers, Ham and Evans, are the members of Badfinger who committed suicide. And apparently Evans’ suicide was brought on at least in part because of lack of royalties from this very song. On this version, Badfinger is joined by Todd Rundgren on guitar and vocals. Rundgren interestingly worked as a producer on the band’s Straight Up album. This is an excellent and moving rendition, and features some really good work on guitar.

No Matter What – Revisiting The Hits is scheduled to be released on March 26, 2021 on Cleopatra Records, and is going to be available on both CD and vinyl.

Posted by Michael Doherty at 2:05 PM