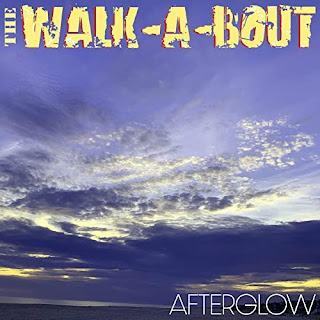 The Walk-A-Bout is a rock band based in New York that put out its first album in 2017, and followed that self-titled debut with Things Are Looking Up in 2018 and 20/20 in 2020. The band’s new single is a cover of “Afterglow,” a song written by Andrew Farriss and Desmond Child as a tribute to Michael Hutchins, and originally released by INXS in 2005, several years after the death of that band’s original lead singer.

The Walk-A-Bout delivers a beautiful rendition of “Afterglow,” featuring some nice vocal work and hints of a late 1960s vibe, with a bit of a folk-rock sound. There is also a string section, which adds to the beauty and emotional impact of the track. I was never a fan of INXS. Something about their sound in the 1980s irritated me, and I didn’t listen to any of their output after that. But I really like this song, particularly the way The Walk-A-Bout approaches it. “Touch me and I will follow/In your afterglow/Heal me from all this sorrow/As I let you go/I will find my way when I see your eyes/Now I'm living in your afterglow.”

The second track on this single is an acoustic version of “Hero,” a song from 20/20 that was written by guitarist Dave Christian. I prefer this new version over the original album track. It is somehow more engaging. “It’s getting harder to see all the good intentions that led us here/It’s getting harder to fight all of the anger and all of the tears/Seems like a lifetime watching you change.” This track also features some good work on guitar.

Afterglow was released on February 5, 2021 on Shred The Evidence Records.

Posted by Michael Doherty at 8:16 AM