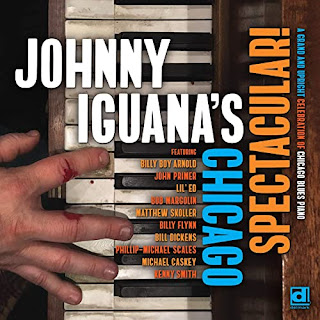 I know Johnny Iguana from his work with the fantastic band The Claudettes. They released a new album, High Times In The Dark, earlier this year. But he also has a pretty serious history in the blues, having played with Junior Wells (you can hear him on his Live At Buddy Guy’s Legends, where he is credited as Johnny “Fingers” Iguana), as well as several other blues artists. And now he has released an album on which he shares his love for the blues. Titled Johnny Iguana’s Chicago Spectacular!, it features material by some of the best-known blues artists, including Willie Dixon and Sonny Boy Williamson. There are also some original tunes, written by Johnny Iguana (whose real name is Brian Berkowitz), all of them instrumentals, and all of them previously recorded by The Claudettes. Johnny Iguana has gathered some excellent players together for this release, including Billy Boy Arnold, John Primer and Billy Flynn.

As you’d expect, the album opens with some wonderful, seriously enjoyable work on piano. The first track, “44 Blues,” a song written and originally recorded by Roosevelt Sykes, features John Primer on vocals. And with that work on piano, it feels like some kind of blues celebration. And, hey, that’s what it is, right? There is also some really good work by Bob Margolin on guitar. That’s followed by one of the Johnny Iguana originals, “Hammer And Tickle,” a title that I dig. This is a cool instrumental track, originally included on the debut album from The Claudettes, Infernal Piano Plot… Hatched! (yes, Johnny Iguana likes his exclamation points; the band’s 2018 album is titled Dance Scandal At The Gymnasium!). This new version features some wonderful work by Michael Caskey on drums and Bill Dickens on bass, as well as plenty of great stuff on keys. It’s a fun tune that grooves and shakes and moves forward with no hesitation or pause.

The piano comes thumping in with an ominous sense at the beginning of “Down In The Bottom,” so just look out, everyone. Step aside and let this one come stomping in. This song was written by Willie Dixon, and recorded by Howlin’ Wolf. This great version by Johnny Iguana features John Primer on both vocals and guitar. That’s followed by a totally fun rendition of Sonny Boy Williamson’s “You’re An Old Lady,” this track featuring Billy Boy Arnold on vocals and harmonica. The piano has a great life of its own, often feeling like an entire band itself. But all the musicians on this track, including Billy Flynn on guitar and Kenny Smith on drums, are grooving and rocking, and I wish they’d jam a bit longer at the end. I particularly love that work on harmonica. Then “Land Of Precisely Three Dances” comes on strong and furious, at a great pace, that piano driving everything ahead. This is one of the Johnny Iguana original compositions, this instrumental first included on The Claudettes’ debut album (in fact, three of the four Johnny Iguana compositions on this disc are from that release). There are some interesting changes to this one, feeling at times like some insane dance song that had been infiltrated and corrupted and made oh-so-much-better by the blues. And it features more excellent work on drums by Michael Caskey.

Phillip-Michael Scales delivers a good, soulful vocal performance on “Lady Day And John Coltrane,” a song written and originally recorded by Gil Scott-Heron (it was included on his 1971 LP Pieces Of A Man). He also plays guitar on this track. This is a great choice of songs to cover in these harsh and uncertain days. “Ever feel kind of down and out/You don’t know just what to do/Living all your days in darkness/Let the sun shine through/Ever feel that somehow, somewhere you lost your way/And if you don’t get help quick, you won’t make it through the day.” That’s followed by “Big Easy Women,” another original instrumental number, this one originally included on The Claudettes’ second album, No Hotel.  This track has a fantastic, delightful energy. I can feel that piano breathing, sweating. And after a minute or so, things are taken up another few notches. This is so much damn fun, and features good work by Michael Caskey on drums and Bill Dickens on bass. Things then get much more bluesy with a wonderful rendition of Otis Spann’s “Burning Fire,” featuring a powerful vocal performance by Lil’ Ed, helping to make this track something really special. It has a classic sound and vibe, and I love that instrumental section, particularly the play between the piano and guitar. Wonderful stuff. Lil’ Ed also sings and plays guitar on a rockin’ version of Elmore James’ “Shake Your Moneymaker,” which includes a great instrumental section at the end.

The album’s final original instrumental is “Motorhome,” a tune that was included on the first album by The Claudettes. This track moves a lot faster than I would have thought a motorhome could go. That is, until recently. On the drive to Colorado, a giant motorhome came barreling down on us going like eighty-five or something, a monster driven by some demonic force to which fatigue is unknown, powered not by gasoline, but by the fear of other drivers. And, hey, this track is something of a beast itself, driven by some inner force.  That’s followed by the album’s second Sonny Boy Williamson song, “Stop Breaking Down,” featuring Matthew Skoller on vocals and harmonica. I’m not sure which is more impressive – his cool, strong vocal performance or that lively, masterful work on harmonica. This is another of the disc’s highlights. This excellent album then concludes with a delicious rendition of Big Bill Broonzy’s “Hot Dog Mama,” this track featuring Billy Boy Arnold on vocals, and Billy Flynn on guitar. “I’m going to get drunk now, baby” is a line I think we can all relate to. Is anyone still sober out there? God help you.

Posted by Michael Doherty at 8:42 AM