The Jason Daniels Band: “Downloads From The Universe” (2020) CD Review 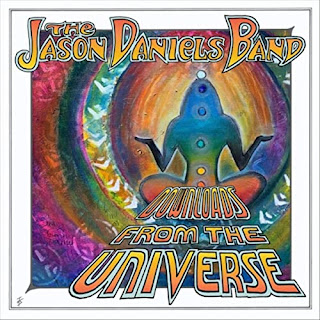 The first time I listened to Downloads From The Universe, the new album from The Jason Daniels Band, I was sinking into a serious case of the blues. Sometimes the state of the world is just too much, you know? There is so much ugliness, so much hatred, so much anger, and then with the pandemic, reality has been more stressful and further distorted. The album’s first track, “I’m Not Going Down,” kept me from sinking any farther. And that’s a great thing that music can do, hold out a hand to us, offer support. The Jason Daniels Band is based in Jackson, Mississippi, and delivers music that takes influence from several different genres and offers us an optimistic and positive view, something we can certainly appreciate. The band is made up of Jason Daniels on guitar and vocals, Murph Calcedo on drums, Rob Wicks on bass, and Chris Nash on keys. Joining them on this release are Michael Laskin on organ, Jennifer Gibbons on backing vocals, Steve Stevens on saxophone, Scott Albert Johnson on harmonica, and Frito Tuente on percussion. The album contains all original material, written by Jason Daniels.

In that opening track, “I’m Not Going Down,” Jason Daniels sings “There’s no one coming to save me/I’m drifting away to sea/I’m terrified,” and that’s exactly how a lot of folks feel. We are all on a sinking ship, “bailing like crazy.” But he follows that by insisting, “I’m not going down, I’m not going down.” And that’s what we all must do these days. This track features some nice work by Steve Stevens on saxophone. That’s followed by “It All Can Slip Away,” a song that has a good groove and features some nice work on keys. At the beginning, Jason sings “It all can slip away/We’ve got to live today/Because there’s no guarantee of tomorrow.” There are many songs that urge us to seize the moment, to live for the day, and we need them all. We need constant reminders to appreciate life each day, and to let go of our hatred, our heartache, our sorrow. This song urges us to let the music help us get through, and that’s what many of us have been doing during these dark and strange days, though I’m not sure how many of us have been able to “boogie on down,” as this song encourages. We’re not quite there yet.  I hope we will be soon. “The time has come/To trade hate for love/Don’t have to carry around all these sorrows.”

“Music Is A Prayer” is a soulful, uplifting number about the power of music to help us, telling us “Every time you sing a song/You’re sending up a prayer/Music is vibration/Let your frequency be clear.” The line “Let your music fill the air” reminds me of a line from my all-time favorite song, the Grateful Dead’s “Ripple”: “Let there be songs to fill the air.” Then “I’ve Been Ramblin’” features some good work on harmonica. This is another song to add to my road trip play list. Now I just need a road trip. My girlfriend and I have talked about getting an RV. There is something so appealing about that now, isn’t there? This song has a strong groove, and becomes a damn good jam, exactly the sort of thing to keep you going during those long stretches on the road where there seems to be nothing of interest in any direction. “I’ve Been Ramblin’” is followed by “39202,” which has a funky groove and includes some nice work on saxophone. There is a good energy about this instrumental number. Its title, by the way, refers to a zip code in Jackson, Mississippi. “Be My Friend” also features a good groove.

“Dead And Gone” comes on strong, ready and eager to rock us. “When I’m dead and gone, please don’t put me in no grave.” It is interesting to cut loose and simultaneously think of one’s own demise, but maybe that’s what we’re doing on a daily basis, cutting loose as a way of keeping it at arm’s length. I always figure if I’m dancing, death can’t touch me. Don’t tell me I’m wrong. This song features some great stuff on guitar. At moments, this track reminds me of Eric Clapton’s version of “After Midnight.” That’s followed by “Breathe,” which immediately announces itself as a fun track, with that work on keys, and the saxophone. It is a positive number, with lines like “You’re beautiful/You’ve come so far/You’ve got so much to give” and “Forgiving yourself, that’s where you start/You’re going to do some things wrong, you’re going to do some things right/Don’t give into the darkness, look at the light.” There are more positive vibes on “Get Down With Now,” another song with a delicious groove. The album then concludes with “Prayer To The World,” which should do the trick of reminding each of us that we are not facing these troubles alone. In fact, a large group of backing vocalists adds support to this one, adding their voices to this prayer to the world.

CD Track List
Downloads From The Universe is scheduled to be released on July 31, 2020, and is going to be available on both CD and vinyl.
Posted by Michael Doherty at 11:05 AM