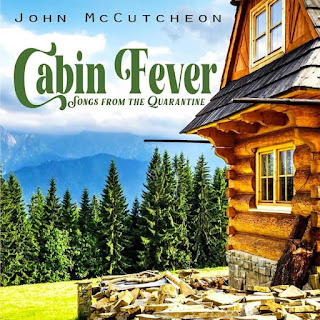 These are strange and unsettling times for everyone. Or, for nearly everyone. There are still some people out there who seem unfazed and unaffected, who refuse to wear masks, even though now it is not only the right thing to do, but is a rule here in California (and elsewhere). I get that we are all sick of this pandemic, of wearing masks, of keeping our distance, of avoiding crowds, of isolation, of watching concerts on our computers, but the pandemic is not over. So what have you been doing with your time? John McCutcheon wrote and recorded an entire album of songs addressing this insane situation we’re all faced with. That’s right, during this period of isolation he wrote and recorded nearly an hour of new material. And these are strong and powerful songs, dealing with different aspects of this odd reality we’ve been immersed in. John McCutcheon is a talented songwriter, and on this album he reaches out to all of us during this time and reminds us we are not alone. As you might guess, this is a solo album. John McCutcheon plays all the instruments and provides all the vocals.

The album opens with “Front Line,” a song that focuses on the medical personnel who are risking their own lives in order to save the lives of others. It is told from the perspective of someone on that front line. Here is a taste of the lyrics: “Not enough gloves/Not enough masks/Not enough hands/And too many tasks/When is help coming?/Everyone asks/This is life on the front line.” And these lines are particularly effective and moving: “I pray I’ll stay healthy/Though the chances are slim/I pray it’s a battle/That we’ll finally win/But tomorrow, no matter/I’ll show up again.” Indeed, doctors and nurses must be terrified of getting sick, and so many have gotten sick. We must not forget about what these folks put on the line. We have lost more than 120,000 people here in the United States (so far), and for every one of those deaths, there is a story of a family that is wrecked. Of course, some deaths have an impact far beyond the immediate families and close friends, and such is the case with John Prine, one of the greatest songwriters the world has known. With “The Night That John Prine Died,” John McCutcheon pays a heartfelt tribute to that singer/songwriter, singing “They told our tiny triumphs/And lives fi­lled with despair/Complex in their simplicity/So honest and so true/Just what every writer/Wished that they could do.” The song’s chorus refers to several John Prine songs, including “Angel From Montgomery,” “Sam Stone” and “Paradise.”  The lines “And the blessed few who really do/Make heaven out of hell” give a perfect description of those singers and songs that touch us deeply, that make our lives better.

“Sheltered In Place” tells of a person who is homeless during this pandemic, for whom the stay-at-home order is meaningless. “I’ve sheltered in place for years/Nobody knows I’m here/I’m one of the many who just disappears.” As hard as it is for the rest of us during this time, it must be all the more difficult for those who were alone already, who make their home in “An underpass, a tent, if I’m lucky, a car.” These lines also stand out: “I don’t know for sure/But I doubt there’s a cure/For the worst things that drive us apart/And that silently poison our heart.” That’s followed by “In Bristol Bay,” which has a brighter, more cheerful sound to the guitar work. This one is about people who are fighting to save the land and waters they love in Alaska. Then “Control” is kind of a playful song, the first verse being about squirrels taking the food he set out for the birds, and his testy reaction. That brings me back to my childhood, for my parents made the same complaints. But in this song he relaxes about it, and just fills the bird feeder more often. For this song is about not getting upset about the things we can’t control, and taking control of the way we react to those situations. That is something most of us probably need to keep in mind. There is a verse about Facebook that everyone should listen to. Here is a bit of it: “No one has ever changed/A single heart or mind/By all the crap you find/In a medium so vile.” This song leaves us with this thought: “All the extra time I have/I read and play and write/Spend time with my family/Get good sleep every night/There are things that matter/And most you can’t control/And figuring the difference/Is a tonic for your soul.”

John McCutcheon switches from guitar to piano for “One Hundred Years,” a song about looking at the present and wondering what sort of future we are helping to create for the next generations. These lines, of course, stand out: “Have we done all that we could/Or in trying to be great again/Forgotten to be good?” That says it all, doesn’t it? He goes back to guitar for “Six Feet Away,” a sweet and playful number about trying to strike up a love affair from a distance of six feet. “Oh, how I longed to ask her/To lift up her mask/But I loved her from six feet away.” I wonder what people will make of songs like this in ten years or so. Will an explanation be necessary? Will people remember? That, of course, assumes that this will pass, and we can return to a reality of physical contact, of handshakes and hugs. This song also makes the connection to the distance people are buried beneath the ground: “But when this life is over/And I’m ‘neath the clover/Once more I’ll be six feet away.” That’s followed by “That’s All,” a song about friendship, that real sort of friendship, the true sort of friend. Be one of those people to someone. Then “Hallelujah Morning” feels simply like a celebration of life. And how about that?

“Vespers” is a moving song about our journey through this life, and features a heartfelt vocal performance. Check out these lines: “We pray for peace/We rush to war/From those with less/We ask for more/We hoard, we gather/We give, we grieve/And in our certainty/Cannot believe.”  John McCutcheon then lifts us up with a song about how a dog interprets this strange time, “My Dog Talking Blues.” The first lines are “My dog don’t know no quarantine/She’s just happy I’m around.” Ah, if only we could look at it the same way as the dog, right? There is a delightful cheer to this song, and a certain humor, as when the dog calls her owner a good boy after he scratches her ear and rubs her belly. That’s followed by “When All Of This Is Over,” a song that questions what life will be like when the pandemic is finally done, and what we will be like. This is a positive song, detailing some of the advantages of this period of isolation. “And for supper we ate breakfast/For breakfast had ice cream/We learned how to be bored again/Found time to dream.” And it offers this optimistic view of the near future: “I suspect there’ll be some changes/From how things used to be/We can each get by with less/We can each want so much more/‘Cause what matters truly matters/When all of this is o’er.” Indeed. I’ve been thinking about this a lot lately.

“The Donkey” is a song inspired by Mary Oliver’s poem “The Poet Thinks About The Donkey.” The song begins, “Such a day it has been for the donkey/The strangest he ever has seen/It ends, as begun, tied to this post/But, ah, the hours in between.” That’s followed by “The Bean,” which is delivered a cappella. I guess many people have become fond of beans during this pandemic. There were a couple of weeks there when I couldn’t find any vegetarian refried beans. It’s been odd trying to keep up with the items that sell out due to great demand. Hand sanitizer, water, toilet paper, sure, but also beans and – one week – pita bread. Like “The Donkey,” “Monet Refuses The Operation” was inspired by a poem, this one by a poem of the same name by Lisel Mueller. Then “Earth” is delivered from the perspective of our planet. “You act like you own the place/Never learned that that isn’t the case/You were born into a paradise/Destroyed it without thinking twice/Now you can’t imagine there’s a price/When you act like you own the place.” When people seem horrible and worthless (and that is the case fairly often these days), I must remember that people are also capable of so much good. Will we be able to save the planet? Well, the planet will continue without us, and that’s what this song is about. “So, go ahead and go extinct/You’re much more expendable than you think/Just eat up ‘til you’ve had your fi­ll/You might worry about me, and still/I’ll survive, but I doubt you will/So, go ahead and go extinct.” That’s followed by “Traveler’s Rest,” which is the name of the cabin where John McCutcheon wrote these songs. “I’m off to the one/That has loved me the best/I’ll hang up my hammock/At Traveler’s Rest.” The album then ends with a very brief song, but one that I believe everyone will relate to. It is titled “The Night That John Prine Died (Original Lyrics),” but its lyrics could apply to most nights, days and situations these days. It made me laugh out loud, and, well, that’s all I’m going to say about it.

CD Track List
Cabin Fever: Songs From The Quarantine was released on May 15, 2020.
Posted by Michael Doherty at 1:08 PM