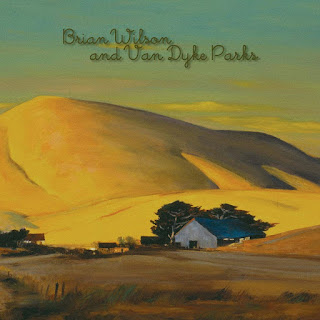 Do you find yourself continually returning to the music of Brian Wilson? I certainly do. Something about this guy’s voice and sound calls to us again and again. I recently watched Echo In The Canyon, the documentary about the musicians who lived in Laurel Canyon area of Los Angeles, and it was interesting how much love and respect they expressed for Brian Wilson and for The Beach Boys. Pet Sounds is on many lists of the best albums ever recorded. And in 1966, after that album was released, songwriter and musician Van Dyke Parks came in to write lyrics for Smile, which was the intended follow-up to Pet Sounds. However, it wasn’t finished, and those tracks wouldn’t see a release until 2011. In the mid-1990s Brian Wilson and Van Dyke Parks teamed up again for Orange Crate Art, an album featuring material mostly written by Van Dyke Parks, with Brian Wilson providing the vocals. The songs are about California. And what better topic is there for Brian Wilson’s voice? Now an expanded two-disc version is coming out, with plenty of bonus tracks, as well as new liner notes written by Brian Wilson and Van Dyke Parks, offering personal thoughts and memories of the project.

The first disc contains the complete original album, along with a few bonus tracks. It opens with the title track, “Orange Crate Art,” which begins beautifully with some work on strings and has a sweet vibe. It isn’t long before Brian Wilson’s voice impresses us with its own special beauty. “Home for two with view of Sonoma/Where there's aroma and heart.” This song contains a nod to “The Battle Hymn Of The Republic” in the line “And it rolls where grapes of wrath are stored.” It is followed by “Sail Away,” a tune with a pleasant island vibe. I like these lines especially: “And we'll explore what might have been/And leave the shore and give this tired old world a spin/When my ship will come in.” This track features some nice work on percussion, as well as some good backing vocals. “My Hobo Heart” is one of the album’s few songs not written solely by Van Dyke Parks. Parks composed the music, while the lyrics are by Michael Hazelwood. It is a love song about a wandering soul finally wanting to settle down. Is that a kalimba at the beginning of “Wings Of A Dove”? This is an interesting track, and it takes on a bit of a carnival sound, if only briefly, the first of a few songs to do so. “Palm Tree And Moon” has something of an easygoing vibe, like an ocean breeze. Interestingly, this one uses that sort of carnival sound for a moment too.

“Summer In Monterey” is one of my favorite tracks. When it starts, its rhythm reminds me of something that Harry Nilsson might have written for The Point. This song is a delight. I love its carefree vibe, particularly these days. It holds a tremendous amount of appeal. As it describes a more innocent time and place, there is a nostalgic quality, but also a magical quality. It is a song of first love and being by the ocean. Don’t we all like to place our first loves at the beach, regardless of where they might have truly occurred? “Take you to the movie show/Watching arm in arm/Used to hope the film would work its charm/Then, you and I, we’d saunter home.” This track also features some nice work on harmonica. “Summer In Monterey” was written by Van Dyke Parks and Michael Hazelwood. It is followed by “San Francisco,” kind of a strange number, and again with a bit of a carnival feel at moments. There is something kind of goofy about this one, and yet it is also totally wonderful, and is another of my favorite tracks. It would be difficult to dislike this one. Here is a taste of the lyrics: “Giddy up down to/San Francisco (giddy up)/San Francisco (giddy up)/Where love is true as time and tide/She was seventeen though/When I left from Reno/Like some Valentino/With my bride there by my side.”

“Hold Back Time” is a sweet song with a nostalgic quality. “Our new old house by the track/At her window was a touch of lavender lace/I remember her face.” That’s followed by “My Jeanine,” which has a nice instrumental section in the middle that has a romantic, European feel. Then in “Movies Is Magic,” Brian Wilson sings, “Movies is magic/Real life is tragic.” Apart from the questionable grammar, I like those lines. There is something rather beautiful about this song. “It is time we get away/To the movies and magic.” Indeed. As much as I love movies, I can’t even recall the last time I went to the movie theater. Feels like ages. Just before this track ends, the music swells, like we are coming to the climax of a movie and the lights are about to come on to force us back out into reality. That’s followed by “This Town Goes Down At Sunset,” which was written by Michael Hazelwood. The final line of this one is “Everybody goes back to bed,” so it makes perfect sense that it would be followed by a track titled “Lullaby.” This is a beautiful instrumental track written by George Gershwin. I’ve said it many times, but it continues to be true: You can never go wrong with Gershwin. This piece was written for string quartet, and is one of his earlier compositions. It feels like it could be part of the soundtrack to some magical, wonderful film.

The first disc contains three previously unreleased bonus tracks, all of which are covers, and two of which are Gershwin songs. My favorite piece of Gershwin music is “Rhapsody In Blue.” I love how that piece is used in Manhattan, which I think is Woody Allen’s best movie. Certainly a part of that film’s appeal is the score, and I love the way “Rhapsody In Blue” is used to begin the film. Of course, “Rhapsody In Blue” is an instrumental piece. But here Brian Wilson adds his beautiful voice (though not any lyrics), and it works so well. This is a wonderful rendition. Brian Wilson would do a similar thing with this song on his 2010 release Reimagines Gershwin. “Rhapsody In Blue” is followed by a sweet rendition of the Gershwin song “Love Is Here To Stay,” with a string arrangement giving it a full sound. Interestingly, those first lines about reading the papers and not understanding the world are cut from this version. The album concludes with a really nice version of “What A Wonderful World.” I can’t hear this song enough these days. I need the constant reminder that this a wonderful world. My guess is that I’m not alone in that.

The second disc contains instrumental versions of each of the songs from the original release, with the exception of “Lullaby,” of course, since that track was already an instrumental. It might seem odd to take out Brian Wilson’s vocals, as it is that voice that we really pay attention to while listening to these songs. But of course that might be the very reason to do it, to give us more of an appreciation for the music. The beauty of some of these pieces strikes me even more on these tracks, and that sound that feels like a carnival to me stands out all the more. This instrumental version of “San Francisco” is a lot of fun, and I particularly love “Summer In Monterey.” All of the tracks on this disc were previously unreleased.

This special expanded re-issue of Orange Crate Art is scheduled to be released on June 19, 2020 through Omnivore Recordings. There is also going to be a limited run of orange vinyl copies.
Posted by Michael Doherty at 2:00 PM