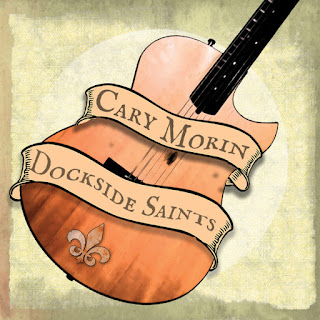 Cary Morin is a singer, songwriter and guitarist based in Fort Collins, Colorado. His music mixes elements of folk and blues, delivered with a good amount of soul. For his new album, Dockside Saints, he traveled down to Louisiana to record at Dockside Studio in Maurice, adding some of that wonderful Cajun sound. Joining him on this release are some seriously talented musicians, including Lee Allen Zeno on bass, Brian Brignac on drums, Corey Ledet on accordion, Eric Adcock on keys, Beau Thomas on fiddle, John Fohl on electric guitar, Keith Blair on electric guitar, and Celeste Di Iorio on backing vocals. The album features all original material, written by Cary Morin.

The album opens with “Nobody Gotta Know,” and right away I’m digging the Cajun sounds and that delicious rhythm. At one point in this song, he speaks of himself in the third person, when a neighbor suggests he plays too loud, with Cary singing “You won’t have to be telling me, ‘Cary, turn it up.’” Throughout the track, there is some excellent work on keys. Also helping this track stand out is Corey Ledet’s work on accordion, and the wonderful, soulful backing vocals. It’s a really good start to the album. It is followed by “Exception To The Rule,” which has a sweeter vibe, with Cary singing “You never question what we have/It’s something that we just can’t hide/Maybe I do it all wrong/Everything is better next to you.” And “I know I’m not that easy to be around” is a line we could probably each sing to our significant other. Perhaps some of us have been learning exactly that during this pandemic, when we’ve been spending the majority of our time at home. This song becomes beautiful, particularly as the vocals gain power toward the end.

I love the guitar work that opens “Prisoner.” It is seriously cool, and the song soon develops an excellent groove. “I had to travel/Ah, yes, I did/Didn’t know where I was going.” Ah yes, we’ve all been there at some point, right? This track is fantastic, in large part because of that guitar work. “I got nobody, no, I don’t/Standing by the phone/Everything I do, well, I do it all alone/All alone.” There is also a nice lead on keys in the second half. Then Cary Morin delivers a soulful and moving vocal performance on “Because He Told Me So.” That’s followed by “Tonight,” for me one of the album’s highlights. There is something beautiful and haunting about the delivery of this one. And a line like “Tonight I’ll try to make it home” carries a certain amount of power. But the instrumental sections are what really pull me in, particularly the part led by Beau Thomas’ work on fiddle halfway through. There is some gorgeous work there.

Cary Morin then picks us up again with “Jamie Rae,” which features more bright, energetic work by Corey Ledet on accordion. And it’s a love song. “Why don’t you say what your heart wants to?/I can’t stop thinking of you.” That’s followed by “Bare Trees,” a beautiful, gentle instrumental number. I love music that has both a sadness and a sense of comfort to it, and this ends up being another of my favorite tracks. “Valley Of The Chiefs” is a powerful track featuring some gorgeous work on fiddle, as well as some excellent stuff on guitar. “Chosen Road” has a wonderfully haunted sound and vibe. The song’s first line is “I’ve been thinking how the time got away from me.” I think we are all in touch with that sense. Interestingly, the line “No, I won’t complain about the chosen road for me” makes it sound like he isn’t responsible for his own choices. Then Cary Morin will get you dancing with “Cary’s Groove,” a fun instrumental tune with a cool bass line and some bluesy work on electric guitar, and also a bit of an Allman Brothers sound at moments. That’s followed by “Blue Delta Home,” a sweet and mellow song, featuring more pretty work on fiddle. “When she is not within my sight/I don’t want to see the light of day anymore.” The album concludes with “Come The Rain,” which has more of a rock sound. “There’s nothing we can do/Don’t let it cut us apart/And maybe when the sun shines/We can find our way through/I watch you smile/It makes me smile too.”

CD Track List
Dockside Saints is scheduled to be released on August 7, 2020.
Posted by Michael Doherty at 8:53 AM