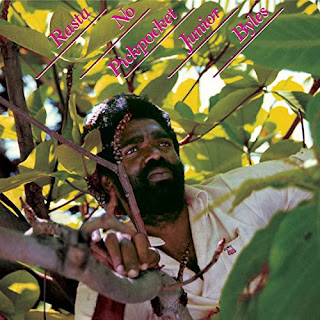 If you’re looking for music that will raise your spirits but that also has a strong sense of social consciousness and responsibility, then reggae is certainly a good choice. Omnivore Recordings has been re-issuing some key recordings from the Nighthawk Records label, including music from Culture, The Gladiators and Winston Jarrett. A couple of years ago, Junior Byles’ 1986 release Rasta No Pickpocket was re-issued with several bonus tracks, the first time this release has been made available on CD. Junior Byles was part of the vocal group The Versatiles before starting his solo career in the early 1970s. Rasta No Pickpocket was his last major release, followed only by some singles and compilations.

Rasta No Pickpocket opens with “Thanks And Praise,” a song with a bright, cheerful vibe, just exactly what we need right now. This song was included on Send I A Lion: A Nighthawk Reggae Joint, a compilation of excellent music from the Nighthawk Records label released in 2019, and is one of my favorite tracks from that disc. Junior Byles’ voice has such a positive, friendly sound that it is nearly impossible to remain in a bad mood while listening to this track. That song is followed by the album’s title track, “Rasta No Pickpocket,” another song with a good groove and positive message. “Rasta is love divine/Get that in your mind/And sing/Sing, sing, sing/Sing, sing sing.” This is a song that Junior Byles was revisiting, having initially released it as a single in 1973. This version is quite different, the changes obvious right from the start. That slow introduction and first few lines from the single are absent here, and instead it begins once that delicious groove gets going. It has an overall happier sound, and there some other changes in the lyrics. “Press Along” is one of my personal favorites. Something about the way the lyrics are delivered raises my spirits. Plus, how can you not groove to that bass line? This song is so positive, and makes me feel hopeful.

Toward the end of “Rasta No Pickpocket,” Junior Byles sings “Ring-a-ling-a-ling ling” and “Ding dong, ding dong.” At the beginning of “I No Got It,” he sings “Ding-a-ling-a-ling.” It gives you a sense of the light and playful mood of the record. In this song he also sings, “Tell me what are we going to do,” a line that seems right for our days too, don’t you think? Taken on its own, it expresses a need for action, and has an optimistic ring to it, the sense that something will be done, and that we’ll do it together. Well, all right. That’s followed by “Cally Weed.” After all, would it be a reggae record if it didn’t have at least one song directly about pot? There is a playful, kind of silly vocal part in the middle of the track, the voice getting higher. “Cally is right for everyone/Cally is right for everyone, don’t you know?” The original release concluded with “I Don’t Know,” my favorite track, one with lyrics that speak strongly to us now, the opening lines being “Demonstration and protest are putting brothers against brothers/Juvenile delinquents are putting mother against child/Men are building rockets going to outer space/Others building implements to wipe out the human race.” The main line is one you might find yourself saying often, and now you can sing it: “I don’t know what the world is coming to.” Even as the song is ending, Junior Byles manages to throw out two more lines that strike us fairly powerfully: “It’s a bloody mess/Get off my chest.”

This special re-issue contains five bonus tracks, including three that were previously unreleased. The first is “This Feeling,” and is one of the previously unreleased tracks. It features another good bass line. “Oh, this feeling/Well, it got me down/Down, down, down.” He then goes on to repeat the word “Down,” singing it with such joy that it lifts us up. That’s followed by “Bur Boy,” a powerful and sadly still incredibly timely song. Its first line is “One more life has gone, so uselessly.” This is a song about folks in the ghetto fighting to be free; it is a song that asks, “What is your meaning of equality?” and “When will this violence ever cease?” Good questions then. Good questions now. Please let’s not have to ask these questions in another couple of decades. This is a song that Junior Byles initially released as a single titled “Bur-O-Boy” in 1975. It is followed by “Weeping,” a song with an easygoing vibe. This song was released as a single and also included on the Junior Byles compilation When Will Better Come. The bonus tracks conclude with different versions of “Press Along” and “Thanks And Praise,” both of which were previously unreleased.