Samoa Wilson With The Jim Kweskin Band: “I Just Want To Be Horizontal” (2020) CD Review 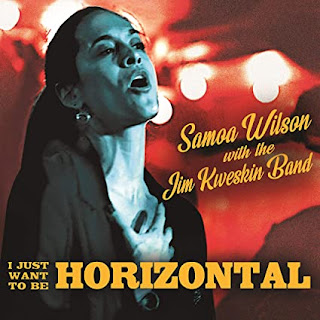 I Just Want To Be Horizontal, the latest collaboration between vocalist Samoa Wilson and The Jim Kweskin Band, focuses on music that Billie Holiday recorded with Teddy Wilson in the 1930s when Billie was still near the start of her career. The music is jazz, but mixes in elements of folk and blues, and we even get a Hawaiian pop number. The band is made up of Samoa Wilson on vocals; Jim Kweskin on vocals and guitar; Titus Vollmer on guitar and ukulele; Mike Davis on trumpet and cornet; Paloma Ohm on alto saxophone; Dennis Lichtman on clarinet, fiddle, mandolin and alto saxophone; Sonny Barbato on piano and accordion; Matthew Berlin on bass; and Jeff Brown on drums.

The album opens with a sweet rendition of “After You’ve Gone,” a song that has been recorded by Bessie Smith, Ruth Etting, and Ella Fitzgerald. This version mixes folk and jazz in a delicious way, and there are instrumental sections that are just a delight, with some great work on guitar and fiddle, as well as from the horns. But of course it is Samoa Wilson’s fantastic vocal work at the heart of it. And after the main instrumental section, Jim Kweskin takes over on lead vocals, singing “After I’m gone, after we break up/After I’m gone, you’re gonna wake up.” This is a wonderful rendition, one with a natural and beautiful flow. That’s followed by the album’s title track, which features more excellent work on guitar throughout the track. But again it is Samoa Wilson’s vocals that pull us into this song. And in these days of anxiety and depression, this song’s lyrics hold a tremendous amount of appeal. Who doesn’t want to just be horizontal? “I just want to be horizontal/Sleep until the sea starts running dry/I just want to stay horizontal/And let the world go by.” Or at least until the current administration is out of the White House and behind bars. Oh, I love that horn.

“Trust In Me” has a wonderfully cheerful vibe and rhythm, taking us to a better place. “Trust in me in all you do/Have the faith I have in you/Love will see us through/If only you trust in me/Come to me when things go wrong/Cling to me and I’ll be strong/We can get along/As long as you trust in me.” Well, things have certainly gone wrong out there. I hope everyone has someone to cling to in these frightening and infuriating times, someone to dance with in the kitchen, someone to trust in, for it is going to make all the difference. That’s followed by “I Cried For You,” a song that Teddy Wilson And His Orchestra recorded and released in 1936, featuring Billie Holiday on vocals. Samoa Wilson and Jim Kweskin pick up the pace a bit, and this track swings and moves. As Samoa sings “I cried for you/Now it’s your turn to cry over me,” the instruments seem to be in on the joy she is feeling. Are they carrying her along away from despair, or is she leading the way? This track is just a delight, the horns doing flips and leaps, almost as if they were sentient creatures, friends delighting in Samoa Wilson’s new perspective, engaged in a wonderful dance. And that piano work is fun. Things then get just a bit bluesy with “The Candy Man,” a song recorded by Rosetta Howard With The Harlem Hamfats. It’s a cool track, and I love those backing vocals responding, “Yes, the candy man.”

This rendition of “Inch Worm” begins with a sweet folk sound, even including some nice work on mandolin. This sweet vibe is given time to build before Samoa Wilson’s vocals come in, nearly a minute into the track. Jim Kweskin shares vocal duties with her on this one. It’s kind of a goofy song, but has something of a magical quality that is appealing. Some of the instruments feel like winged creatures flying around the garden. Everything seems to come alive. That’s followed by “That’s Life I Guess,” another song released in 1936 by Teddy Wilson And His Orchestra, with Billie Holiday on vocals. Jim Kweskin begins this one on vocals, telling us “This is not a torch song/And this is not a complaint/I won’t brand you a sinner/And I certainly won’t paint myself to be a saint.” And then we get the woman’s perspective when Samoa Wilson takes over. “Nobody knows how cruel fate can be/How close together love and hate can be/Goodbye, just clean the slate for me/That’s life, I guess.” This track features some more great work on guitar. The band seems to be having a great time on “Me, Myself And I,” a song recorded by Billie Holiday in 1937. These guys are grooving along without a care, the bass keeping everything going. It sure does help to hear this music, like a bright streak across an otherwise dark landscape, a reminder of something better and of the possibility of its return.

I have said it many times, and I’ll say it again: You can never go wrong with Gershwin. Samoa Wilson and Jim Kweskin deliver a nice rendition of “Our Love Is Here To Stay,” the song’s opening lines being ones that seem to have been written for us today: “The more I read the papers, the less I comprehend/The world and all its capers, and how it all will end.” While the world crumbles, our love seems to be the only stable thing. So true. Well, there is nothing subtle about “Kitchen Man,” a silly and delightful song that Bessie Smith recorded in 1929. How about a medley of this one and Meri Wilson’s “Telephone Man”? “Anytime he wants to, why, he can use my sugar bowl.” Well, all right! Samoa Wilson and Jim Kweskin then take us to Hawaii with “At Ebb Tide,” a sweet tune with a pretty vocal performance, and nice harmonies in the second half. Sean Read and Maddie Read Clarke provide backing vocals on this track. Jim Kweskin and Samoa Wilson also deliver an interesting and cool rendition of Cole Porter’s “Easy To Love,” with Samoa Wilson’s voice supported at first by piano, and then prominently by bass. The version by Teddy Wilson And His Orchestra with Billie Holiday on vocals was released in 1936.

“He Ain’t Got Rhythm” is another fun number, written by Irving Berlin, with some additional lyrics by Jim Kweskin. There is a delightful energy to this track, and in particular to Samoa’s vocals. The album concludes with a couple of songs about the moon, the first being a bright rendition of “I Wished On The Moon,” a song that Teddy Wilson And His Orchestra recorded in 1935 with Billie Holiday on vocals. “Wished on a star/And asked for a dream or two/I looked for every loveliness/It all came true/I wished on the moon for you.” Then we get a beautiful rendition of “Someone Turned The Moon Upside Down,” a song recorded by Tony Bennett in the 1950s. It is a song of heartache and of longing. “All the tales I hear round about/They nearly turn my heart inside out/I try so hard to smile/But nothing seems worthwhile.”

CD Track List
I Just Want To Be Horizontal is scheduled to be released on June 12, 2020 on Kingswood Records.
Posted by Michael Doherty at 3:18 PM