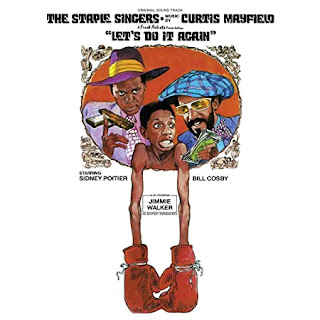 Fans of The Staple Singers are getting a treat next month, as four of the group’s albums are being re-issued, each with bonus tracks and new liner notes. The four albums are all from the 1970s: Let’s Do It Again (from 1975), Pass It On (from 1976), Family Tree (from 1977) and Unlock Your Mind (from 1978). The first of these albums, Let’s Do It Again, is the soundtrack to the 1975 film starring Sidney Poitier, Bill Cosby and Jimmie Walker. It is also the first album the group released after leaving Stax. All the songs were written or co-written by Curtis Mayfield, who also produced the album.

Let’s Do It Again opens with the title track, a song with a good, sweet groove, sounding so smooth and delicious. This certainly marks a change in the type of material the group was performing. After all, the music these guys were known for was more in line with gospel, as well as songs about social issues such as “Respect Yourself” and “Are You Sure” from Be Altitude: Respect Yourself, an album that was re-issued back in 2011. On this track they are celebrating physical love. The next track, “Funky Love,” is also about physical love, with lines like “Get down and do it ‘til the morning comes,” delivered with the same passion and gusto that they sang of more spiritual matters. And, as the song’s title promises, there is some funk to this one. There is also a cool section of vocals and percussion. I love the vocal play.

They slow things down a bit with “A Whole Lot Of Love.” This is a song I imagine a lot of folks can appreciate, its opening lines being “Sometimes this life is so hard/Things are so bad/Rough times, then tomorrow seems twice as sad.” They then urge us, “But don’t you give up/No, your life isn’t over/Look to the good side.” An important message to keep in mind, I think. Plus, it’s a gorgeous song with a passionate lead vocal performance, and backing vocals that are more in line with that great gospel sound. They then get delightfully funky again with the totally enjoyable “New Orleans.” Here is one that might get you dancing with its fun groove. While you’re largely stuck at home, turn your place into a disco. There will be plenty of space on the disco floor for you to get down; no worry about crowds. Then the funk and the gospel elements are combined in “I Want To Thank You,” another enjoyable number. The rhythm is fun and funky, and some of the lyrics are addressed to Jesus directly: “We become stronger because of sacrifice/Inspiration is what you gave to my life/It’s true love for you/Spiritual affection, lifelong protection/Jesus, I just want to thank you.” There is a joy here that will raise the spirits of believers and non-believers alike.

The rest of the original album is made up of instrumentals. Well, songs that are largely instrumentals, for there is some vocal work in “Big Mac,” mostly just the whispering of the name. It is a funky number, a fun jam featuring some good work on bass. That’s followed by “After Sex,” a tune that has a dreamlike quality. There are vocals here too, but just a gentle “Oooo” that is repeated as part of the musical landscape that is created. It’s a pretty piece, quite relaxing, and ends up being one of my personal favorites. The original album concludes with “Chase,” a lively and exciting number, a very cool instrumental track, and the only one that Curtis Mayfield didn’t compose by himself. This one is credited to the whole band: Quentin Joseph, Philip Upchurch, Gary Thompson, Floyd Morris, Joseph Scott and Curtis Mayfield.

This disc contains three bonus tracks, the single versions of “Let’s Do It Again,” “After Sex” and “New Orleans.” Each of these versions is shorter than the album versions. It is no surprise that the album’s title track would be released as a single, but it is interesting that “After Sex” was included on a single. It was the flip side to “Let’s Do It Again.” This one is significantly shorter, approximately half the length of the album version. And I suppose I could see how some folks might get bored with the longer version. The longer one feels almost like a meditation piece, where you want to just let the track’s vibe carry you away. This shorter version is just as beautiful, but at a length where everyone can appreciate it. The final track is the single version of the funky “New Orleans,” which was paired with “A Whole Lot Of Love.” In this song, they sing “I got my mind blown in Louisiana,” an experience everyone should have at least once in his or her lifetime.

CD Track List
This special re-issue of Let’s Do It Again is scheduled to be released on June 5, 2020 through Omnivore Recordings.

Posted by Michael Doherty at 8:09 AM