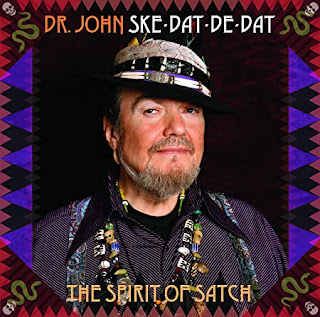 In 2014, Dr. John released Ske Dat De Dat: The Spirit Of Satch, a fantastic tribute to Louis Armstrong, which found the singer and pianist joined by a lot of special guests, including The Blind Boys Of Alabama and Bonnie Raitt. Now that album is being re-issued, with different artwork on the cover, and will be available on vinyl. We lost Dr. John last June, a distinct and joyful voice in music, and the world just isn’t the same since then. But the re-issue of this spectacular album should help us cope.

The album opens with a really hopping rendition of “What A Wonderful World,” a song written by George Weiss and Bob Thiele. It begins with the first lines delivered a cappella, featuring The Blind Boys Of Alabama, and then kicks in with a bright, positive sound. Nicholas Payton delivers some absolutely wonderful work on trumpet. This is  a song I want to hold onto in these days of anger and division and fear. And in this rendition, Dr. John offers a celebration of life, and of this planet we all have found ourselves on. Then he gets funky with a great and unusual rendition of “Mack The Knife,” the horns delivering some excellent work, with Terence Blanchard shining on trumpet. On this track, Dr. John is joined on vocals by Mike Ladd, who delivers a rap in the middle of the song, even making a reference to Stephen King’s The Shining (a book I happen to be re-reading at the moment). And Dr. John sounds so damn cool here (well, he always did, didn’t he?). That’s followed by “Tight Like This,” with Dr. John joined on vocals by Telmary Diaz, delivering some of the lyrics in Spanish. And yes, this track features more wonderful work from the brass section, particularly Arturo Sandoval on trumpet.

Bonnie Raitt joins Dr. John for a seriously cool rendition of “I’ve Got The World On A String.” She sings, “I’ve got a song that I sing/I can make the rain go anytime I move my finger/Lucky me, oh can’t you see/Baby, I’m in love.” Oh yes! And Dr. John tells us, “Life’s a beautiful thing/Long as I hold the string.” They are clearly having a great time singing together, making this song a delicious duet. I love the way they approach this song, enjoying this rendition much more than, say, the Frank Sinatra/Liza Minnelli duet version. That’s followed by “Gut Bucket Blues,” featuring Nicholas Payton on trumpet. This lively rendition has a good amount of funk to it. It is followed by “Sometimes I Feel Like A Motherless Child.” I think the first version of this song I ever heard was that by Richie Havens, in the documentary film of the Woodstock concert. I loved the raw energy of that performance. There is what sounds like a genuine need in his passionate delivery. The version here has a much different approach; it is much smoother, kind of gentle, with vocals by Anthony Hamilton. I took me a moment, but I got into it.

Wendell Brunius and The McCrary Sisters join Dr. John on this sweet and soulful rendition of “That’s My Home.”  “Folks say how do you do/And they really mean it too.” Sounds so good, doesn’t it? “I’m always welcome back/No matter where I roam.”  I hope each of us has a place where we always feel welcome, and I hope we can all visit those places soon. The McCrary Sisters also sing on a moving version of “Nobody Knows The Trouble I’ve Seen” that has a great deal of soul and features Ledesi Young on lead vocals. There is tremendous amount of joy in Ledesi’s performance, helping to make this track stand out. Then The Blind Boys Of Alabama join Dr. John again for “Wrap Your Troubles In Dreams,” a song Louis Armstrong recorded in the early 1930s. Terence Blanchard is featured on trumpet on this uplifting track. I love the way that trumpet rises up to lead us out of the mire. There is something almost magical about it. This is a glorious and wonderful track.

Things really take off with “Dippermouth Blues,” a lively and totally enjoyable track featuring James Andrews, a musician from New Orleans who was one of the first to perform in the city following Hurricane Katrina. Here he delivers some excellent stuff on trumpet, and Dr. John rocks that piano. This entire album is good, but this track is certainly a highlight. It’s followed by “Sweet Hunk Of Trash,” featuring Shemekia Copeland on vocals, delivering those lines with attitude, with Dr. John reacting, a playful kind of duet. It was Billie Holiday who sang this one with Louis Armstrong. The band backing Dr. John and Shemekia Copeland jams on this one a bit. Then Arturo Sandoval joins Dr. John on trumpet for a gentle and pretty version of “Memories Of You,” which features a wonderful vocal performance by Dr. John. The album concludes with a popping version of “When You’re Smiling (The Whole World Smiles With You)” that features the Dirty Dozen Brass Band. A great ending to this spectacular album.


Ske Dat De Dat: The Spirit Of Satch is scheduled to be re-issued on June 5, 2020, and will be available on vinyl.
Posted by Michael Doherty at 12:19 PM