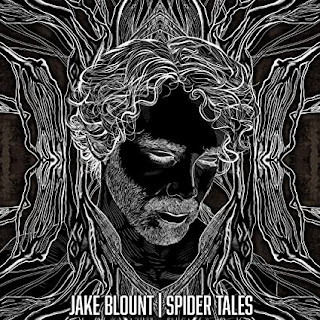 On his new album, Spider Tales, banjo player, fiddler and vocalist Jake Blount digs deep into the roots of folk and blues to deliver excellent and honest renditions of some classic material, some you certainly know (such as “Where Did You Sleep Last Night”) and some you might not be all that familiar with. The liner notes include interesting information on each of the songs chosen for this album. By the way, the Spider of the album’s title is a trickster with an ample supply of wit and wisdom, which he uses against those who oppress people, and the songs contained here are pertinent as we move into a challenging and frightening decade and seek the strength to deal with the troubles the lie ahead. Joining Jake Blount on this one are Tatiana Hargreaves on fiddle, Judy Hyman on fiddle, Jeff Claus on banjo-uke, Nic Gareiss on percussion, Rachel Eddy on guitar, and Haselden Ciaccio on bass. The album includes several instrumental tracks, some of which are banjo and fiddle duets.

The album opens with “Goodbye, Honey, You Call That Gone,” an instrumental piece from banjo player Lucius Smith. This track consists of banjo and percussion, and from what I gather from the liner notes the percussion is all done with the feet. So there is a loose and intimate vibe to this track, a back porch kind of thing happening. You might find yourself adding your own percussion as you listen – a knee to slap, whatever is handy. But there is also a rather somber vibe to the piece, an unusual and distinct style for the banjo (if you listen to the original recording of Lucius Smith performing this tune, you’ll hear a woman – Shirley Collins – remarking, “I’ve never heard anyone play the banjo like that”). That’s followed by “Roustabout,” a song from banjo player Dink Roberts. Tatiana Hargreaves’ fiddle plays a prominent role on this track, seeming to be the driving force. This one is fiddle, banjo and vocals. “Where you going, you roustabout/Where are you going fishing.”

Jake Blount delivers a pretty and moving rendition of Lead Belly’s bluesy interpretation of “Where Did You Sleep Last Night,” a striking song that has been covered a lot over the years, telling a dark tale in which a man is decapitated by a train. This tale and this song have many variations. On this rendition, both Jake Blount and Hargreaves are on fiddle and vocals. Their work on fiddle is absolutely wonderful. Rachel Eddy is on guitar, and Haselden Ciaccio is on bass. Jake changes the line “My girl, my girl” to “My boy, my boy,” making it a gay couple. That’s followed by “Old-Timey Grey Eagle,” a bright, fairly fast-paced tune from fiddler Manco Sneed, here presented as a duet by Jake Blount on banjo and Tatiana Hargreaves on fiddle.

“Move, Daniel” is an interesting song composed by slaves and sung to help guide one of them safely along so as not to be caught by their master. It is incredible that music was used that way, and that the slave owners paid so little attention to what they were singing that they didn’t catch on to the purpose of the song. After all, it is not all that subtle. They are essentially shouting out directions, “Go the other way, Daniel.” In a recording of this song by The McIntosh County Shouters, they tell the story of this song, about the slave named Daniel who was stealing some meat for a party. It is also interesting that the song has a gospel vibe. Tatiana Hargreaves plays fiddle on this rendition. “Blackbird Says To The Crow” is instrumental tune from fiddle player Cuje Bertram, this version featuring banjo, fiddle and percussion. Yup, more work from Nic Gareiss’ feet. Cuje Bertram’s music survives only because of home recordings he made when he was in his seventies, since the record companies wouldn’t produce so-called “race records” featuring old-time music. That’s followed by “Brown Skin Baby,” a solo effort by Jake Blount on fiddle and vocals, and then by “English Chicken,” an instrumental track featuring banjo and fiddle. I love the timeless quality of these tracks. It seems some care has been taken to create as authentic a sound as possible. There is also joy heard in the playing.

“Rocky Road To Dublin” is an Irish song written (as far as we know) by D.K. Gavan in the 1800s. It is a hell of a tricky song to sing. You have to have pretty good command of your lungs to get all the words out. Many folks avoid that trouble by performing instrumental renditions. Osey and Ernest Helton were a Cherokee banjo and fiddle duo who performed the song, and this version by Jake Blount takes its inspiration from that rendition. Both Jake and Tatiana Hargreaves are on fiddle. Jeff Claus plays banjo-uke, Rachel Eddy is on guitar, and Haselden Ciaccio is on bass. There is a delightfully bright sound to this rendition, so put on your dancing feet. Then Jake Blount takes us into gospel with a good rendition of “The Angels Done Bowed Down.” On this one, Jake provides the vocals, and the full band backs him, including both Tatiana Hargreaves and Judy Hyman on fiddle, Jeff Claus on banjo-uke, Rachel Eddy on guitar and Haselden Ciaccio on bass.

While most of the songs on this album have been around a long while, “Beyond This Wall” is a tune written by Judy Hyman, who co-produced this album with her husband, Jeff Claus. It is a banjo and fiddle instrumental tune featuring Jake Blount on banjo and Tatiana Hargreaves on fiddle. It is a moving and somber number. That’s followed by “Boll Weevil,” a solo performance by Jake Blount on vocals and fiddle. A spider actually plays a part in this song: “Yonder comes a spider/Crawling up and down the wall.” Then “Done Gone” is a fun, lighter number, another banjo and fiddle tune. The album concludes with “Mad Mama’s Blues,” a seriously cool and delightful song from Josie Miles. This playful and wonderful track features some excellent work on fiddle by both Jake Blount and Tatiana Hargreaves, and also probably features my favorite vocal performance of the album. The lines “You don’t believe that I’m sinking/Just look what a hole I am in” also show up in “Stealin’.” But it is that fiddle part that really makes this track something special. The pace suddenly picks up in the second half. As delightful as this song is, its lyrics contain a pretty serious warning. This track fades out, giving us the sense that that instrumental section is continuing for a while. I could certainly have used another two or three minutes of this one.

CD Track List
Spider Tales is scheduled to be released on May 29, 2020 on Free Dirt Records.
Posted by Michael Doherty at 9:08 AM